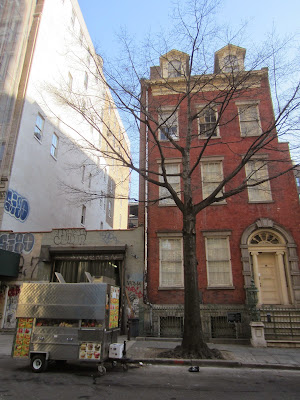 On April 8, the Landmarks Preservation Commission (LPC) approved plans for an 8-floor hotel to rise next door to the landmarked Merchant's House Museum at 27 E. Fourth St. (Read Curbed for all the background here.)

And yesterday, the developers officially filed those plans with the DOB. The proposal shows a 17,141 square-foot building (13,755 residential; 3,386 commercial) with 28 "dwelling units" or hotel rooms here between the Bowery and Lafayette.

The April 8 decision came nearly 18 months after the developers first brought the proposal before the LPC. "Yeah, the building is boring, but it's appropriate," Commissioner Michael Goldblum said of the latest hotel renderings, as Curbed reported.

During this process, preservationists and museum advocates discussed how the construction could possibly damage the circa-1832 Merchant's House. Of particular concern: the 182-year-old building's original plasterwork, "which is considered by some experts to be among the finest in the nation," according to The Villager.

Demolition to the east of the Merchant’s House in 1988 caused nearly $1 million worth of structural damage and forced the museum to close for two years, but it spared the plaster. Now, the advocates believe jackhammering and bulldozing on the western lot will leave the museum in danger of losing the plaster forever — or, at the very least, require highly expensive preparations just to minimize that damage. Previously on EV Grieve:
Report: Landmarks Preservation Commission OKs plans for hotel next door to the Merchant's House
Posted by Grieve at 5:20 AM

How many more hotels can these few blocks sustain? I assume that these hotel patrons want to see New York and be able to say that they stayed in the cool EV, but clearly it's lost all it's cool, and the only thing to be seen is all the other tourists. "When will it ever end, when will it ever end?"

The LPC is a joke.

What is this going to do to the Merchant House Museum? I shudder to think. And the people next door will have their windows a few inches away from concrete walls. This is just getting worse and worse. Other major world cities have very strict zoning ordinances, which preserve their architectural integrity. Here, we just build one eyesore after another.

This city has lost all sense of culture, history and has sold its soul for a quick profit.

It is such a shame someone or some institution (not NYU) did not buy this piece of land and taken a preservationist approach to it. Our history is in the hands of short term developer sharks which only care about making money no matter what the cost.

Why do we even have a Landmarks "Preservation" Committee? And when will there be a turnover from the pro-development tools Bloomturd put on there to people hopefully more "preservation"-oriented?

Gotta love how the people in 25 E4th with windows facing Merchant House are just shit out of luck. Yet one more case of people losing valuable natural light.

But I'm sure the RE spinmeisters should be along any minute now to spit out their same tired talking point 'New York is all about chaaaaange'.

JAZ, you are so right, but this is standard now in New York, where your rights don't stand a chance against those of a developer's. 533 East 11th Street, right next to where the Spink Houses are going up, used to have a sister building, 535, and they shared a very large "dumbbell" airshaft. 535 came down in the mid-1980s, so 533 had tons of sun and air. Now, the Spink Houses have been built to within 6 inches of those eastern windows, and I can only imagine the darkness in those apartments that used to have such lovely exposure. I see that in many of the pics Grieve posts - little buildings with windows that are about to be blocked by monstrous new buildings, buildings made of wall to ceiling glass so the inhabitants can freely enjoy the natural light they have helped steal from their less fortunate (read" rich) neighbors.

"And when will there be a turnover from the pro-development tools Bloomturd put on there to people hopefully more "preservation"-oriented?"

That will most likely have to wait until after deBlaz is out of office, if then.

Hopefully someone will come to their senses and stop this project. It makes no economic sense--can't run a hotel this small and earn a real return.

Plus, how can you approve a plan that was created by an architect that was forced to surrender his license when he went to jail? This is how we protect a landmark? This is like a reality TV show gone off the rails....

Walter, I left NYC for a teaching gig in Richmond VA in early 2001, and can tell you even medium cites like my current home have better zoning and historic preservation laws. My neighborhood, the Fan District, with the exception of a few blocks lost to VCU in the late sixties/early seventies, is about 95% intact.

Disgraceful. Why couldn't someone (the city, a benevolent gazillionaire) buy that space and make a period garden to go with that beautiful house?

" how can you approve a plan that was created by an architect that was forced to surrender his license when he went to jail?" Business as usual for the City of New York. a very entrenched apparatus.

There is a period garden in the back of Merchant House, a sizable one.

I hope it's a Froyo Hotel.

Thanks for the info. I'm seriously considering re-locating. Because what's left of NYC bears absolutely no resemblance of what I originally came here for. I don't wanna see the end of that transformation.

Would you kindly tell me who that architect is / was. Since he's convicted, it obviously is a matter of public record, so slander is not an issue. I did a search, but didn't find anything.

Merchant’s House Museum advocates are redoubling their opposition to a proposed nine-story hotel next door to the E. Fourth St. landmark after learning that two representatives of the hotel project pleaded guilty and served time in separate federal criminal cases several years ago.

The two men ... are Edward Carroll and Constantine Fotos.

Carroll pleaded guilty to obstructing justice and misleading a grand jury in 2002 during a federal corruption case against a business associate involved in elevator contracts for the M.T.A. headquarters building at 2 Broadway.

Carroll served five months in prison, plus two years of supervised release and five months home confinement. As a result of the conviction, Carroll surrendered his architect’s license in 2010.

Fotos pleaded guilty in 2005 to illegally removing asbestos while managing a construction project for Phillips International at 13-25 Astor Place. He also pleaded guilty to misleading a federal Occupational Safety and Health Administration investigation into the incident and served one year in prison and two years supervised release.

Unfortunately for the residents next door Lot Lined windows are Illegal and have every right to be covered up. This is common knowledge but they were hoping to get away with it being so close to a landmark that nobody would try to develop. Well they were wrong.