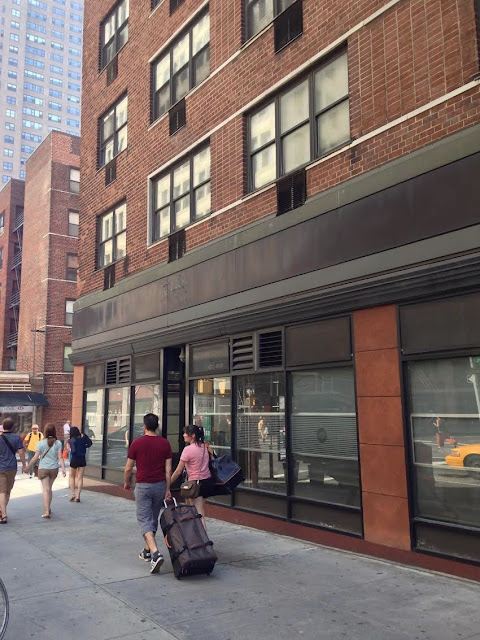 Last December, Silver Spurs got rent-hiked out of its 34-year-old home on Broadway and East Ninth Street (prompting some teary letters from children in the process).

Now comes word of a new tenant in the diner's former space — another NYC branch of Teavana, a specialty tea and tea accessory retailer.

There isn't any signage up yet to indication the shop's arrival.

In December 2012, Starbucks bought the Atlanta-based Teavana for $620 million.

The other Silver Spurs location remains open on LaGuardia Place.

Thanks to EVG reader Eric Bieber for the tip
Posted by Grieve at 5:19 AM

Because if there's one thing New Yorkers love more than biscuits its tea.

I heard thi sis the place where they force-sell you everything you don't really want...

A tea shop doesn't make that much sense because 1) nobody around here drinks tea and B) unlike coffee tea requires no special equipment or know-how to brew. Futilitea.

I love really good specialty tea. Only drink that, no coffee. But I would rather go to Silver Spurs and get a cup of crappy Lipton rather than a silvertip flowery broken orange pekoe at Teavana any day of the week.

Why does everything have to be so hyper-niche?

I've noticed the tea shops are doing quite well. There are enough people who want something besides booze and want a 'nicer' experience than the cafe.

Anon 11:31PM: Because there is a large and growing amount of people who things to be special ALL THE DAMN TIME! It comes from watching too much reality tv.

I bought one of those glass ones for some reason. Haven't used or touched the thing in eight years!

I'm a brit (and therefore a tea drinker) and not one of these fancy places can make a decent cup of black tea.

They are all farting around with various herbal concoctions made with lukewarm water and a pile of flowers and buds.

I would also rather have Silver Spurs, some decent, cheap diner food and a cup of lipton.

Brit 9:16 makes a good point. "Tea" is the common name for the drink brewed from the leaves of one specific plant--camellia sinensis. But here in America us tards will put any random junk in some hot water and then call it "tea". That's why I have little hope for a "Teavana" or some such venture. Most NYC tards couldn't even tell you the difference between an orange pekoe and a hibiscus-rose hips infusion. "Durrrr, Dunkin Donuts coffee drinks are pretty good!"