2 Bros. is really gone on 1st Avenue; plus more dumplings for the East Village 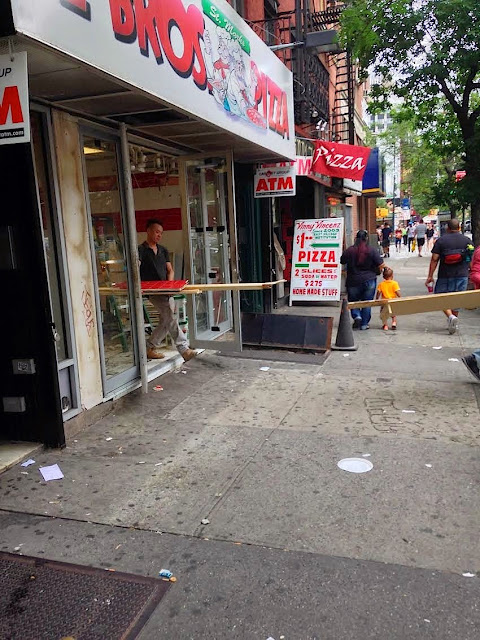 An EVG reader spotted workers removing the ovens from the First Avenue 2 Bros. back on July 18.

And we watched workers gutting the space all weekend long. (Well, we did other stuff too that weekend, like go to Key, wash a few loads of laundry and watch some TV.) 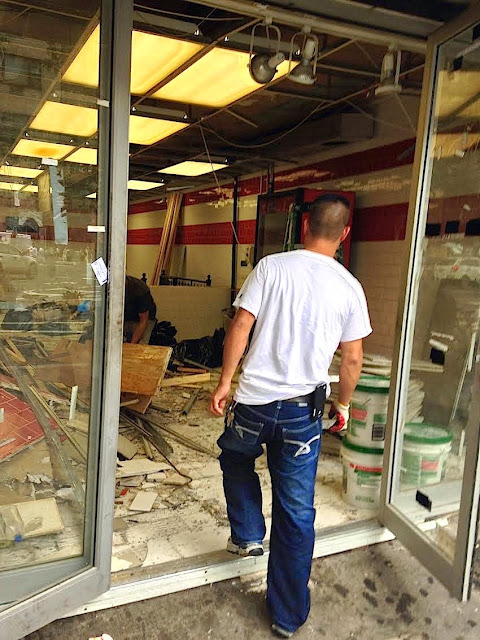 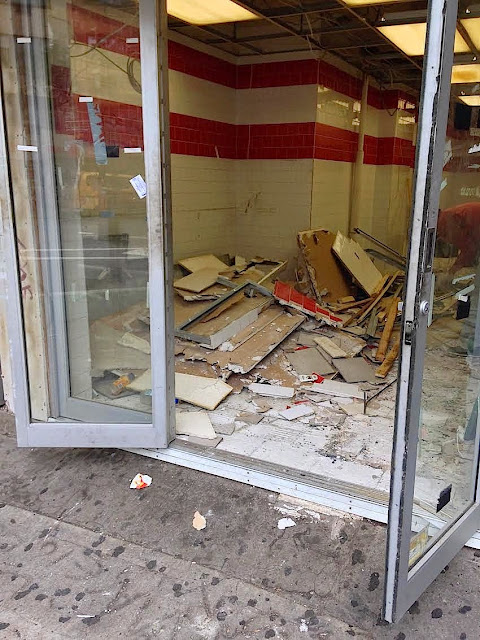 However, one of the workers told a reader that 2 Bros. was just remodeling the space. (We've seen this closing fake-out before.)

And the 2 Bros. sign remained up here between East 13th Street and East 14th Street until this week. When this new signage arrived for Hibachi Dumpling Express. 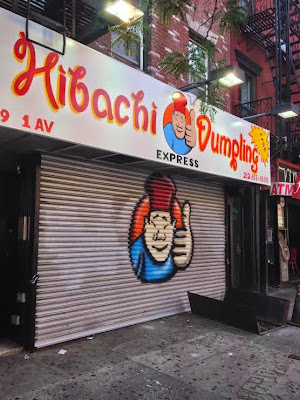 It will be the latest in the East Village dumpling express. Mimi Cheng's Dumplings opened last month at 179 Second Ave. near East 12th Street. And The Bao just debuted at 13 St. Mark's Place.

How are they? Dunno! However, Robert Sietsema offered up a review at Eater on Monday.

His quick take on The Bao: "Though this may not be the best Chinese restaurant in the area, it has the best soup dumplings."
And Mimi's?: "The dumplings seemed a little lackluster on that first visit, but had improved considerably by the second."
Posted by Grieve at 4:57 AM

I believe the y removed the dunkins donuts up on this block too, which galls me, there was a good indie donut shop here that dunkins killed. remember independent donut shops? when donuts were actually good?

I noticed the sign the other day, and on the top right corner above their name it says "free." So I guess that means we have gone from Dollar Pizza to free dumplings. At least Vinny's won't have to compete with the cheap pizza and million watt fluorescent lights anymore.

I'm hoping for a headline of "Bros are really gone on 1st Avenue" (or 2nd ave., 3rd ave. Avenue A, B, C..., or just the whole EV altogether). But that day comes when there's peace in Gaza.

@nygrump, if you can stand to leave the EV, take the M14 to 7th Avenue, and right there when you get off is Donut Pub, source of the best donuts I know of in Manhattan.

Gojira is correct, Donut Pub is the best.

Thank the lord that pizza place is trashed and gone. The worst pizza ever. Those $1 places are a disgrace. The dumbing down of pizzaland. I can't stand it. And I'm not being a hipster, snob, or yuppie, and I'm not begrudging someone trying to make a living. Pay one more dollar and change and get a decent slice. We're not living in a war torn, starving little kids area. At least not yet.

Uh yes you are - Mr pizza.snob- sorry that in the most expensive city in America folks could use a cheap bite- espec the working poor/ homeless - I hope you never end.up in a situation where literally every dollar important because you are clueless- and children being hungry is an issue in NYC - wake up to reality- the dollar pizza isn't the disgrace here you are

I am not really the biggest $1 pizza fan either but certain ones are not that bad and on a broke day when u only have 2 or 3 bucks it helps alot! Especially with food already being expensive in new York city