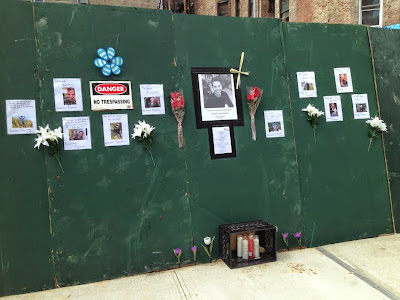 This afternoon, the family of Nicholas Figueroa, one of the two men who died in the March 26 gas explosion at 121 Second Ave., created a makeshift memorial in his honor on the plywood at the scene of the disaster. 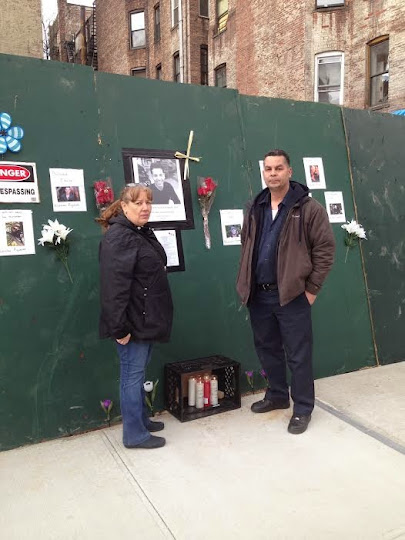 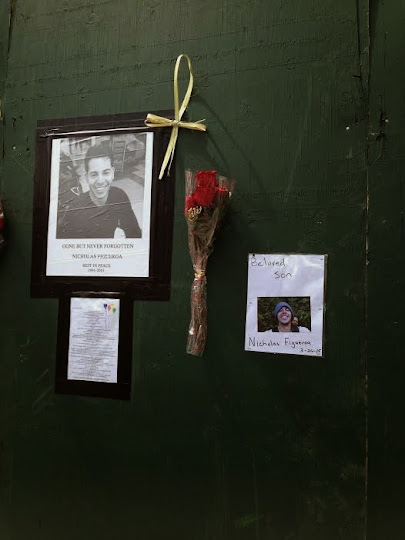 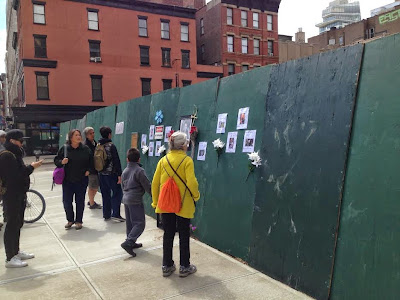 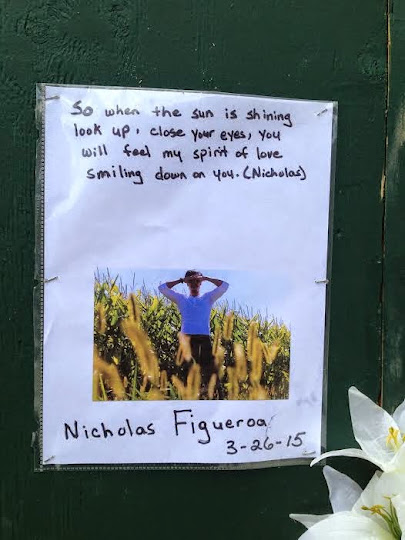 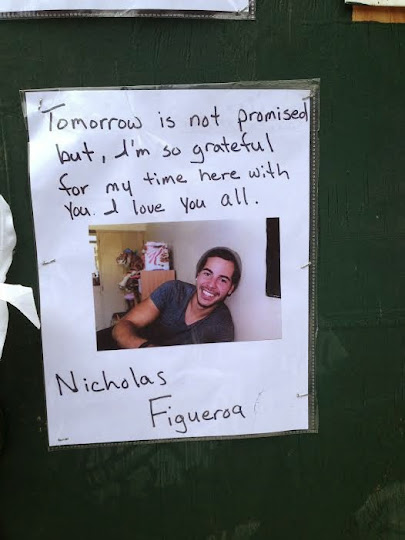 Figueroa's family also left the white roses yesterday on the site where 119-123 Second Ave. once stood. 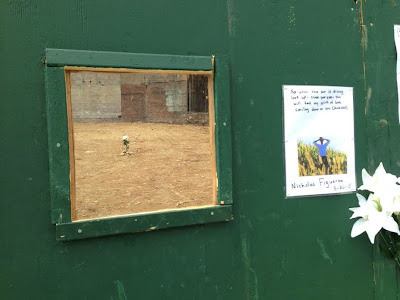 Figueroa, 23, had just finished a meal with a friend at Sushi Park when the explosion occurred. Authorities have said that an illegally tapped gas line at 121 Second Ave. may have caused the deadly blast. The investigation continues.

Thank you to EVG reader Daniel for these photos
Posted by Grieve at 2:54 PM

I think it is lovely that they did this, and I hope there is a more permanent tribute dedicated to their son and the other young man who died in the explosion on the way. It would be fitting if the city would plant a tree and/or place a plaque at the location to honor those who lost their lives.

What a lovely family, I send them warm thoughts and hugs. It is touching to learn about their son and brother. I hope this loss changes the way our city handles inspections and handling of illegal work done here.

I would like to see Moises Locon equally memorialized. Each life is irreplaceable.

If Mr. Figueroa's family chose to share their love and grief with us in that way, that's beautiful and I thank them for it, but I don't see the need to turn it into a contest and demand a matching a memorial for Mr. Lacon. Maybe his family isn't ready to express themselves that way. Maybe they don't know they would be allowed to do do, or that they are expected to, by the tit for tatters here.

Anyone wanna start the Moises Lacon memorial? I'd love to drop off flowers for him but I don't have his pictures.

@Trixie Thank you. I resisted on commenting about a grief pissing contest.

I don't see it as a contest but thinking Mr. Lacon is also a victim here and his family doesn't live in NY.

Wouldn't be nice if we as neighbors can remember Mr. Lacon as our neighbor who lost his life in this tragic incident? I don't mind to drop off flowers for both victims, just to clarify.

Not sure why some ppl think this idea as a memorial contest.

I totally don't understand people who see this as some sort of contest.

TWO men died that day, and it seems reasonable that both deserve to be memorialized. Photo(s) of Mr. Locon exist on the gofundme page for him:

and also on many news sites that covered the explosion and collapse.

Lets not get carried away everyone, both families lost their loved ones. Lets get our community to make the area of buildings 119-121 into a public park in memory of Nicholas Figueroa and Moises Lucon.

What happens to the people who lived in the buildings, are they supposed to pitch a tent in the park?

@2:40pm: Totally agree with you, but good luck getting any genuinely affordable housing built in this nabe, as the forces of government AND developers are against it (which sucks, but is the reality).

It amazes me that there is not even ONE super-rich person in all of NYC (or the USA) who will step forward & just build affordable housing in this area (or anywhere in NYC for that matter) out of the straightforward idea that IT'S THE RIGHT THING TO DO.

There are so many billionaires in NYC - people for whom building affordable housing would barely dent their checking account. If each billionaire put up one building, that would go a long way toward solving our housing crisis.

Please excuse me for daydreaming about rich people behaving altruistically...

Given the inevitable tax bills for that parcel and what will be built on it,it would not be easy for anyone to charge low rents.