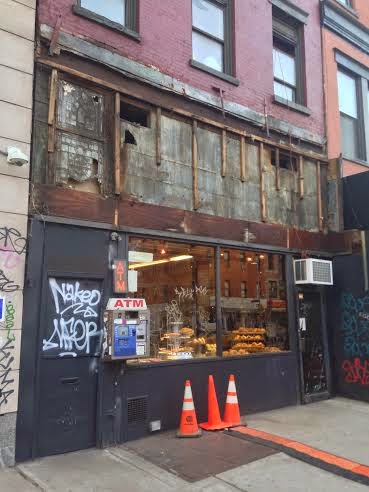 Owner Moishe Perlmutter told WPIX that the sign sustained damage following the deadly gas explosion on March 26. (The sign seemed rather battered before then.) 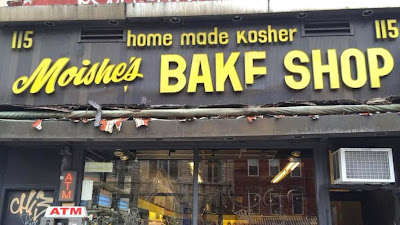 "We got a violation last week that it’s shaking. We have to take it off and fix it," Perl told the station. 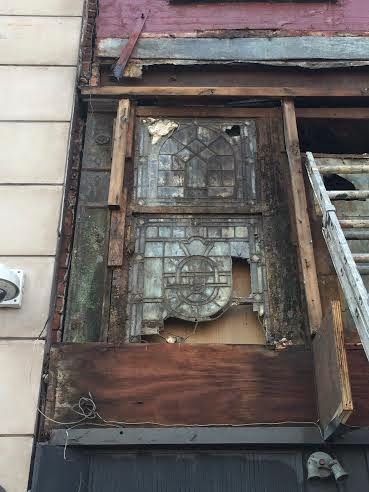 We're unsure how old this glass is. Here's a shot of Moishe's from 1980 via EVG contributor Michael Sean Edwards... 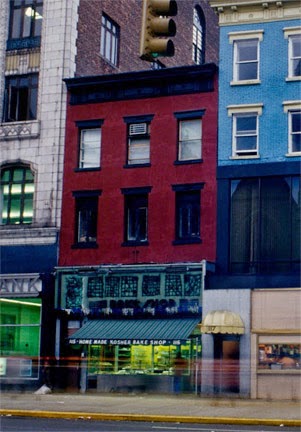 According to the East Village/Lower East Side Historic District Designation Report (PDF!), the Greek Revival building (with Queen Anne style alterations) dates to 1842-43 as a one-family row house. The storefront was likely added in 1908. Moishe's has been here since 1972. (Check out Off the Grid for more history of the building.)

And as we understand it, the sign will be repaired and returned to the storefront.

Previously on EV Grieve:
After midnight, workers remove the Moishe's Bake Shop sign (18 comments)
Posted by Grieve at 4:40 AM

Who says the 1980s were the bad old days. The building was well kept in comparison to today.

I'd imagine those pictures of what's beneath the sign has some of the more dainty readers of evgreive clutching their pearls and fainting away on a divan.

I've always wondered why Moishe's didn't repair the awning or remove the graffiti. (Money?) It discouraged people from going in, such as my friend who was born and raised in Bushwick before it gentrified

I agree with the commenter on the last Moishe's post that it's a delightful shopping experience for crappy food. (The rye bread and mini-hamentashen are good; everything else, meh or worse.) I sometimes buy challah there against my better judgment because I love "the girls" who work there -- one of them always knows (and tells the others!) the minute I walk in to try to find the least, uh, STIFF challah for me. If I'm in there with my kids they always give each of them a cookie in waxed paper for free -- it feels like so old-school in such a delightful way.

I hope they save the stained glass window?

This place is definitely and old-school bakery, an anomaly in the neighborhood, where every new business feels the need to have a 'concept.' Smells great when you walk by. However, the front could use a facelift. It does look somewhat abandoned - they could preserve that sign but fix up the overall treatment.

The graffiti on the window he can't remove because somebody used glass etching fluid.

Even in that crummy shape that leaded glass window is probably worth a lot.

Moshes doesn't provide me with a luxurious experience and I think it should be closed down.

I wonder if the new sign will still say BAKF SHOP?

Screw "concepts" - I don't give a shit about your philosophy of your food - I just want to occasionally eat some fuckin' humentashen and a black and white cookie. Could everyone just eat what they're gonna eat, and cook what they're gonna cook, and then STFU about it? You ate/cooked something - MAZEL TOV! Here's a savings-bond from Tanta Syl. Now go take out the garbage.

And screw the idea that a place has to be "amazing" to stay in business. NYC will never be able sustain places that are only "amazing" unless it has the same 5 places over and over again, which is unfortunately what it's becoming. This used to be a city filled with one-off places where you could find stuff you couldn't find anywhere else, and while many of things were cool and amazing, most weren't - they were just things you couldn't get anywhere else. Now it's shit you can get anywhere and everywhere.

Love,
Monty Brogan out on parole.

One of my favorite George Steinbrenner stories:

Steinbrenner, who would stop to pick up gum wrappers on my concourse, was a stickler for cleanliness. In 1973 he demanded every day that his workers paint over any graffiti on the Stadium. This was war, and Steinbrenner knew he would win. Why? "We can buy more paint than they can," he said. He was right. The graffiti guerrillas eventually surrendered."

RE: the glass etching fluid -

I always wondered about that. So frustrating.

Here are some ideas for cleaning off etching fluid marks, but the ones on their window are probably set in.

I'm so glad to see that they're open again. Love you Moishe's! Best rye bread in the neighborhood and such nice people.

Update: All of these pictures are fantastic but especially the "red" one in the middle . Long live 2nd Ave!