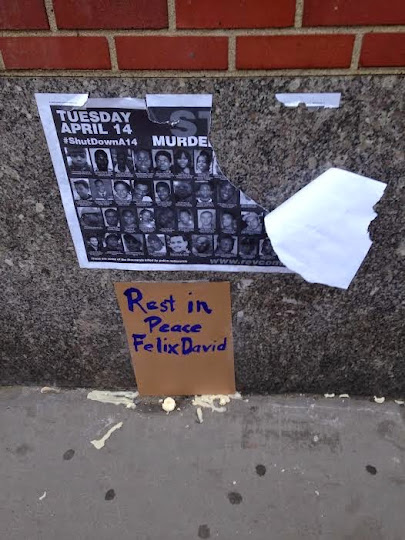 [Avenue A and East 6th Street this morning]

According to published reports, there are now two separate investigations into the shooting death of Felix David inside 538 E. Sixth St. near Avenue B, a nonprofit that provides housing for the mentally ill.

The NYPD is conducting an investigation into the incident that left David dead Saturday afternoon after an altercation with two detectives from the 26th Precinct. Per The New York Times today:

Police officials cited the brutality of the roughly five-minute melee that preceded the shooting on Saturday. Mr. David ripped a police radio from one of the detectives and used it to bash their heads, one official said.

“It’s like hitting somebody with a brick,” said Joseph L. Giacalone, a former detective sergeant who teaches at John Jay College of Criminal Justice. Both detectives were bruised and cut in the face, the police said.

Here's how the Times described David:

An itinerant man with few recent family ties, Mr. David, 24, had a history of mental illness and frequent run-ins with the law, police officials said.

As a teenager, in 2007, he was helped by officers in Midtown Manhattan, who classified him as a runaway. The next year, Bronx officers encountered him in a state of emotional distress and took him to a hospital. He was on medication at the time, one official said.

There were arrests for assault and grand larceny across the city and in Kearny, N.J. From 2009 to 2012, he had spent months, on and off, as a prisoner at Rikers Island. More recently, he lived at two different treatment centers for young people with mental illness.

In total, the Daily News said David had eight prior arrests, six of which involved assault charges.

The detectives were there to arrest David after he reportedly beat and robbed an acquaintance inside City College on Thursday. Per The Wall Street Journal today:

The Manhattan district attorney's office is also investigating the shooting ... "a routine procedure after fatal police encounters," per the Times.

The detectives have been released from the hospital, according to the Daily News.

When NYPD killed a citizen with a police radio the Police Judge cleared him of wrongdoing. They can't have it both ways.

"(The NYPD) can't have it both ways." Sure they can, that's the whole point of being in the NYPD.

Although I think the quote should be "Hitting a radio with a cop's head is like hitting it with a brick."

Right, we should sympathize with the psychotic animal thug rather than the poor bastard trying to arrest him for a robbery that just wanted to be able to be able to go home to his family without his head caved in. Good riddance.

Not unsympathetic to the cops. Doubt they did anything they weren't trained to do. Sounds like a terrifying situation and I'm glad I don't have to deal with that at my work. But there must be nonviolent or nonlethal ways of dealing with people who are sick in the head that don't leave them dead. Our culture is ultraviolent and obsessed with guns and doesn't value human life -- especially black lives. Mental illness shouldn't mean you get put down like a mad dog.

Oh, and nice use of the racial code words there, Mr. "animal thug..."

Re: "mental illness": there is no such thing. Read Thomas S. Szasz's book "The Myth of Mental Illness" and his other works.
There is no doubt that Mr. Felix and others in his position have "problems in living," as Szasz put it. And there is a fine line between being an addict and taking drugs once or twice and deciding to stop. As many people of my generation, I tried grass once or twice, and then realized it would not be a good idea to do it again.
People have the ability not to become addicted to dope and not to engage in uncivil behavior. The fact that some people go over the line should be ascribed to their own poor choices, not to "mental illness."

Bill the libertarian pro-choicer just telling it like it is

I used to work at a residence/school for emotionally disturbed teens/young adults, many of whom had a history of hospitalization and violence. Everyone that worked there had twice-yearly crisis training, and our crisis staff were routinely involved in difficult and often violent incidents. They worked heroically, for far less pay than the police. Staff injuries were routine, and sadly, an accepted part of the job. But there was constant emphasis on ways to de-escalate violent outbursts, to restrain students safely, and to help them try to learn new coping behaviors. And no-one where I worked would EVER have used the kind of dangerous restraint the police employed on Eric Garner. I understand that the police were under attack in this latest incident, but what is going on here with this gut-response to using guns so readily? How can life be so cheap, and how the hell are these cops trained?

Sadly, it is difficult to treat people who are seriously mentally ill because they can be volatile and unwilling/unable to maintain a course of treatment. It's sad for all involved. You can't simply blame the system.

To April 27, 2015 at 2:50 PM - I think the point is you can't believe a word the cops say anymore. Its gotten that bad. Maybe this guy did attack them. I wouldn't doubt it. The cops have to put up with all kinds of scumbags all day long. The cops are the wall most people have to rub up against. The People are tired of the cops always being in our faces. They're searching our bags. reading our emails and listening to our phonecalls. And we're law abiding citizens. we're supposed to just take it.

There's "no such thing as mental illness", huh?

@6:08pm: OK, so what's your proposed solution? Should we disband the entire police force and then people can behave any way they want?

I don't understand the need to demonize either the police or the mentally ill - people are people, and some police officers should not be on the force. Similarly, some people who are mentally ill simply cannot or will not comply with treatment & medication requirements.

I believe that ALL LIVES MATTER, but it's hard to achieve perfection when the reality is that ALL the humans involved in any situation are imperfect.

also the whole story hasn't yet come out.

some people mention racism at play here. now if the cop who fired the gun is black/nonwhite, is there less blame and condemnation? i wonder...

Felix Davis was black. The detectives making the arrest were black and Hispanic.

Dude was a piece of shit who beat up a girl at City College and tried to kill a police officer with a police radio. He doesn't deserve a memorial. Good riddance.

7:21, in response to your response, I side with the police here. They can't be expected to sacrifice their own safety because the person attacking them is mentally ill. Why did you think I was saying disband the police? I didn't say anything like that.

@9:20am: Nowhere did I say you said the police should be disbanded! I asked "what's your proposed solution?"

BTW, what IS your proposed solution?

Isn't it interesting that the more powerful weapons the police acquire and the greater immunity they enjoy against being found collectively and severally liable for their actions against the "proles," the thinner their skins become and the more whiney they get concerning their personal safety? Oh, the poor embattled police, forced to cower behind their mirrored shades, black executioner's uniforms, 'roided up sleeve tattoos and cattle prods. The police are not Constitionally obligated to protect any of you, just remember that.

Two armed cops killed an unarmed black man with mental illness. We are the only country in the world where that sentence isn't a tragedy. There so imply no reason two so called experienced veteran cops walk into a mental facility and kill a 22 year old kid. There should have been doctors there. Letting him go until you catch home later is a better alternative than shooting an unarmed kid dead.

Why isn't there a neighborhood uproar about this?

Part of me wonders if it was not possible to subdue him without killing him, the part of me that has had friends killed by abusive exes, thinks I'm glad she does not have to look over her shoulder anymore.

Sounds like the police were well justified this time. This was a violent repeat offender.