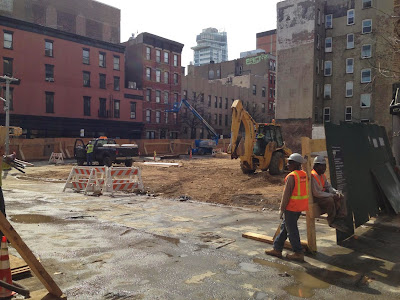 The New York Times dispatches three reporters to dig into the real-estate holdings of the Hrynenko family.

Maria Hrynenko is the landlord who owned 121 Second Ave., where a gas explosion on March 26 killed two men and injured more than 20 other people.

Officials are investigating the cause, which they believe may have been a gas line being improperly tapped to supply newly renovated apartments on the floors above a sushi restaurant in the building, and an effort to cover up the misuse.

Here are a few passages from the article:

Ms. Hrynenko’s husband, Michael Hrynenko Sr., who died in 2004, went into real estate in the 1970s, long before the East Village was chic. The buildings he bought remain a family enterprise. But as the investigation into what went wrong has unfolded, the Hrynenkos have not spoken publicly, and few on Second Avenue seem to have known them well.

Each real estate company of which Ms. Hrynenko is now the principal seems to bear a form of her children’s names — Crystal Apartments L.L.C. for her daughter Crystal, 31; Nasher Realty Corporation may be for two daughters, Natasha, 21, and Sherry, 22. One, M.A.H. Realty L.L.C., may refer to her son, Michael A. Hrynenko, known as Mischou. Another company’s name consists of the initials of all four children’s first names.

In the East Village, Ms. Hrynenko built personal relationships with some tenants. [117 Second Ave. tenant Billy] Calanca said she doled out hugs when they passed her on the street. Her office was across the street from Sushi Park, the restaurant on the ground floor of 121 Second Avenue.

Hyeonil Kim, who owned Sushi Park, recalled swapping details with Ms. Hrynenko about their personal lives, particularly the loss of her husband. “If you hear her life story in the past, you will know it is a tearful story,” he said.

But Mr. Kim also said Ms. Hrynenko was out of touch with what went on her buildings. He described her as in over her head.

You can find the article, which will appear in tomorrow's paper, here.
Posted by Grieve at 7:19 AM

I can't believe the landlord hasn't even issued a statement expressing sadness about the loss of life.

I'll bet she freely doled out hugs:
"Problems in the apt? There, there. Come to momma. Tell momma. Don't call anyone else. Here, there. Come right here into my greedy arms and step away from the rent stabilized, landmarked building. That's right. Just a little further...we wouldn't want momma to get charged with manslaughter, now would we?..."

It's so disturbing to me that this woman has a sympathy campaign going on courtesy of the New York Times. Boo hoo that she lost her husband "tearfully"—EVERYONE who loses a spouse sheds tears, but we don't kill and displace people and pets and businesses with reckless and greedy behavior.

I agree with and understand the necessity of reporting investigative details surrounding the incident and those responsible for it... But I personally find it enraging that national media has long since ignored the catastrophe that is the state of NYC landlords and property management in general. Maybe if enough national attention and outrage had been directed at the circumstances that ALLOWED for the fire to occur in the first place, two people would not have lost their lives as a result. Why is there no mention of what's going on with ICON at the building that Stage resides in? Why no mention of Kushner or Croman?!? Why does the media ONLY give ANY attention to situations that have already resulted in death?
This is just absurd to me. I wonder to what extent these landlords have essentially paid off the media as well as everybody else in the city.

I bet she is going to use the play dumb defense, which is ridiculous. She is a 55 year old woman--my age! It isn't like she is some doddering widow in her 90s who had no idea how to run a building.

Not All The News That Fits Will Get Printed ... said...

The bigger issue is all the people who feel entitled to a rent stabilized apt for life. The EV/LES is full of 100+ year old buildings. Most prob should be replaced. But that would require new construction which is expensive. Repairing all these buildings would be very expensive. Who pays? The RS tenants who want a rent freeze? No one asks or attempts to answer these questions. What is the long term answer? I know the EV Grieve answer is raise taxes and make someone else pay because I somehow earned/deserve a subsidized apt. Pathetic.

Anon 10:09 The answer to who should pay for construction and maintenance of the buildings is very simply, the building owners. Whoever bought and owns the building is responsible for the its architectural integrity as long as rent payments are being accepted from current tenants. That answer is not only common sense, but spelled out in every lease. Additionally, you're a bit out of touch with reality if you think construction and building improvements cost more than a fraction of a fraction of a fraction of the immense wealth that property owners posses. Slumlords in the east village spend more on dinner (literally) than they do taking care of their buildings, making even necessary repairs, and ensuring that their tenants aren't living in a hugely unsafe and hazardous environment.

A Renter Replies to a Landlord Shill ... said...

@Anon 10:09 AM : You say that new construction is expensive, but demolishing an exiting building with rent-stabilized tenants can be done legally:

One of the grounds upon which an owner may end a rent regulated tenancy (rent controlled or rent stabilized) is where the owner intends to demolish the building. However, in such situations, the owner must first obtain the approval of The Division of Housing and Community Renewal (DHCR).

And, yes, repairing the very foundations of a 100+ year old building can be very expensive, more than demolishing it and building new.

So the landlords choose instead to not demo and rebuild nor to completely repair but instead they break down some walls and combine apartments into larger apartments, slap some new paint on the walls, put new appliances in the kitchen, and call it "renovated". Just as was done at the two Hrynenko-owned buildings that burned and collapsed, and just as she is doing at her other buildings (which have thankfully finally be tagged with stop-work orders).

You did say "Pathetic", and I agree completely; the lack of landlord oversight in NYC is pathetic. Maybe this tragedy will start things changing but previous tragedies did not so I am less than optimistic about this being any different.

There needs to be mandatory education and licensing for ANYONE who wants to buy (or who inherits) a building that has tenants in it.

NYC should REQUIRE a classroom course AND a written exam that must be passed for anyone who wishes to purchase a tenanted residential building. As we have seen, if you are a landlord, people's lives are in your hands.

Therefore, any prospective purchaser MUST be required to PROVE their knowledge and qualifications to be a landlord. This must include providing NYC in writing with the name, address & phone number of the landlord's LICENSED plumber and LICENSED electrician who will do all such repair work at the building being purchased or inherited.

And maybe landlords need be required to post a $$$ bond with NYC against things like lack of hot water/heat, etc. that constitute tenant harassment.

This alone would eliminate a lot of the Cromans and Icons.