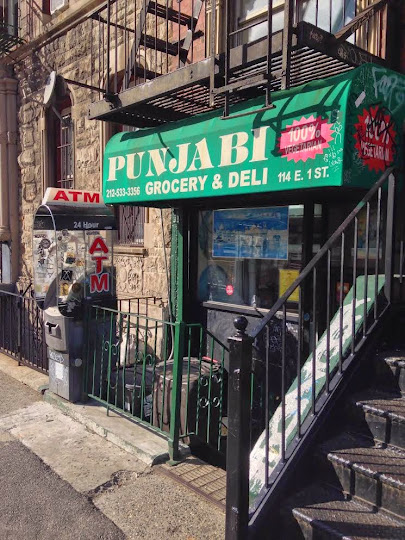 In case you missed this, BoweryBoogie has a good update on the ongoing construction drama that's having a major impact on Punjabi Grocery & Deli's business.

The never-ending East Houston Reconstruction Project is killing off the 21-year-old shop's business at 114 E. First St. between Avenue A and First Avenue.

As previously noted, through the years, cab drivers made up a good chunk of Punjabi's business. The reconstruction, however, has prevented the cabs from being able to stop by for an inexpensive vegetarian meal.

Punjabi started an online petition asking the commissioner of the Taxi And Limousine Commission to approve a taxi relief stand Their proposal is to create a taxi stand comprised of seven parking spaces on East Houston and two additional spots on the bend of East First Street.

What's happening these days? We'll head to BoweryBoogie, who spoke with owner Jashon Singh, for more:

The DOT has been unwilling to talk to, or meet with Singh, according to their lawyer/advocate Ali Najmi. Instead, the city agency is forcing the operators to wait until after Community Board 3 considers the matter next month. This directive isn’t sitting well, though, since there’s apparently been some behind-the-scenes meddling with the application itself. Punjabi accuses the DOT of “rearranging” their CB3 proposal – without consultation – to include a different taxi stand around the corner on Avenue A (4 spots).

“It’s way far down and not what we requested,” Singh says. “[Changing the agenda item] is completely unethical and unprofessional considering DOT hasn’t given us even five minutes of their time.”

During the construction these past five years, Singh said that his sales are down some 60 percent. 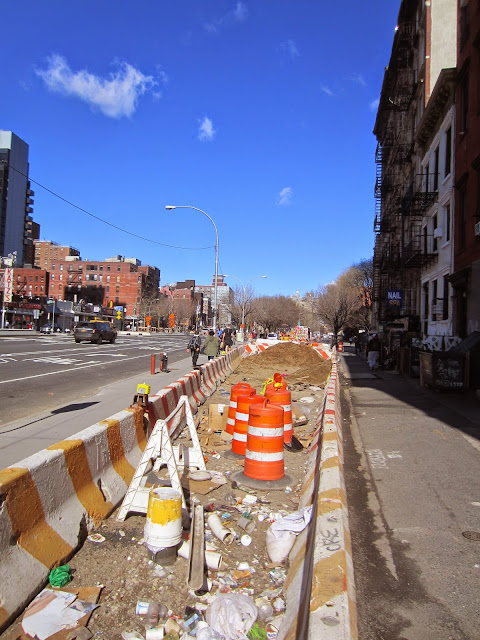 The East Houston Reconstruction Project timeline shows that workers will begin excavating and installing green street plan on First Street at Avenue A this spring.

Which may explain this pile of dirt that arrived back on April 8. 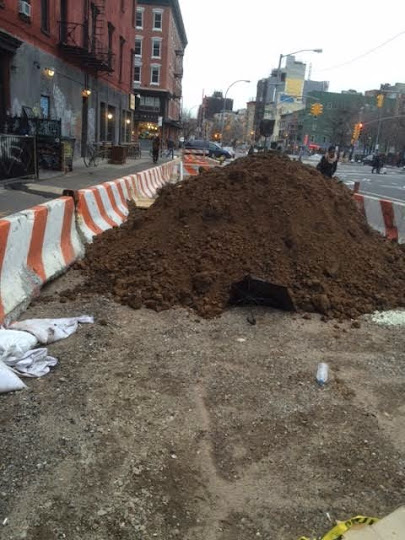 Never-ending construction continues to hurt Punjabi Grocery & Deli
Posted by Grieve at 4:30 AM

Welcome to the socialist world of the DOT! If the streets were owned by entrepreneurs, just like any other business, they would have to finish the job soon to satisfy their customers. Gubments don't have customers, so they treat everyone like a jerk.
Get with libertarianism already.

Bill the anarchist libertarian and anti-DOTer

agh! how can i help! i signed the petition and i eat there, but is there anything else i can do? i love this place!

They only serve cabbies and certain ethnicities. Sorry but if they close its no loss. Relying on cars as customers in Manhattan is a great business plan. SMH.

And imagine if the gas lines were free of onerous regulations! Utopia!

I believe Punjabi serves human new yorkers of any stripe who come down the stairs and have cash. Racism aside, SMH (poster above), the fewer Punjabis we have, the more SMH's we have to live with in this town. And I for one will take Punjabi over the SMH's of the world any day.
Keep supporting this place.
SB

The East Houston project has been going on and will go on and on . . with no rhyme or reason. I've given up figuring it out. When one portion seems finished, another construction zone erupts hilariously. And then is revisited (as with First Avenue) because you were too complacent. It's one of those projects that just doesn't go away, reminding us that we do, indeed, live lives of quiet desperation.

"They only serve cabbies and certain ethnicities."

No, you moron, but many people who consider Punjabi food as their comfort food are cabbies, so they make up a natural customer base.

Anon. 9:36, please go home. Your bridge, for some strange reason, misses you.

Do yourself a favor and just ignore the BTAL. It’s like getting sucked up in the Benjy Vortex on the Howard Stern Show. I got sucked up at least three times.

"Despite the staff's annoyance at Bejy's behavior, some cannot help becoming wraped-in to it, and interested, the same way one cannot help but looking at a crashed vehicle on the highway. This phenomenon is refered to as "The Benjy Vortex". In most instances of The Vortex, Howard and staff finds themselves so irritated by Benjy's absurdity, that they cannot help but try and argue some of the astonishing things he says"

I love punjabi, but don't think they should have a taxi stand for only for cabbies, instead the city should move all the crap on first street and let everybody including taxis park there as it was before.

I live above Punjab Deli (at 114) and I think it's ridiculous that they're trying to petition for cabbie parking (which, by the way, is still available right at the opening to first street next door). No other business in the area would get this privilege, so why should Punjab? Also, there is no WAY their profits went down 60%...I sense some exaggeration here.

Don't get me wrong, I love Punjab, but there's no way they should be allowed to petition for this. How about we start a petition for them to post signage asking patrons to not use the steps of their neighbors buildings as picnic benches? More than half of the time I walk out of my building I almost trip on the people sitting on my steps eating punjab. Drives me crazy.

@1:59 - I live in 110-112 and I am 100% on board with your petition proposal. I am so sick of having to navigate around the Punjabi's stoop kid customers when coming into or leaving my building. They leave their trash and leftovers everywhere and are generally speaking a pain in the ass. I've actually been talking to my super about putting a sign up stating that Punjab eaters are not welcome to sit unless they'd like to talk to the cops.

Who would want to sit on that crap-ass stoop in the middle of that construction zone with all that traffic whizzing by? Sorry but I'm not buying it. This sounds like the same whiner who didn't like the Halal cart on their corner and put up flyers until they moved. People can eat inside of Punjab if they want to, or go over to the park. I have never seen anyone on that stoop or any trash either. Anyway their food is good and if people want to support a nice local ethnic business then please do, otherwise just STFU.