Tonight on Union Square, a rally for Freddie Gray 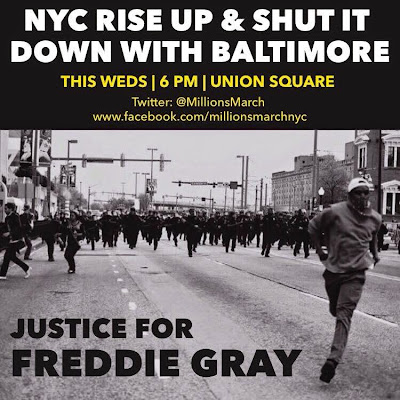 Several readers passed along this information ... via the rally's Facebook event page...

We call on New Yorkers from across the five boroughs, #BlackLivesMatter activists and organizations as well as all organizations that stand for social, economic, and racial justice to rally at Union Square this Wednesday at 6pm.

Rally at Union Square at 6pm on the North Side of the Square (on 17th street) to show the people of Baltimore that we stand in solidarity with them and with their resistance because their resistance is for justice and their justice is our justice.

Thanks for the helicopters overhead all afternoon, NYPD!

Such a soothing sound, it really promotes peaceful demos.

I hate these helicopters! They're going to go ALL NIGHT LONG!

The hell-icopters are a massive waste of taxpayers $, in addition to causing noise POLLUTION. (Where are the enviros when we actually need them?)
I visited the protest, such as it was, and counted over a hundred cops. They certainly don't need any hell-icopters there.
The only legitimate use of a cop-copter would be to chase a violent offender, who was speeding away from a crime scene in a vehicle.
There were no cop-ters monitoring Vietnam War protests and somehow the republic survived.

Let's go to Rosie, or whoever our local pol is, and request that they tell the cops to stop using these things save in legitimate circumstances, such as that outlined above.

Bill the libertarian anarchist
and opponent of government-caused pollution

The difference between baltimore law enforcement and the NYPD is preparedness. NYPD can have 15,000 cops any where in the city within 45 mins. i highly doubt rioting here.

Disagree. Baltimore spiraled badly, at least in part because the cops were told stand back/down. A show of force is a good thing in light of the violence other cities have been experiencing. As far as noise pollution goes - move to the burbs if you want it quiet.

The helicopters are to monitor the protest and crowd size. The NYPD is ready for anything. No sneaking around!!!!!!

The helicopters are not needed to monitor the protest and crowd size. They just waste money, which is at least part of the point of it. More money spent, higher budget requests. $ock it to the taxpayer$.
Re: noise pollution, there is a boundary line where noise becomes too intrusive. Or is it okay if I stand outside your bedroom window and shout into a bullhorn at 3 am? Hey, move to the burbs if you don't like it....

Rioting in this town? Please. If anyone wants to riot in Harlem, or Bushwick, or Bed-Stuy these days, there are so many landlords who'd love the opportunity to sell their gutted buildings to a developer they'd probably lend the rioters the heavy demolition equipment ... which probably explains why not so much as a match is getting lit in this town for poor Freddie Gray.

It's all fun and games til your mom beats your ass on national television.

Never knew there were so many experts on police tactics residing in the East Village-how come all the experts pop up when there is an anti-cop rally in Union Square but never when there is a shooting on Ave D? Do Black Lives REALLY matter?

"As far as noise pollution goes - move to the burbs if you want it quiet."

The move to noise line.

Crazy Eddie -- I think the move to burbs line was sarcasm, but YMMV.

I've said this before:

If police departments dealt with transgressors IMMEDIATELY and SEVERELY, indicating an honest and sincere effort to police themselves and weed out bad kops, the public would have confidence in them and there would be no need to react violently.

Until then, the police have no right to cry "foul" when people respond in kind.

It's a matter of CAUSE and EFFECT....

anon 7:37 PM
can't you think of anything to say except that if you want quiet move to the suburbs.
are you the poster that finds this an appropriate response to any person that doesn't think new york city was created for parties, tourists, students and woo wooers?

"A riot is the language of the unheard" - MLK
I'm glad they're protesting. Don't give me the "It's not ALL cops!!!" I'm not an idiot. I know that. But if I was a cop I'd demand that the few bad ones were brought to justice. No more silence from our NYPD! Stand up with the protestors and demand justice for Freddie. Clean up the force. Zero racists. Protect all of us equally or get a different job. This is America - you're showing the world that we're as horrible as any government that assassinates innocents for who they are - not what they did.
Re: helicopters -
They're nothing more than a siren's song calling me to the protest. Thanks for the alerts guys.
Btw: if they're flying low enough to really see anything but people the size of ants THEN THERE HAD BETTER BE A DAMNED GOOD REASON TO ENDANGER MY LIFE WITH LOW-FLYING HELICOPTERS! You want some bad PR? Crash one of those things on a tiny EV building.

It's just a matter of time until a cop-copter crashes into a building or street.

Yesterday it was sunny, warm, people worked on their tans outdoors, traffic was a nightmare, the city was on edge as police tackled and arrested protesters in droves, and there were helicopters buzzing overhead all night long. To all of those who keep saying "If you don't like it here, then move to LA," yesterday New York was just like LA, and guess what? It really sucked.

Images like the one shown here with one black man running from a horde of policemen/women is so inflammatory. Striking in its commentary, but totally out of context with reality. It's no wonder we have issues like The Great Baltimore Riots (aka The Drugstore Fire Riot.) Disgustiung.

And NYC.... Really people? You are complaining about the helicopters?

I guess the fact that the Baltimore PD is majority black doesn't matter. Are they saying that the black mayor, black police chief, majority black council ( which is all democrat- 9 of the 15 members are black)
Loot and destroy black and brown communities in Baltimore? Really? There isnt a Republican anywhere near Baltimore. Black Democrats have run that town for decades. Its in Obamas backyard and hes been President going on 6.5 years. What has he done? This is ridiculous.

9:47 & 9:55: are you for real?
I live in the EV and own a business in Baltimore. You have no idea what you're talking about. Take the effing train out of Balto sometime and check out what the people of Baltimore call home. That sh!t ain't owned by Black Democrats but it sure us rented to them. A year or two ago I needed to hire a receptionist. I always check the Maryland Judiciary before I call interviewees. If it says they're "African-American" the number of traffic tickets they have is outrageous compared to their same-age-same-sex non-Black counterparts. Myself? White woman from the same area? I have talked myself out of every ticket I've ever gotten but one. I remember reading at that time that Black male unemployment in the city was something like 40%. We're 18 minutes from the city center and the last person I hired who lived in the city had to take two buses for a total of 2 hours and 10 minutes to get to the warehouse. STFU dudes. That place is pretty much like NYC in the eighties - except without all the gazillioniares to pay taxes to allow the city to make real changes.

Giovanni- By 'the city' you mean parts of Manhattan. I was in Queens all day yesterday. No copters, nobody on edge. Guess they missed the memo. Been to LA many times. The ghetto birds only fly in areas youd never live. Why you always bring up LA is a mystery. Do you love LA? You like those public homphobes who are in the closet. LOL. On edge? Maybe you need meds. LA and NYC are very different places.

If captured, would the perpetrators of those crimes be indicted, tried and convicted? If the answer is "no", you may have a point. Otherwise, quit trying to make false equivalencies.

@3:35 pm The City is Manhattan, always has been, always will be, which is why we have the bridges and tunnels for the B&T crowd to enjoy city life before they have to return to their nice quiet LA style helicopter-free homes.

So we are pretending that there aren't anti-violence campaigns, organizations and protests all of the time in "black" neighborhoods? Hell, there was a major one in LES after that boy was killed for his coat not too long ago (the Post even had a story about how Jay Z didn't attend. I'm sure you are a subscriber). A poor memory is very convenient when making shallow arguments.

Could you explain what you mean by police departments dealing with transgressors "SEVERELY"?

@5:00 PM; There is no need to pretend that there are no protests or any violence campaigns "all of the time" when the example you reference happened over two years ago ( January 2013) . A two year old example makes for a " shallow argument".

In my previous comment , it should read, "anti- violence capaigns" not violence....