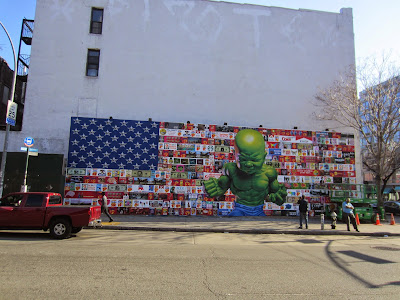 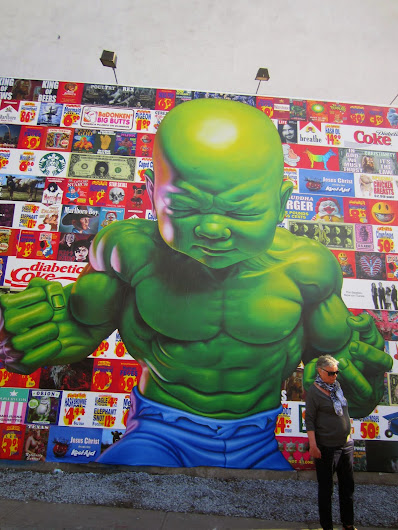 And here is some of the official news release on the mural via wall curators Goldman Properties:

Jessica Goldman Srebnick, CEO of Goldman Properties, creators of the international outdoor street art museum, the Wynwood Walls, in Miami, has announced that Ron English will be the next artist whose work will adorn their famed Houston Bowery Wall in lower Manhattan. English joins an elite group of artists Goldman Properties has personally curated to paint one of the most sought after mural walls in the United States.

Describing his work as “Popaganda” – a mash-up of high and low cultural touchstones, from superhero mythology to totems of art history and his own original characters, English has enjoyed a successful career as a street artist as well as a fine artist. He will begin working on the Wall on Friday April 17 and the mural, entitled All American Temper Tot, is expected to be completed by Wednesday, April 22. 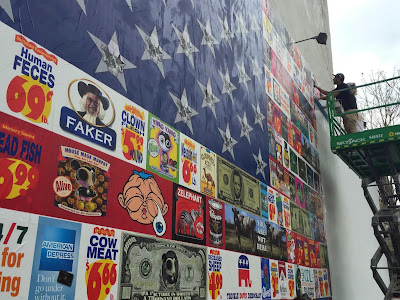 Previously on EV Grieve:
The Houston/Bowery Mural Wall has been boarded up

The mural wall will remain on the Bowery and East Houston

Peeling off the layers through the years of the Houston/Bowery Mural Wall
Posted by Grieve at 10:38 AM

"What’s all this FUSS I keep hearing… about endangered feces?"

He's mad because someone served him an acai bowl

It actually makes you think a little bit, which is better than most art. Reminds me of the Mad magazines of my childhood.

Unfortunately this is a dream for R.E. Developers.

Ooh, how edgy. Not. Overrated. NEXT!