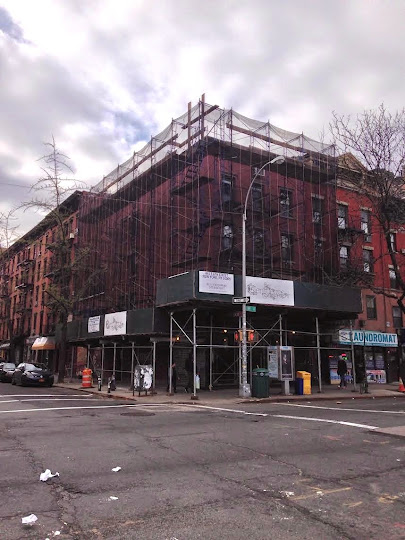 Structural repairs are ongoing at 95 Avenue A at East Sixth Street.

During the rehab, Gin Palace, one of the three bars (along with Cienfuegos and Amor y Amargo) that make up the retail component of the building, closed for service last November.

Now, as the Times reports, the bar is getting an overhaul too.

Ravi Derossi, an owner, said construction on the building so completely gutted the interior of the bar that he decided to start over with a “tiki-influenced” bar called Mother of Pearl.

Mr. Derossi and [co-beverage director Thomas] Chadwick said they didn’t want Mother of Pearl to be pigeonholed as a tiki bar. “Postmodern Polynesian,” they called it.

Per Derossi, "The idea for this was like sitting in a fancy hotel in Hawaii or somewhere."

Mother of Pearl is expected to open in late May or early June.

Email ThisBlogThis!Share to TwitterShare to FacebookShare to Pinterest
Labels: 95 Avenue A, Gin Palace

Dear bar owners, please keep it real, stop with "themes" which only look ridiculous when new and pathetic within a few short months. Here's a tip, authentic and contextual will make your bar look like it was designed for adult client which I hope is who you intend on serving. Kitsch is good when a place has been around 20 years and cannot be made by adding water into powder like shitty macaroni and cheese.

But Anon. 7:50, isn't it more than obvious what audience these guys are going for? My guess is that the broho's will flock to a place like this to get their WOOOOOO! on, and the adults will stay away like the place is infected with the Black Death.

Oh chill. Derossi has opened a bunch of great bars in the EV, he knows what he is doing.

I could do without the high concept. Derossi's places, with the exception of Proletariat (which came after the bakery bait-and-switch), all cater to the moneyed-privileged demographic. These are not places for neighbors/locals.

Death & Co. is a nice joint for tourists, the moneyed-privileged crowd in town from Los Angeles, and anyone else willing to stand in line until someone calls your name and crosses you off the wait list on the clipboard

I am excited for the change. Gin Palace was a bit dark and musty for a casual midweek drink or catch-up. And a nightmare on the weekends, packed to the gills and pushing a small room club vibe.

This sounds horrendous and douchey. Just bow out.

As a 20+ year resident of the EV, I would dismiss this out of hand but being a fan of mid-century Polynesian, I'm curious to see how this unfolds. Hopefully it'll be great, but I've been disappointed with theses kinds of things before.

try and pass opening a "bar" by community board 3. you have to have all the bells and whistles up for those tasteless wannabee upper west sider jerks

Oh, I don't mind a little nose-up-in-the-air vibe. There're plenty of places in the EV to be real and divey. It's about options, the more the better. If I feel like wearing yesterday's T shirt and drinking beer in a stinky dive I can throw a rock. The upscale places may be making inroads, but there will always be dives. That's what makes them special.

I'm hoping they bring the glass windows back and ditch the black-slab look that haunts the corner. Their speak-easy lite shtick is overdone.

The old East Village is now rapidly shrinking as the expanding neighborhoods of YoBro and DumbHo rapidly take it's place. Time to redraw that map!

They should call the bar Postmortem and make it autopsy themed. Put everyone in a drawer or a bag and STFU.