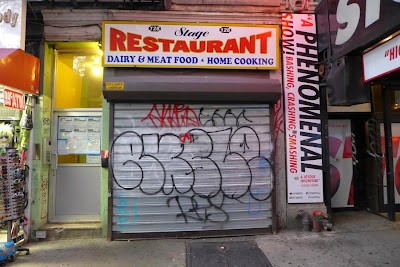 Landlord Icon Realty has accused the Stage of illegally siphoning gas, which was the basis for a recent eviction notice in the aftermath of the deadly blast across from the diner on Second Avenue.

Roman Diakun, the owner of the 35-year-old Stage, has previously denied any wrongdoing.

Now, the Stage is suing Icon to stop the eviction process. The Post has the story:

Diakun "says in his Manhattan Supreme Court suit that Con Ed advised him to hire a plumber to restore gas service four days after the March 26 building explosion.

Diakun says there was no siphoning, claiming the plumber he hired discovered a gas leak in the basement of 128 Second Ave. and then removed extraneous pipes to fix the problem.

As The Wall Street Journal reported on April 20:

Since the explosion, 128 Second Ave. has accrued 87 violations with the Department of Housing Preservation and Development, along with two additional violations and a stop-work order from the Department of Buildings, according to city records. The building has been without heat, hot water, or cooking gas for three weeks.

Icon bought the building in October 2013.

The Stage, 128 Second Ave. between St. Mark's Place and East Seventh Street, has been closed since March 30.

Previously on EV Grieve:
The possibility that the Stage won't reopen on 2nd Avenue

[Updated] The Stage is giving away its bulk food and supplies to charity
Posted by Grieve at 12:49 PM

Email ThisBlogThis!Share to TwitterShare to FacebookShare to Pinterest
Labels: Stage, the Stage

people who can should appear in court with the stage, if he has a court date.
not to do anything other than sit there, perhaps with buttons saying "stage"
something
time to not sit around

It's possible that only the lawyers will show up in court.

Meanwhile, I'd certain contribute to an online donation for the cause.

Good for them! It's time to take slum lords to task. People unite.

Glad to hear they are fighting back and releasing the facts of the situation. Like another poster said, if they are taking donations for legal fees, I am happy to help. Just let us know where to give.

Icon, just fuck off and sell the building for what you bought it for. Just get out of here. All you do is destroy.

Agree re: contribution to legal fees. Glad Roman is fighting back!

Roman always had legal recourse -- I'm glad to see him going on the OFFENSE. Aside from stopping the ICON eviction, he can and should sue for lost income and other damages....