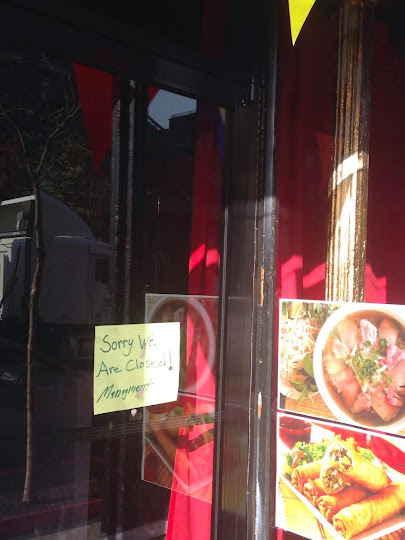 After a promising start, Long Bay, the reasonably priced Vietnamese restaurant that opened March 12 at 503 E. Sixth St. just east of Avenue A, has closed.

Long Bay has been dark all this week. Bill the Libertarian Anarchist spoke with a manager, who said that they might be closed permanently — one of the owners wants to sell his piece to the other … and apparently there's some kind of disagreement.
Posted by Grieve at 4:30 AM

Sad. This place was good. I went in there one night, but was the only one in there. The writing was sadly on the wall.

Crap, I hadn't made it over there yet but it was on my radar to do so soon.

5 weeks, really? Don't people know when they open a new place it takes a while to get traffic, and that they should have the resources to survive for 6+ months?

This is too bad. I imagine the timing of the fire/explosion didn't help them. If it's anything like Nicky's on 2nd street, they may reopen--Nicky's closed and reopened several times, as I recall. What doesn't make sense to me is to spend so much money completely building out a new restaurant and then just give up on it a few weeks later. Doesn't sound like the owners have the best business sense.

Hey you just write it off on your taxes - the residents ate the noise and dirt for months but that doesn't count.