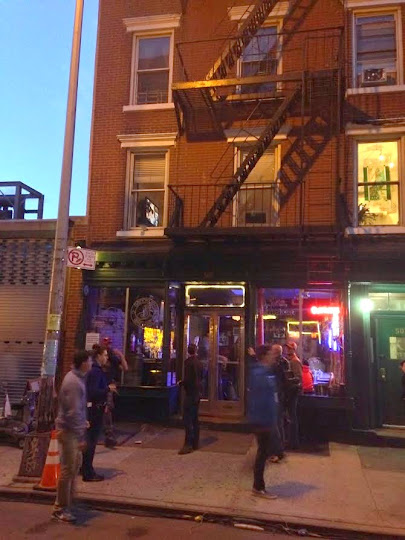 Sophie's, the bar at 507 E. Fifth St. just east of Avenue A, is closed tonight while a film crew preps the exterior for a scene for the Netflix Marvel series "A.K.A. Jessica Jones."

Sophie's co-owner Richard Corton confirmed this evening's closure to us… in the scene being filmed, a bouncer will apparently 86 the show's lead, a former super hero played by Krysten Ritter, who falls or is pushed into some trash. Will have to wait for the series premiere to find out why.
Posted by Grieve at 8:37 PM

It won't be Krysten Ritter he pushes, it'll be her stunt-double.

The table in the corner to the immediate right of the entrance is a good spot to sit and have a pint...wait, what were we talking about again? Our favorite seats in the neighborhood's bars?

True fact- All the cool kids stay at the end of the bars...

People love Daredevil. I wonder if this will be as good.

I hope they let Amos (Sophie's bouncer) bounce her. C'mon let Amos do it!

I watched some of this last night from across the street. It was Krysten Ritter. However, the bouncer doesn't throw or push her. The scene begins with the bouncer telling her to get out and stay out. She's backing up yelling at him and tumbles into this big mound of cushy-looking trash set up for her. It was insanely boring to watch. But I am looking forward to the series!