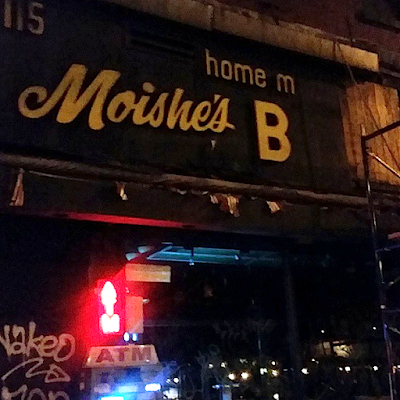 While this retail space has been for lease since last summer, there hasn't been any mention of a closure from the owners of Moishe's. (The only sign in the window states that they are closed on Saturdays and open on Sundays.)

There is a complaint on file with the Department of Buildings dated April 11 (in the DOB's ALL-CAP style):

FROM THE RT. SIDE, YOU CAN SEE THE NEW BUILDING HAS "SHIFTED" & THE WALLS HAVE MANY HOLES. THE BENDED CANOPY IS NOT ATTACHED TO THE WALL & IS COMPLETELY SEPARATED FROM THE WALL, AT LEAST BY 4 INCHES.

The DOB issued an Environmental Control Board (ECB) violation for "failure to maintain front facade." So perhaps this is the first step in renovating the storefront to meet the DOB's standards.

The bakery, which opened in 1978 (or maybe 1972), returned last Sunday after being off for the Passover holiday. Moishe's is one of the many merchants whose business tailed off in the days after the Second Avenue explosion.

In a widely circulated Associated Press photo from March 27, owner Moishe Perlmutter was seen offering the FDNY some of his baked goods...

This man is handing out cookies to firefighters clearing rubble from yesterday's explosion in the East Village (@AP) pic.twitter.com/MpZ0Xuc6TQ 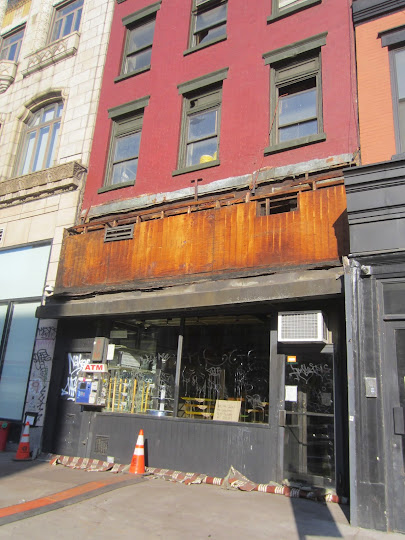 Several readers spoke with Moishe at the shop yesterday... he reported that the sign will return after the facade repair... and that they are not going anywhere.

I hope it's because they're finally fixing up this place. Their pastries are excellent, but I feel like I'm in a squat when I'm inside there.

Love their rye bread, and bagels, and bialys, and marble pound cake, and hamentash.

I'd go with the 1972 opening date because the first time I was there in 1978 no way no how did it seem new. I thought it had been there forever!

If they haven't signed a new lease then why would they be fixing it up? Is it still listed with an agent?

It had to have opened after the Fillmore closed, or we all would have been in there all the time, especially during overnight lines. As it was, Ratners was well worth it... what a joint !

I love Moishe's just as it is and I'll miss seeing that old sign. I hope they reopen soon. Moishe's, what's up!

BC, They might be fixing it up because they were tired of it looking like a dump.

They dont need a lease. They own the building

But why do this in the middle of the night?

Love their marble cake by the pound.

I'm standing with Moishe right now and he says that the sign was taken down for repair due to damage from the tragedy across the street and will be put back as soon as it is repaired.

I was walking by Moishes a few days ago and a couple was standing there making fun of the way their pastries look. The young lady was telling her boyfriend how the cakes and cookies just didn't stand up aesthetically to her sky high standards, which from her looks involve frequent trips to low end chainstores to buy cheap knockoffs imported from China. This chick had no clue about kosher bakery and had clearly never tasted Moishe's amazing rye bread, babkas, or black and white cookies. She is the type who buys what looks good on Instagram, tradition has no place in her materialistic digital lifestyle.

And then I realized it was Taylor Swift. OMG! So I took a selfie with her and now all my friends on Instagram are so jealous that they are actually hanging out at kosher bakeries waiting for their chance to take the perfect selfie. Yay!

all good. moishe is repairing sign it came loose after explosion. will be up in a few days

Moishes used to be the Ratner Bakery. so there's been a bakery at the location for decades. when the Ratner's left for Brooklyn they offered Moishe the shop for very cheap. Moishe was already operating a bakery in a smaller location, and since the businesses were both similar, it was an easy transition.

I am surprised that no one has mentioned that Moishe's is open again (as of Sunday 4/19). It was just a problem with the sign--the buildings department told them that they had to replace the sign because it had become unsafe in part because of the effects of the blast. No problem with the rest of the bakery which is fully back in operation.