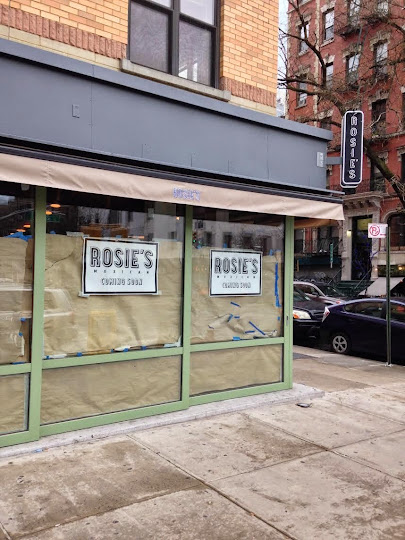 And Women's Wear Daily has a preview, speaking with co-owner Vicki Freeman.

Rosie’s has set out to siphon the vibe of Mexico’s open markets and the myriad flavors from across the country into its menu. “The idea really was to create the feeling of a Mexican market without being literal,” Freeman said ... “We didn’t want to do anything kitschy. There aren’t going to be any piñatas.”

What the restaurant does have is clay pots and good luck charms sourced from Mexico, as well as an open, airy dining room swathed in pastel green, yellow and blue tiles and wooden tables custom-made by Asfour Guzy Architects. The restaurant sits on a well-lit corner of Second Avenue, with floor-to-ceiling windows that can open directly onto the sidewalk.

The emphasis is on authentic regional dishes that incorporate ingredients sourced from small farmers in Mexico. Using this shorter supply chain, Rosie’s is able to get their hands on heirloom corn varieties, which they use to grind and make their own tortillas in-house, and numerous varieties of chiles. They even hope to eventually procure some more obscure items, such as terrestrial snails.

The previous tenant, the low-key, Greek-themed Boukiés, closed in March 2014 after a two-year run.

Previously on EV Grieve:
2nd and 2nd coming up Rosie's
Posted by Grieve at 4:30 AM

I hope it succeeds. Such a good space staying empty.

Happy to have an authentic Mexican neighbor, looking beautiful !