Avenue A L train entrance closer to a reality … some day 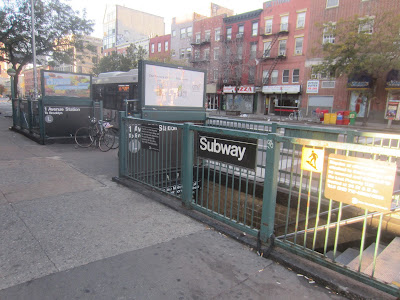 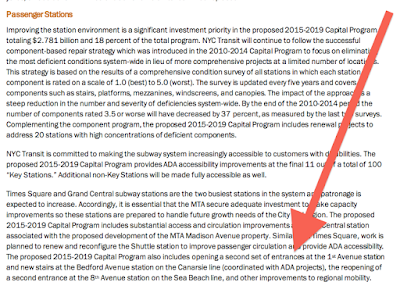 So there's budgeted $$$ for a second set of entrances for the L stop at First Avenue. A news release via the MTA from last December suggested the following scenario:

At the 1 Av station, new fare control areas at Avenue A would double capacity – a 100% increase – up to the street from each platform. The Avenue A entrances would serve 60% of the station’s ridership, thus eliminating a 500-foot walk (from First Avenue to Avenue A) for 31,000 weekday customers entering or exiting the station.

And the L train only promises to get more crowded with the arrival of the 150 residential units in the two new 7-floor buildings on East 14th Street between Avenue A and Avenue B that Extell is developing. (Not to mention the residential building replacing the former Peter Stuyvesant Post Office.)

In February 2014, Holyman asked Extell Development to "contribute toward the construction of a second entrance to the 1st Avenue L train subway station." (You may read his letter to Extell here.) Not sure how that ask went.

Regardless, the money is in the MTA budget to make this new L train entrance/exit dream happen.

The Extell developments are expected to be complete in early 2017. No word on a timeline from the MTA on when any of this L train entrance work might happen. (Given that the 2015-2019 Capital Program finally got the OK so close to 2016…)

Previously on EV Grieve:
A Davey Drill and a dream

Is an Avenue A entrance for the L train in our future?
Posted by Grieve at 4:25 AM

Email ThisBlogThis!Share to TwitterShare to FacebookShare to Pinterest
Labels: MTA, the L train

I never found the extra block west to me such a problem but I sure wouldn't mind being a block closer to home when the weather is bad or running late.

Not that I'm opposed to a new entrance, but is there a technical restriction (aside from funds) that restricts the construction of an L stop around Aves B-C? Is the tunnel too deep underground by then?

What is this telling you, that everyone is taking the L train to flee the EV?

"What is this telling you, that everyone is taking the L train to flee the EV?"

or coming here for Santa Con : (

A stop can't be built any further east than in Manhattan because after the trains leave the 1st Ave stop, they start descending down to reach the tunnel that is under the bed of the East River. It wouldn't be possible to level it out to build a station.

@10:42 AM, I think the tunnel turns at that point so a B-C entrance might not be aligned with 14th Street?

Add the Steiner project on A between 11 & 12th as another one that will contribute a slew of new commuters to the 14th Street corridor. The 14A & D buses are already rush hour disasters and all the residential additions in the northern EV will just make it all worse. While the staircase at Ave A will be a help, the MTA needs to increase frequency of the 14th Street buses during rush and restore the M9 bus that used to run between Union Sq and Lower Manhattan via Ave B and Chinatown. It's now on Ave C and still serves Chinatown but no longer goes to Union Sq. That needs to change.

Always felt the 2nd Avenue Subway line should've been planned to turn east at 14th and then run down Avenue A. 2nd Ave south has the F train and the Astor station isn't too far away. The people who live in the letters have nothing. an Ave A line that continued south past Houston down the LES those underserved by MTA.

"the MTA needs to increase frequency of the 14th Street buses during rush and restore the M9 bus that used to run between Union Sq and Lower Manhattan via Ave B and Chinatown."

Thanks for mentioning this; I knew I wasn't the only one who missed the M9 running on Avenue B. Moving it to Avenue C was a quick-and-dirty move by the MTA, who could well afford to move it back now.

It still [usually] runs to South Ferry, but by combining the M9 and M21 lines to run the M9 up Avenue C to 23rd street, they reduced the M21 to just a stub across Houston street.

Besides, the M9 was originally a Red and Tan bus that ran all night. Two different guys who lived here in the 60s have told me that. They called it the "Avenue B bus." It's always been the Avenue B bus.

I'd be glad to sign a petition, attend a hearing, whatever it takes to get it back.

I wouldn't get too excited about the Avenue A L stop. Even if it does happen, it is going to take years and years to construct given how city construction projects work.

When the L train isn't running there is a difference in this neighborhood so profound you can almost feel it.

it's a long platform, which already runs right under Avenue A, with only one exit. the end is already right under Avenue A and has been forever. Good on ya for finally getting this approved. Im certain stuytown residents will be happy and, like it or not, there's a ton of development going on right on E14th (including at the old R&S spot at Ave. C) that will warrant the Ave. A entrance. now, if they'd run the L more frequently at rush hour that'd be another thing.

The construction is supposed to be scheduled concurrently with Sandy repair work: http://secondavenuesagas.com/2014/12/17/on-the-l-train-and-taking-advantage-of-a-bad-sandy-situation/

And the M9 doesn't run to South Ferry anymore. They cut it back to City Hall, and then extended it further west to Battery Park City (along Murray/Warren Street).