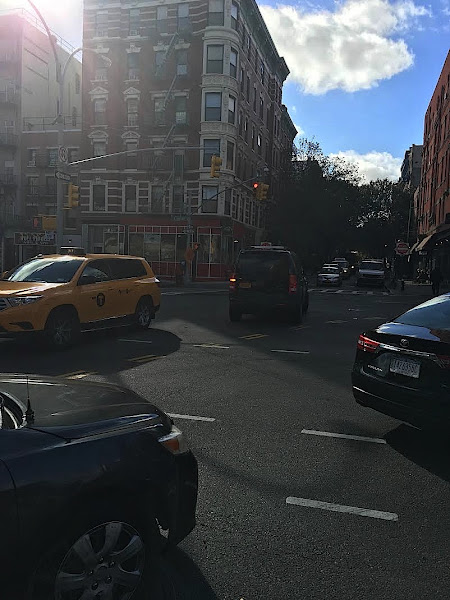 Per the reader: "The SUV was badly damaged. The hood was bent into a V. I’m surprised the pedestrian survived."

It is the same intersection where East Village resident Meipui Chow Leon, 73, was struck and killed on Aug. 23, 2013, by a Whole Foods van while walking north in the crosswalk from Clinton Street to Avenue B. 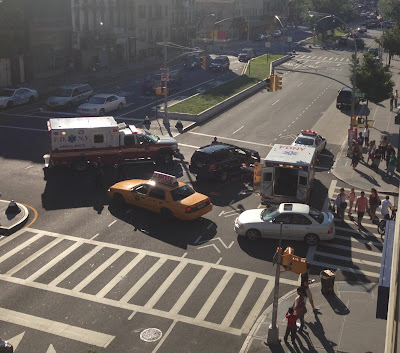 The EVG reader lives nearby and has observed how dangerous the intersection can be. The reader offers an assessment and a partial solution. It starts with traffic exiting the Williamsburg Bridge and turning north on Clinton Street.

Drivers coming off the bridge are always trying to run that light to make a right on Houston, and get onto the FDR. Clinton Street backs up a half mile onto the bridge during rush hour. Only about 4-5 cars can make it through that light before it changes. There is a car accident or pedestrian strike at least once every three months at this intersection. If we had protected bike lanes, a curb extension or if they would reverse [the traffic flow on] Clinton, that intersection would be so much safer. Seems like all the pedestrian strikes happen going eastbound. Westbound is more fender benders. Drivers are still doing highway speeds coming off the FDR.

More accidents on East Houston Street
Posted by Grieve at 4:30 AM

Houston Street is dangerous from the FDR exit to 6th Avenue. I won't cross at any avenue intersection, and if I'm near the F train, I use the underground passage. Even with these precautions, there are times I've almost been hit.

Houston St. is a deathtrap, and I have seen way too many bad accidents at this intersection. Can we just put up crossing gates like they have at railroad crossings? Cars need to be physically prevented from blowing through lights, otherwise they will always try to do so. Another solution is pedestrian bridges like the ones on the FDR, or rappelling wires to fly people above the traffic. As long as people are forced to cross in front of cars, there will be accidents, and pedestrians will be the collateral damage.

I agree that all of Houston from FDR on is problematic. Clinton/B is real bad. I don't think the city will reverse the traffic pattern now on Clinton tho. Too much $$$ with the new condos going in b/t Stanton and Rivington. Unless those people with the $$$ complain, nothing will happen unfortunately

Traffic has gotten really bad over the past 6 months. I blame it on a couple 'trends' 1. loss of many parking spaces due to idiot citibike 2. loss of parking spaces due to idiot uber drivers waiting to steal a fare from the cabbies 3. idiot uber drivers driving around in circles waiting for fares. A red light is now a signal to make a turn, because it really is just about impossible to turn with the fucking herds that have been brought into the neighborhood. Nothing new, Caleb Carr talks about how entertainment circa 1910 was having drinks in Unioon Square and betting on if people would get hit by a trolley or horse.

It would be good if the traffic on Clinton St. was once again reversed, it went North to South when the Williamsburg Bridge was under construction many years ago. To have very large, polluting commercial trucks and speeding cars come off of the bridge directly onto a small residential street. is extremely dangerous and a health hazard, not to mention the large trucks that have uprooted and killed many 40 year old trees (that have since been replaced by smaller ones) along Clinton St.
At the very least, commercial trucks coming off of the Williamsburg Bridge directed onto Essex St., a large two way street, would considerably improve the quality of life and safety on Clinton Street between Delancey and Houston St.

I cross with little kids every day. Ave B is the worst. Ave C is better. Ave D is pretty bad. Pedestrians take note. Real traffic cops would help as I've watched drivers flat out blow off the school crossing guards on Ave D.

I don't think it's any worse than in times past but the overall cluelessness of pedestrians has increased somewhat. Texting and newcomers from suburbia etc ... The entitled armor coated arrogance of some of the professional drivers is the same. They blast through their legal left turn into a crosswalk because "you die, I don't". It's not at all illegal to run someone down with a car. It's somewhat of a perfect crime. I hit him. I wasn't drunk. No case opened. Cars make people stupid. See: United States of America.

Citibike has been around for over 2 years now Grump.

Since Houston St. is one-way west of 6th Avenue, things are better on the west side. But the further east one goes, the worse it gets. Having all that empty eastward road starting at 6th Avenue is like giving drivers a running head start. They get up a head of steam, but by the time they get to Broadway, they are a danger to walkers from there to the east river.

I believe the right to travel autonomously and without State permission is one of our greatest liberties. Parking is used as ultimate social control. You can drive where you like, but try to park. and with all the parking taken up by unregulated livery, people have to drive in circles and it gets very very frustrating.

All you can do as a pedestrian is never to cross until you see that cars have actually stopped for that red light---as a red light and ok to cross sign by themselves means absolutely nothing now.

Also-- bike riders tend to sail on through red lights as well and have the nerve to curse out a pedestrian crossing...

Citibike has nothing to do with the way people drive on Houston Street. Uber, maybe, but not Citibike.

Mr Grump, Every aspect of traveling is regulated by the state: the streets, the highways, air traffic, subsidies that make fuel cheap, policies that favor highways over mass transit, or vice-versa, everything. Parking is really the least of it.

That intersection is a death trap and many drivers show their worst there. I've many times nearly been hit, on foot or on bicycle, crossing Houston there, because even when one driver rightly yields to pedestrians and cyclists going straight, more often than not, an asshole who just cannot wait his turn simply goes around the driver who's being safe and obeying the law, and ends up (nearly) slamming into pedestrians and cyclists. I hate that intersection and the behavior of many drivers there with a passion.

I hope some of the commenters (and Grieve himself) can give some thought to what we say when we state "A car hit...", "A car was speeding..." These vehicles are being driven by people who should be held accountable for their conduct when they break the law. The same way we don't say "A gun shot him", we shouldn't say "A car hit him." No car did that; the car's driver did.

All vehicles are out of control. I used to feel safe crossing when I had the light. Now I'm trepadatious because cars are very aggressive not paying attention to pedestrian right of way. Also on Aveue A and Houston one should cross on the East side going either South or North. If you try to cross on the West side, you have the light and so do the cars turning left on to Houston going West. Bike lanes, bikers don't follow the rules. They don't follow the arrows or lights and cut across the avenues on an angle while your crossing. The skateboarders and scooters are terrible too and people with shopping carts and people who collect cans use the bike lanes as a promenade. It's nuts. Need to be cautious.

I got hit by a car at Clinton and Stanton. All the drivers fly up clinton and debate the right turn until the last second, this guy was looking right, with his blinker on, but drove straight, straight into me. I would like to see the bridge traffic forced to go up to Essex. I think all the new development on clinton and nearby will help this happen, as rich people dont want their kids run over by a minivan from williamsburg, or a delivery truck etc. And they dont want the pollution, noise and air. Clinton and nearby is the apex of gentrification right now in my opinion, it has been staggering to watch in my short time (10 yrs) here.

Houston Street is dangerous from the FDR exit to 6th Avenue. I won't cross at any avenue intersection, and if I'm near the F train, I use the underground passage. Even with these precautions, there are times I've almost been hit.

Fortunately there are subway stops at different avenues where you can do this, including the 6th avenue West 4th A station—you don't even need to pay a fare.

Cars need to be physically prevented from blowing through lights, otherwise they will always try to do so.

Sad but true. I basically think it wouldn't hurt if New York were to become a totally-pedestrian city; it might keep people away—and then it's their loss!

It's also difficult if one drives south and tries to make a left onto Houston st. I'm not sure turning the traffic back to the bridge is a good idea.