Report: 311 calls about homeless people are on the rise in the East Village/Lower East Side 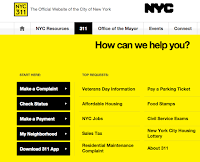 Catching up to this story from DNAinfo on Monday… in which reporter Lisha Arino went through public records to find that 311 calls "about the presence of homeless people, homeless encampments and panhandling have spiked in the past year."

The increase in calls continues its upwards trend. Records show that there were only 83 calls logged in 2010.

However, as DNAinfo points out, the "numbers don’t necessarily mean the neighborhoods’ street homeless population has increased." The mayor's office says that "the number of complaints was proportional to the increase of citizens using the 311 app."

In addition, Manhattan Outreach Consortium director Cesar Vanegas said that he has not seen a significant increase in street homelessness recently.

Read the full article here.
Posted by Grieve at 4:30 AM

Email ThisBlogThis!Share to TwitterShare to FacebookShare to Pinterest
Labels: 311

I'm troubled by the use of the word "complaint" for these calls to 311 about homeless people -- calling 311 and asking for the homeless outreach unit is the non-911 way to bring aid to people who appear in distress or or otherwise in need of help. Maybe some calls to 311 are "complaints" but I'd bet others are an effort to be humane and not just ignore people in distress.

This service is useful for reporting bar noise.

My submission of noise complaints has skyrocketed in the past 5 years due to the amount of douche frats boys having parties in the outdoor space next to me. Doubt that makes the headlines.

Of course, "The increase in calls continues its upwards (sic) trend." As will an increase.

If you use the 311 app on either iPhone or Android, it saves a list of the date, time and type of your complaints to your phone. So if you need evidence of an ongoing issue like chronic noise, use the app. You can take the list to a Community Board meeting, for example, to demonstrate how much of a problem it is and how much and when you've complained.

I have noticed a new encampment at East River Park entrance off Ave C across from Stuytown, under the FDR.

Funny. I see the jump in complaints as proportionate to the amount of "upscale hipsters" who have moved into their overpriced rentals or condos and don't want to see homeless people on the front step. Guess they should have thought about that before moving into the neighborhood. Homeless have been in the neighborhood for more than a century and will remain....until NYC decides to shutter the 3rd Street mens shelter and sell the land to some developer to put up another overpriced condo or hotel. Imagine that? The Bowery Hotel has taken the prize for being the new hangout of the "I need to be seen in my Italian clothing eating outside next the Bowery Mens Shelter to prove I am cool". Bowery Hotel is sandwiched between the huge mens shelter on 3rd street and the Bowery Rehabilitation Center on Bowery.
Instead of griping about the homeless....feed them.

Hey, if I were homeless I'd complain too. Unless I was so beaten down that I gave up. I think we should all start calling 311 and complaining that so many of NYC's citizens are homeless.

I'm neither upscale or a hipster and I don't appreciate the local drunk passed out on in front of my door blocking my egress.

the first commenter is correct, many of these 311 calls are to have homeless outreach offer services to the homeless, not to complain. There are many drunk people in the area, but there is no reason to associate them with homeless. They may or may not be homeless. It appears to me that many of the drunk and vomiting people I see are mostly those with homes that come here to drink.

"the local drunk passed out on in front of my door" -- of course, that's what keeps your rent from skyrocketing more than it already is and you from looking for a new place in Jersey. I hate to say it, but I encourage folks to sleep on my sidewalk for fear that should the homeless get cleared out, I'll be next. Pick your poison.

Yuppie? Who says yuppie these days?

This article can help many homeless!but you are the reason that they can get the help!check out my article https://kovla.com/blog/how-i-fell-in-love-with-a-homeless-man/ about a woman who fell in love with a homeless man!true love is the best thing that can happen to anyone!