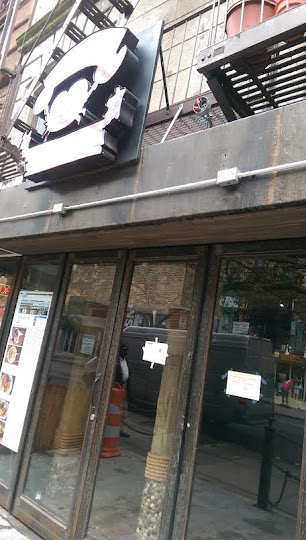 Back in early October, the rather unfortunately named Red & Gold Boil (sounds like a topic for a WebMD search) closed after 13 months in business at 30 St. Mark's Place between Second Avenue and Third Avenue.

The sign on the door from management made it seem as if the place may reopen with a new concept. (We look forward to serving you again, etc...)

The notice of eviction that recently arrived has now been joined by a note from the Marshal, announcing that the landlord has legal possession of the space... 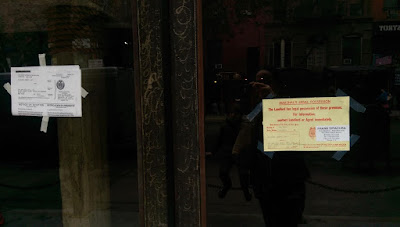 The restaurant opened in August 2014 as the Red & Gold Crab Shack... somewhere along the line the boil replace the crab shack.

Previously on EV Grieve:
Breaking: Japadog is closing for good after tonight on St. Mark's Place

Email ThisBlogThis!Share to TwitterShare to FacebookShare to Pinterest
Labels: The Marshal, The Red and Gold Boil

I'm so sad a small local business has closed, instead of yet another chain store.

And I was so looking forward to all night bobbing sessions at The Happy Clam.

Knowing this neighborhood, the new concept will be turning seafood into alcohol.

So sad to lose this place (despite the unappetizing name). They did a very generously sized steamed lobster for $18! Not just a similarly priced lobster roll as Luke's but a whole tail and claws lobster of about a pound and a half. I will really miss this, as whole steamed lobster is hard to find in the EV.