News of a possible Mike Bloomberg presidential campaign has prompted the return of the parody Twitter account @ElBloombito ... 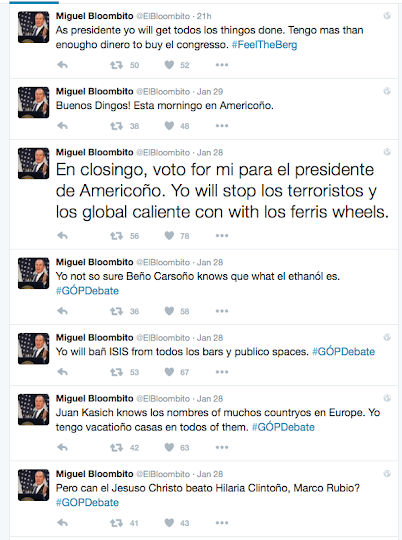 Inwood resident Rachel Figueroa is behind the account that pokes fun of the former mayor's uninspired attempts to speak Spanish ... @ElBloombito launched during Hurricane Irene in 2011.

Re/code published an interview with Figueroa on Tuesday. You can read that here.

Anyway, this may be my favorite from the barrage of recent tweets...

One of the best parody Twitter accounts. After Officer Tubbs and the NYPD Tweet Tower of course.

But seriously, he and Sadik-Khan will tame the Wild West. Between Bernie and Bloomie we now have a choice!

This is the ONLY good thing that has come from his announcement. ME GUSTA GRANDE SODIE POPS.