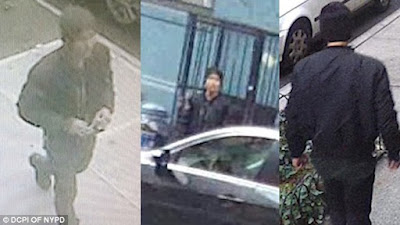 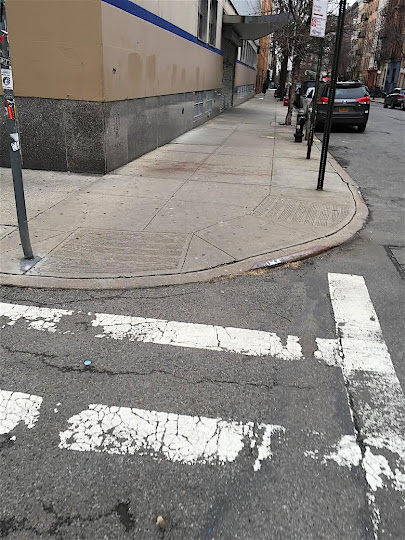 The NYPD said that the suspect is an Asian male between 20-30 years old, 5-3 and 150 pounds. He was said to be wearing a dark-colored coat and a dark-colored skull cap. He did not take anything from the victim.

Around 4:30 p.m. on Saturday, Anthony Christopher-Smith, a social worker from Newark, N.J., was walking east on Sixth Street to meet a friend for a meal when someone came up from behind him, shoved him down and cursed. Per the Post: "The attacker cut his face and back with a knife while screaming, 'Fuck you! Fuck you!'"

According to published reports, Smith underwent eight hours of surgery, and needed nearly 150 stitches for the wound from his right ear to his lips. He has partial paralysis on the right side of his face because several nerves were severed. Doctors told reporters that Smith should make a full recovery and he'll be able to smile again in about six to nine months after physical therapy.

He was released from Bellevue last night. Smith said this about the suspect to NBC 4:

"I hope somebody gets him. He needs to be either in the psych ward or at Rikers, or somewhere, but you know, there's someone who's clearly deranged on the streets and I hope they get him."

CBS 2 has more with Smith here.

There's now a reward for information in this case. Details here.

The NYPD also released part of a surveillance video...

The police have made an arrest in the case.

Previously on EV Grieve:
[Updated] Man's face cut in random slashing on East 6th Street
Posted by Grieve at 6:44 AM

Speechless on the brutality of this act and what the victim has to go through. Wishes of strength for him.

What a terrifying thing to have happen. I hope Mr. Smith will make a full recovery, and of course that the NYPD will catch whoever did this.

Slashing a random person's face is an initiation ritual of the Bloods gang. It's called doing a "buck fifty" - giving someone 150 stitches in the face. This is the second time in about a month this happened. Yes the bloods do accept Asians. They are in the Ave D houses - wonder if this guy was doing a Buck Fifty?

This is terrifying - and I'm not sure how being alert would stop this from happening.

I think I may have seen this guy around before. At least twice I've been followed by a guy from about a half a block distance on and around East 6th Street between Bowery and 1st Aves. One time I was taking a stroll around the block and had to go stand in front of McSorley's so I could be near a small group of people, and run inside if necessary. I've lived here 9 years and have rarely been so freaked out by one guy, especially someone so much smaller than me.

I don't know if it is the same guy, but it was a sketchy dude on the same block. I tell you guys this so you can be aware. Use McSorley's as a safe place if you need to (rarely have those words been spoken).

The guy I saw was at the low end of age and weight, and by the blurry photos could possibly be the same guy. Asian, ~23 years old (or looked young), 5'3", ~140 lbs. He gave me weird looks as I passed him from across the street, then changes directions and followed me and stared at me each time I looked back. I last saw him in early October, I believe. 6th and 7th Streets, between Bowery and 1st. He might live elsewhere and that just happens to be where I frequent, I don't know. I might call crime stoppers but I don't know how much help this is. I promised myself the next time I saw him I was going to yell at him, but now I'm a little freaked out.

If you think you've seen him around you should let the 9th Precinct know. Any information would probably be helpful.

To E 6th St Resident: It is great that you called the police. The information you share could be helpful. Maybe they can look back at surveillance footage from that time period and get a better look at him. I hope he is caught soon so no one else is hurt.

Thank you SO much for posting this!