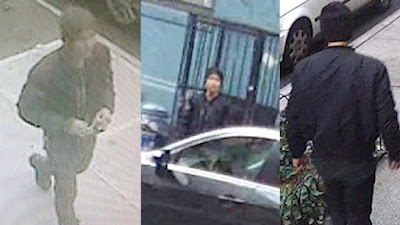 The suspect that police believe randomly slashed a passerby on Saturday afternoon has been taken into custody, according to published reports.

Francis Salud, 28, who is originally from Queens, was arrested at an apartment on East Fourth Street and Second Avenue earlier this morning.

Around 4:30 p.m. on Saturday, Anthony Christopher-Smith, a social worker from Newark, N.J., was walking on Sixth Street east of Cooper Square to meet a friend when someone came up from behind him, shoved him down and cursed. His face and back were slashed in the process. As previously reported, Smith underwent eight hours of surgery, and needed nearly 150 stitches for the wound from his right ear to his lips. He has partial paralysis on the right side of his face because several nerves were severed.

The Post reports that Salud was out on bail for another slashing incident last fall.

Salud was previously arrested and charged for a slashing that happened October 18 on First Avenue. It involved a dispute in a backyard garden with another man over a cigarette. The victim in that case is 30 years old and needed 73 stitches on the left side of his body.

The NYPD is determining the charges with prosecutors. The Post notes that Salud "is believed to have a psychological history."

Suspect Held In East Village Slashing, Had Been Charged In Similar Incident https://t.co/T4eyKxUqFY

Back in October, DNAinfo covered the other slashing that Salud was involved in... the fight occurred in a garden behind Bellevue.

Police arrested Salud the next day, and he was charged with first degree assault, according to the complaint.

Salud was released after paying $30,000 bond, and is due back in court on Feb. 2, according to court records. A temporary order of protection was issued against Salud for the victim, the records show.

Violent felons should not be allowed out on bail. Period.
Only in NY.

Good. I recognize him from the mugshot. I have seen this guy a few times. He lives on 4th St and 2nd Ave. He's lucky his victims didn't die. But the rest of us are unlucky since he could be back on the streets again if the criminal justice system continues to let the lunatics walk free.

Why is the "justice" system in the PR of NY so insane? I've read about violent criminals being arrested for the 35th time here. This wouldn't happen in a civilized place, such as Texas.

Thank you to the men and women of the NYPD for catching this scumbag.

Thanks to the NYPD, and no thanks to the judge(s) who provide the legal route to let him (and his fellow felons) roam the streets when they should be in jail.

Yeah in my case the corrupt NYPD and one of your criminal court justices puts me in jail for defending myself from an attack in the street and in this case they put the ass back out on the street.

This is nothing more than a display of the ultimate corruption within our system. FACT is the system is not working to protect us "The People" it is actually set up to bring us the majority harm such that a few individuals may benefit.

See if we begin to arrest some judges and put them behind bars than maybe just maybe some individuals will not end up going to jail and serving time for crimes that they have not committed.

It's really not enough to give monetary awards to those who've been incarcerated wrongly. It's truly time to get the judges, prosecutors and police behind bars for all the felonious and murderous crimes they commit collectively.

Once arrested for the first incident, why was this lunatic allowed outside to attack another person???
He should be in a cage.

Could someone fill me in on how these people can afford to exist in New York City? How would he have any money for bail?

This jerk lives on 4th St. and 2nd Ave. What's the address? Why didn't anyone there notice this guy and notify the cops?
I was also taken into custody for defending myself from an attacker armed with brass knuckles in 2006. I punched the jerk out in the Starbucks formerly at Astor Place, then made the mistake of waiting around for the NYPD to show. They threw the attacker into one cop car and me into another, with my hands shackled behind my back. I spent an hour in a jail cell on Ave. C, them said to the cops that I should be to Beth Israel for a tetanus shot. They put me into an ambulance even though I could have taken a cab, and later got a bill for $520.
What a ripoff.
I had to go to court, so I hired a lawyer, who came there with me--cost another $2500. The tetanus shot was $150.
Moral of the story--if you slug a mugger, don't wait for the cops.

I can't believe he was out on bail after slashing someone else in the face! That is insane. How could he be released? Does that not meet the definition of a violent crime?

I think everyone is focused on this one example of a judge not understanding the potential harm this man is capable and not the entire system worthy of the junkyard. I would suspect that the courts are overwhelmed in this city and cases cannot be processed in a reasonable time so people like this get pushed back onto the streets.

It is not a perfect system and when it fails it can be disastrous, ask this man's victims.

This is the People's Republic of NYC. Kill a pedestrian while driving, slash someone in the face, or otherwise maim someone, and here's your get out of jail card. Thanks for paying for it, Ms./Mr. Taxpayer. Suckas....

The US justice system is way too lenient. We need to be much harsher, such as very safe countries Japan, Norway and New Zealand.

Are you saying that sending even more people to prison will be beneficial for mr. and mrs. taxpayer? I'm always confused by the posters here.

Yes, the slasher should be in prison.

Yet another slashing this morning in the 6 train at Bleecker St. This needs to stop. via Ny Daily News:

A 71-year-old woman was slashed in the face with a razor by a man seated across from her on a downtown 6 train near the Bleecker St. subway station Monday morning, authorities said.

The attack — which appears to have been unprovoked — occurred after 7 a.m., before the train reached the Bleecker St. station, cops said. The woman, identified as Carmen Rivera, was taken to Bellevue Hospital with a 4-inch slash across her left cheek.

Police did not yet have anyone in custody. The suspect is described as a light-skinned black or Hispanic man, 18 to 20 years old, wearing a red sweater and black sneakers.

The suspect fled on a northbound D train, according to police. Authorities are now reviewing surveillance footage from the mezzanine.