The new owner of Nonna's Pizza on Avenue A says hello 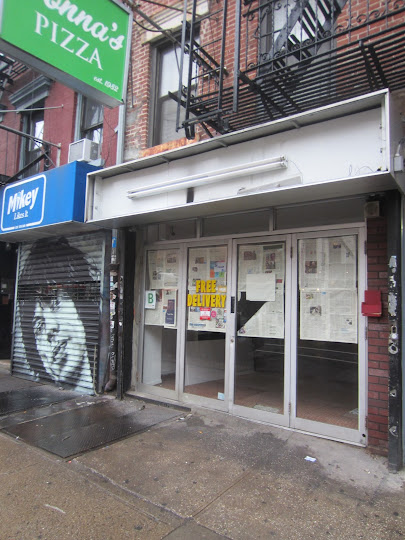 As we noted on Jan. 7, the current incarnation of Nonna's Pizza has closed on Avenue A between East 12th Street and East 13th Street.

The new owner left a comment on that post yesterday... and we're sharing what he had to say here:

My name is Jordan Baker ... and I purchased the pizzeria from Astro (previous owner) on New Year’s Day. I’ve heard some gossip about the place (mostly untrue) so I wanted to introduce myself.

I’ve lived and worked in the neighborhood for 3 years, first on 10th street, now on Avenue A and 11th. I love Avenue A and the small businesses that comprise it (with the exception of two franchises that have recently opened that are eye-sores) and I want to keep it small-business friendly as long as possible! I had a good relationship with the previous owner, as a customer and a friend, and I’m taking the spot over, partially as a favor to him (for personal reasons), and partially because opening a pizzeria has been a dream of mine as long as I can remember.

I plan to have a soft-opening sometime next week, and I’ll be giving out free pizza and soliciting feedback from anyone who lives in the area. We’re renovating right now, but I’m usually there all day every day, so pop in and say hi! If you have any questions about the restaurant (I’ve heard a lot of gossip — mostly untrue) don’t hesitate to come by and introduce yourself.

Welcome, Jordan; while I am sorry Astro folded his tents I will be more than happy to check out your pizza - especially if (hint hint) you offer Grandmother pizza the way he did. (But I'll check it out even if you don't!) Best of luck to you in this new endeavour -

Well everybody it doesn't get more local than this, looking forward to an occasional slice now than then. Welcome Jordan.

Good luck Jordan. I've lived on Ave A for 12 years a block or so away from your space, which has been 3 or 4 different pizza places, none of which were really any good. You're in for an uphill battle. Make some great stuff and the customers will come! 11B and Gruppo do well, there is no reason you can't, too.

I really like EV Pizza and Stromboli in terms of local slices but the fact you posted on here made me want to try your establishment when it opens. I'm on C so a closer (yes I'm that lazy) good slice would be great!

What gossip is he referring to?

Welcome to the block. I visited the pizza shop when the previous owner ran it, but it was during the summer, and there was no air conditioning, and it was unbearable in there. I felt bad for me and moreso for the guys who worked there, and I stopped going in. So get ac! Not now but in the spring. No one wants to eat in a restaurant that is 10,000 degrees. If you make good pizza, this place could do well. That was another problem with the previous owner and the ones before. The pizza wasn't good.

The other eyesore is probably all the Connecticut looking douchebages Instagramming outside of Tompkins Square Bagels.
Anyway, good luck bud. I'll swing by.
Get some real New York Italian cats working in there, that's that shit.

I would love to have a good pizza place right here. It is a prime location but everyone else who had the lease didn't know how to make pizza or run a business. If this guy is smart, he will do well. I can't wait to try the place.

If he's able to offer at least one vegan variety, I'm there; I know I'm not the only person who wants vegan, seeing as Two Boots had a vegan pizza party the last evening of November (World Vegan Month) and they were mobbed!

If he can't make a pie without using dairy mozzarella but he makes a good crust, I can get a small red pie once in a while. So I'll stop by sometime this week to check it out.

I live around the corner, so I used to frequent Fat Sal's...thought it was a decent slice joint. When the Nonna switch-over occurred, I felt like the quality went down and the post-renovation vibe was weird -- it felt really empty in an uncomfortable way. Anyway, best of luck, and I'd love to have a great slice available close by.

Yesterday I had a slice at Baker's Pizza: a white slice with caramelized onions and a little sausage -- very unique. It was delicious. Bravo to the baker!