On Broadway, that Teavana (RIP Silver Spurs) will become a Starbucks 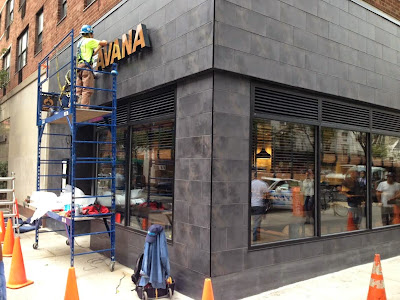 [Photo from October 2014 via @elivalley]

Starbucks is reportedly doing away with its Teavana tea bar concept, and is closing its three Manhattan locations, including the one on Broadway at East Ninth Street.

And what will replace Teavana? Per BuzzFeed, who first reported on this:

The company announced on Friday that it will convert the three Teavana tea bar locations in New York into Starbucks stores by the end of April.

For 34 years, the corner space here was home to Silver Spurs, the diner that closed in December 2013.

As for Teavana, Starbucks bought the Atlanta-based company for $620 million in December 2012. While the Teavana tea bars are closing, Starbucks will continue on with the nearly 350 Teavana retail outlets across the country.

Starbucks-owned Teavana coming to the former Silver Spurs space on Broadway
Posted by Grieve at 4:20 AM

This was an exercise in Futilitea.

Tea is apparently not as trendy or addictive as coffee. Starbucks is a a point in its corporate life when it needs to reinvent or expand into different markets before it finally starts shrinking. They have introduced sugary coffee drinks for people that really don't like coffee which tells me they hit the ceiling.

So we are back to having 2 Starbucks basically a block away from each other again. Smart strategy!

So essentially we lost a gem like Silver Spurs for yet another useless Starbucks. Jaw-dropping.

...yet no scrambled eggs and toast...

Another Starfuck's ? Please, no more. They are worse than Duane Reade or CVS or TD Bank.

Looks like Starbucks is finally facing up to Realitea.

What do you call having 3 Starbucks within a 4 block radius? Insanitea.

What is tea, that stuff old ladies drink? Opening a spacious storefront in the real estate assrape capital of the world to sell nothing but tea was a bad idea. We live in a coffee age, ain't nobody giving two shits about tea in NYC in 2016, never mind tea at premium prices.

I thought Starbucks was closing stores, not opening more in an already over saturated market.

...they still have a lease to deal with!

Love Starbucks, start my mornings with their Via instant though the lines keep me going back to my local bodega for afternoon iced coffee fix so maybe this will ease congestion at Astor Place store. Their egg salad sandwich is my preferred fast food option in a pinch--much better than same at Pret or deli and on healthy bread.

This past weekend, I had a coffee at the Starbucks at the Gare de Nord Station in Paris. If confirms everything I find unpleasant about Starbucks anywhere in the world. The attempt to make you believe you are getting personalized service (what is your name?) etc, means long slow lines. We pre take your order, then confirm your order as you pay and then you bring your receipt to the "barista" who makes your coffee and then tries to find out who the person is. Chaos. Starbucks has been in business a long time, but for my euros / dollars it doesn't understand that it is only coffee. Get on with it, move the service along at a faster pace. In NY I live right near the Tevania outlet (good by, without regrets). The same thing, pretentiousness about what kind of tea they are serving in paper cups.

@2:57pm: Well said! I avoid Starbucks for the simple reason that when I want coffee, I just want coffee, and not to have a complex & inefficient interaction with Starbucks employees.

Starbucks are great for a free cup of water and bathrooms.

I dont understand it. It's so easy to make good coffee these days.

@2:57: I agree that pre-orders are a nightmare. I only want to order my coffee once. End of story. And why does it take at least three Starbuckians to run a store. Is serving coffee that complicated?

Back in the 80s and 90s I would regularly stop with friends at Silver Spurs for a late dinner, it was dependable and a nice cozy atmosphere. It's a shame the spot will be used for yet another Starbucks.

silver spurs was one place that made cinnamon toast with real butter and knew what toast was.
and unless it was totally crowded they didn't mind if all you ordered was cinnamon toast and coffee

I've been avoiding Starbucks for over 10 years—no reason to stop now.

Although I admit I will use their bathrooms in a weak moment; that's how you know they've got you. I haven't eaten McDonald's food in over 25 years, though, and I'm well-acquainted with their bathrooms too.

I never got the tea shop concept. Reminds me of that old Guido Sarducci ad for the Mr. Tea machine. "Just put your teabag in the cup, pour boiling water into the receptacle, and voila, 1 minute later you have tea."

Wow so many Pretentious Posters here. Starbucks is is a GREAT American corporation that does wonderful things for American Veterans, their Employees and their Customers. Keep doing what you are doing. You are great.
Oh yeah, their founder is more of a New Yorker than any of the pretentious holier-than-thou Posters here.

I don't think that the question is whether the CEO of this mega-corporation is a New Yorker by birth or not. Starbucks is an enterprise whose reach is throughout the United States, Europe, and China (if not other places in the world). Nor, do I think, that anyone is belittling the corporate public engagement of Starbucks. Some of us just think that the process of ordering a cup of coffee has become somewhat precious--as one poster pointed out: preordering, ordering (giving your name and having them write it on the cup), paying, and then waiting to get the barista (when did this become a word and a profession) to make the coffee. I guess if you just want a cup of coffee, light, two sugars (you supply the simply order you like), you don't go to Starbucks and pay their prices. But if you want an Ethiopian blend, with pure cane sugar, and a mixture of various milks--then Starbucks is for you. To me, it its just how pretentious I feel people are that makes me stay away (that and the inflated prices).

I buy the giant yellow tub of Cafe Bustelo Espresso at the Fine Fare or Key Food and make insanely delicious coffee at home for a fraction of the price. And if I want to splurge I buy a killer croissant and cappuccino at Croissanteria.
Also, I don't like the decor at Starbucks. It's just not cute in my opinion.

Frankly, I never found Teavana to be much of a tea shop. Overpriced for its quality and rather relentless about upselling. The preponderance of heavily flavored teas seems to make it a place to sell tea to people who don't actually much like tea. I stopped going into their retail outlets--after I've refused assistance twice while I browse and am still followed by someone trying to sell me things, I leave.

I'd rather go to a real tea shop.

Why pay three to five dollars a cup for coffee or tea at Starbucks when you can make the same thing at home for about 5-25 cents a cup? You can buy 100 bags of decent tea for 5 dollars. That's 5 cents a cup. Espresso drinks can be made for 10-25 cents a cup. If you want to go sip your drink at Starbucks, just put your drink into one of their refillable cups and go sit there all day long. If you buy coffee, tea or ice tea at Starbucks, then don't forget to get the free refills with a registered card, which cuts the cost in half. And bring a sandwich or your own snacks. Then save that cup and use it with your own drink the next time around. You can even rinse it out in Starbucks bathroom free of charge. Or fill it up with some free water on your way out. These place are just sucking consumers pockets dry with high margin concoctions, as proven by their sky high stock price and billionaire founders. Don't just go to Starbucks, bring your own drinks and ScrewBucks.

Inevitable. This isn't London. Anyway, if you want to buy good tea in NYC you go to Chinatown.