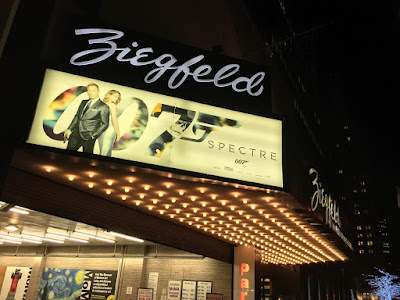 Venturing up to Midtown for a post...In the past, oh, three years, I figured this would be my last trip to the Ziegfeld Theatre on 54th Street. The grand single-screen theater has seemingly been on Deathwatch for years. But it always managed to survive.

Now the time has come to really say goodbye (if you are the type to say goodbye to movie theaters): Steve Cuozzo at the Post is reporting this afternoon that the space will become "a spectacular high-end event space ... a mecca for society galas and corporate events, to open in fall 2017 after a two-year renovation of the space."

The theater, which opened in 1969, will close in a few more weeks. "The Force Awakens" is currently playing.

The Ziegfeld Theatre was a Broadway theatre formerly located at the intersection of Sixth Avenue and 54th Street in Manhattan, New York City. It was built in 1927 and razed in 1966. The theatre was named for Florenz Ziegfeld, who built the theatre with financial backing from William Randolph Hearst.

The 'new' Zeigfeld Theater, built just a few hundred feet from the original Ziegfeld theater, opened in December 1969 and the movie house was one of the last big palaces built in the United States.

The theater features 1,169 seats, with 863 seats in the front section and 306 seats in the raised balcony section in the rear. The interior is decorated with sumptous red carpeting and abundant gold trim.

I saw That's Entertainment there when I was a teen-ager + was impressed with the size and elegance of the place.

When I got older and discovered more NYC history, I was disappointed that the original theater had been wiped out, like so many other NYC architectural jewels....

My past is truly dissolving

Just there for Star Wars -- it wasn't as big as I remembered. Lack of Panavision? Distracting 3D? I'm getting older? Movies getting smaller? On the whole I will be more crushed if places like IFC, Sunshine, Quad etc. go away.

This was the theatre I saw my first movie in NY, Altered States by Ken Russell. Even then the movie was loud and I had never heard a sound system like it before. The interiors always reminded me of the costumes and sets from the movie Funny Girl, you know fake revisionist gilded age but on a budget.

...and another sliver of the true New York falls off into the ether. As much as I loved going to the Ziegfeld, there were few reasons to go these days either because they were a) showing the latest CGI children's movie OR the movie itself just plain sucked. I saw many a great film there over the last 25-30 years including some great revival shows when they would occasionally run a classics festival, and just recently saw the new Star Wars film there. Streaming/on demand services have put a dent in the motivation for showing up at a movie theater, at the same time though if a movie generates enough excitement it can and will draw an audience. 'The Hateful 8' has been playing at the City Cinemas 12th Street and there have been lines around the corner. If you build it they will come ...

there's got to be space for a 1000 foot condo tower there.

"Dreamgirls" - 2 guys jumping out of their seats after Hudson sang
"Chicago" - 100 percent packed theater, great sound. Clearly best picture, which it won
"West Side Story" - Never knew there was a "grittiness" to the film version of WSS until I saw it on the Zeigfeld's screen. Definitely changed my thoughts on the film.

As a child and teenager we would get to come in to see special moveis -- I particularly remember seeing the first planet of the apes there -- and the intense shock I felt to discover it was set in NYC with the statue of liberty in sand! -- and also seeing lawrence of arabia there s crowded that we had to sitin the front seat ( talk about being in a movie!)
No doubt imax theaters were created to simulate the experience one gets watching a movie in the seigfeild but they can not compare!
we all will loose much inthe closeing of the zeifeild -- The movie industry should have considered preserving it for its great history and the NYC hollywood experience