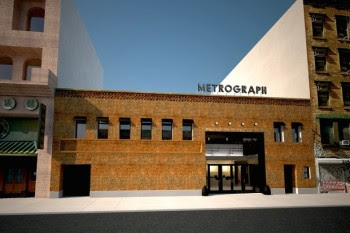 Metrograph, a two-theater movie house at 7 Ludlow St., near Canal, has unveiled its first season of programming starting in March.

Jean Eustache (March 9-17)
Extended engagements of Eustache's two features "The Mother and the Whore" (1973) and "Mes Petites Amoureuses" (1974), along with "Les Mauvaises Fréquentations" (1963), "Santa Claus Has Blue Eyes" (1967) and more rare imported prints. Presented with support from the Cultural Services of the French Embassy and Institut Français. Special thanks to Amélie Garin Davet, Mathieu Fournet, and Françoise Lebrun

Randomly, the trailer for "The Clock" to break up all this copy...

Three Wiseman (March 25 - April 14)
Among the greatest and most influential documentary filmmakers who ever lived, Frederick Wiseman is more than just a capturer of reality on screen: he’s a conjurer of unforgettable images and a true artist, chronicling the last half century of American life. Metrograph will show three of his earliest masterpieces — "Titicut Follies" (1967), "High School" (1968), and "Hospital" (1970) — in new 35mm prints. The films were preserved by the Library of Congress National Audio-Visual Conservation Center from original camera negatives in the Zipporah Films Collection.

Indiewire, The Lo-Down and DNAinfo each had sizable previews with the full schedules.

For more on Metrograph and its founder, Alexander Och, head on over to The Lo-Down.

Meanwhile, I'll end with a plug for one of my favorite places in the neighborhood — Anthology Film Archives on Second Avenue and East Second Street.
Posted by Grieve at 4:15 AM

Looks great for a special occasion and deep track movie you've wanted to see, or haven't seen in a long time. The liquor license and culinary forward cafe may turn some people off but the proprietors are offering the full service to the dinner and a movie goers, can't really knock them for that. Could be annoying if it becomes a crowded "scene" hangout and people can go eat and drink without purchasing tickets...

I agree, Michael. If it becomes a douchefest it's going to be havoc for the area and the establishment itself.
The programming looks great, so as long as they don't turn it into fucking Beauty and Essex, this could be something very nice.