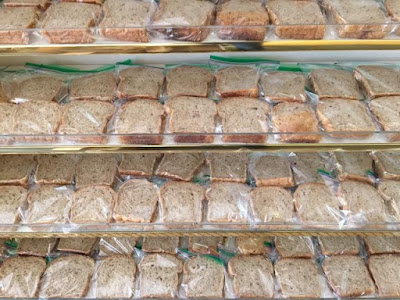 Brooklyn-based artist Jessica Olah is currently on a mission to make several thousand peanut butter and jelly sandwiches — for the sake of art, empathy for her mother and a good cause... 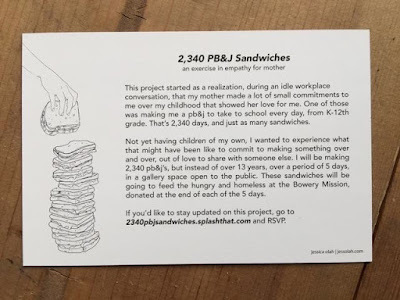 Olah estimated that from September 1990 through May 2004, her mother made 2,340 sandwiches for her to take to school.

"I was bringing someone their lunch [one day] and just marveling over the fact that my mom made me school lunches everyday," said Olah, 30. "I stopped and thought, 'Wow, my mom made me lunch every day, not only when I was younger but until high school.' That is a lot of peanut butter and jelly sandwiches."

Inspired to "exercise empathy" for her mother, Olah began the task of making the same number of peanut butter and jelly sandwiches in five days...

People can come on by and watch this performance installation of sorts — titled "2,340 PB&J Sandwiches" — during the posted hours... 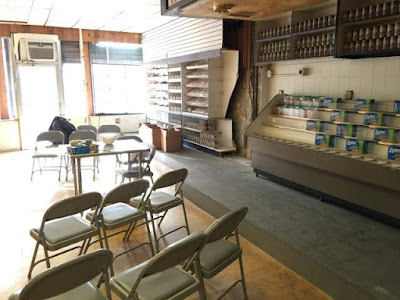 Each day, she is donating the sandwiches to The Bowery Mission. 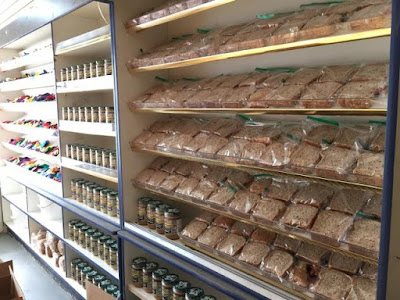 As she told DNAinfo: "I wanted to do this as a meditation on what my mother has done. The peanut butter and jelly sandwich is a metaphor for a lot of small tasks mothers might do."

Glad that the food is going to the mission and not the trash!

If it fills up space.. it's considered art today. Jasper Johns, Frank Stella, Roy Lichtenstein made art in the EV. Today it's reduced to PBJ sandwiches.

I'm surprised the health department is ok with this

Bowery Mission accepts prepared foods as long as the packaging is intact.

Bravo for Jessica Olah. And her mother.

Always use smooth, never chunky, with a raspberry, blackberry or strawberry jam. The best.

I live on c, can I have a blackberry.?

Why not make them available for the neighborhood? And then the kids can rate your P&J skills. After, that is, they have a good old P&J food fight.

4:10 - I mean, why isn't everything for everyone all the time? Why is this only limited to this galaxy? How come this can't be extended to other dimension too? Why are you acting like beings in the the fourth dimension wouldn't like a PB&J with an extremely long shadow?

Lol, this takes me back to my art school days.

I was spoiled. If my mom made p&j every day, I would have strangled her, or at least thought about it several times. And I would have vented that anger in a comedy routine ridiculing her laziness and lack of creativity. Olah has looked at her mom's actions positively and has hinored them with more positively, I hope the folks at Bowery Mission like P&J.

@EvGrieve. Almond butter is perfectly fine, but that's are not the same thing. If you eat an almond butter and jelly sandwich than its not Peanut Butter Jelly Time, it's Almond Butter Jelly Time. It's not a PBJ, it's an ABJ. Same thing goes for Fluffernutter. If you have peanut allergies then any substitute will just have to do.

My mother made me a peanut butter and jelly sandwich every day through high school also. There might have been a short foray into tuna but it didn't last long. My husband reckons that his mom made 10 sandwiches a day for their family for many, many years. He made our son a sandwich a day for 14 years but alternated between pb&j and salami. And that included summers where he had to bring lunch to camp. It's a lot of sandwiches.

Took my daughter to see this, keeping her outside the cube. Well worth it.