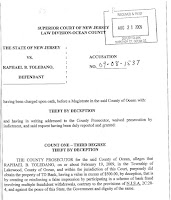 In compiling nearly a 20-building portfolio in the East Village, 25-year-old landlord Raphael Toledano has been accused of allegedly harassing his tenants, and other misdeeds, according to several published reports and a letter from the Toledano Tenants Coalition.

Now tenants are learning about Toledano's criminal past in an article published this week at The Villager. According to the paper, "he was convicted of aggravated assault and causing bodily injury less than four years ago, and once was charged with trying to swindle a bank out of hundreds of dollars, according to New Jersey court records and police reports."

In a 2012 confrontation that landed two teenagers in the hospital, Toledano allegedly beat the two youths with what police reports alternatively describe as a “crowbar,” “a branch” and “a metal or wood object approximately two and a half feet long.”

And in a separate case three years earlier, Toledano was charged with defrauding TD Bank of $500 in a scheme involving multiple withdrawals from three different banks.

A spokesperson for Toledano and his company, Brookhill Properties, dismissed this disclosure as "character assassination," noting that the incidents "have absolutely nothing to do with Brookhill Properties or the company's conduct as a landlord."
Posted by Grieve at 12:00 PM

i submitted a comment a while back (never published)--mentioning the coalition letter and the phraseology of using "MR" --once again--******g Toledano will never respond to civility--but i wish them a bunch of good luck :)

What a turd this guy is

How does a 25 year old amass a portfolio of 20 buildings?

he worked really hard, made wise choices, and bought them /sarcasm

he inherited them, like every other lucky rich person.

Oh Raffi what are we going to do with you? Boys will be boys.

So his recent behaviors as a landlord, er slumlord, sort of match his criminal past. A black dog never changes its colors, folks.

I like how pointing out terrible/illegal behavior is "character assassination."

That OJ Simpson was a murderer.
Let his character alone!

Toledano has already very effectively done his own character assassination on himself! The rest is just careful reporting. Thank you, VILLAGER!

Do you sometimes get the feeling that all these kids running around buying buildings in the East Village by the dozens are just fronting for people who live in Jersey, drive Escalades, own strip clubs, and operate waste management companies? Yeah, me too.