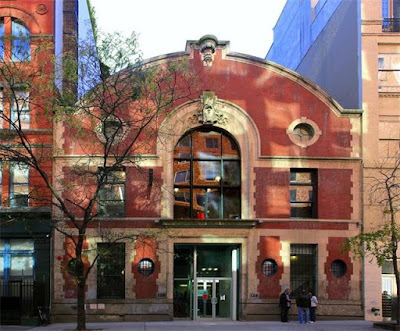 Back in August, 126-128 E. 13th St between Third Avenue and Fourth Avenue and an adjacent property on East 12th Street arrived on the sales market.

And now, The Real Deal reports the property has a new owner: Investor Arthur Minerof's Milan Associates picked up the two buildings for $21.5 million, or $1,670 per square foot.

The dance studio Peridance has a lease through 2028 (with a 5-year option after that) while the 12th Street side houses the Alliance Brazilian Jiu-Jitsu martial arts studio.

Per The Real Deal: "Minerof ... is planning a long-term hold of the properties."

As for 126-128 E. 13th St. (as we've cut-and-pasted before), this is believed to be the last surviving horse and carriage auction mart building in New York City, according to the Greenwich Village Society for Historic Preservation (GVSHP), who helped keep the structure from becoming a seven-story condo back in 2006.

In addition, the building served as the studio of artist Frank Stella, and during World War II was an assembly-line training center for women. (Read more about the building's history at the GVSHP website here.)

In May 2012, the NYC Landmarks Preservation Commission voted unanimously to landmark the building. Several months before this vote, a State Supreme Court judge ordered the sale of the property after the condo developers lost a foreclosure suit, according to The Real Deal.

Image via Cushman & Wakefield
Posted by Grieve at 4:15 AM

Despite the Landmark status the owners will weasel a way to add a condo towner on top someday. There is no stopping money and laws are just suggestions in this city now.

On a sidenote, people who think it's okay to run their dog(s) in Sauer park because we had snow the other day should consider following the parks rules as well. This is a children's playground and NOT a dog run. There are 2 separate signs with NO DOGS ALLOWED on the gates. Please use the very expensive to build and maintain dog run in Tompkins Square Park.

"Minerof ... is planning a long-term hold of the properties"- so in this insane market that means what, about 2 1/2 months?