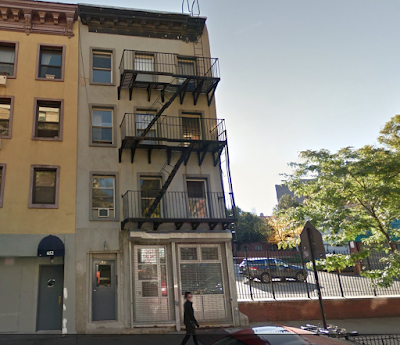 There are big plans for this unassuming 4-story building at 650 E. Sixth St. between Avenue B and Avenue C.

Plans were filed this week for a 7-story building on the property that's closer to Avenue C.

Here's New York Yimby, who had the scoop on this development: "The 8,491-square-foot project will include 7,761 square feet of residential space, which means units will average 1,552 square feet apiece, indicative of condominiums."

Public records show that this building changed hands for $2.8 million in August 2013. The new owner is named East Village LLC in the filing.

As NYY noted, the "existing four-story, three-unit building must first be demolished."
Posted by Grieve at 4:20 AM

That's my block. Sweet - luxury right across from the two giant semis parked there since sandy, providing "mobile heating" the projects that face c. and I'm dreading the demo construction that will inevitably start a few doors down where the two single-story buildings are. Now we'll have two major constructions on this block. Fantastic.

Sandy report? Pretty sure this was ground zero.

Re: the mobile heating semis:

The two giants semis parked will be gone by the end of the Spring.
It is privately owned
They won't be glassy Condos.
They will be East Village style buildings in respect of the neighborhood