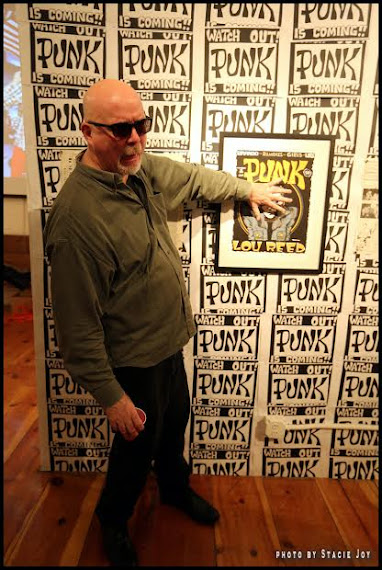 The exhibition celebrating the 40th anniversary of the first issue of Punk Magazine continues at Howl! Happening at 6 E. First St. between the Bowery and Second Avenue (through Jan. 30).

On Jan. 15, I interviewed founding editor (and East Village resident) John Holmstrom on East Village Radio. (Unfortunately, the show is not archived.) Holmstrom picked the playlist for the show, and included comments about each song... sharing it here now...

1. "You Drive Me Nervous" by the Alice Cooper Band
The first punk rock band I saw live and it changed my life forever...

2. "Kick Out The Jams" by Blue Oyster Cult
BOC was a truly twisted, crazed live heavy metal band that had Patti Smith and Helen Wheels as lyricists, and whose managers convinced CBS Records to sign The Dictators. And of course, the MC5 created punk rock by getting The Stooges signed to their record label.

3. "I Wanna Be Your Dog" by Iggy Pop and The Stooges
This was the prototype punk song, covered by so many punk rock bands over the years.

5. "Riot In Cell Block No. 9 by Doctor Feelgood
Another "pub rock band from England. The Ramones opened for Dr. Feelgood at the Bottom Line in early 1976... Just the most amazing show.

6. "Bad Girls" by the New York Dolls
This was the first band I went to see at a small club: like Club 82, the drag club. Didn't like their fashion sense but love the music.

7. "My Generation" by The Patti Smith Group
Patti had a lot to do with putting CBGB on the map, she and her band made some great music, I need to give them props.

8. "(I Live For) Cars And Girls" by The Dictators
I picked up the first Dictators LP, loved it to death, played it for Ged Dunn Jr. and Mr. McNeil, and it inspired us to start a magazine. Oddly, enough, everyone in the band hates it!

9. "Judy Is a Punk" by the Ramones
I like the first Ramones best, it's very close to what they sounded like live at CBGB.

10. "New Rose" by The Damned
First punk band from England to release a record, tour the states, play at CBGB, etc. This was punk rock before it became formalized.

11. "Rocket USA" by Suicide
They often opened for the Ramones, and were the first-ever band to call themselves "punk." Even though people would now call this techno, Suicide was truly a punk rock band.

12. "I'm on E" by Blondie
I just love this song. It runs through my head whenever things are going bad and I am out of money, energy, whatever. Blondie were so much fun to work with, open to everything.

14. "I Wanna Be Me" by the Sex Pistols
I always liked their B-sides better than the singles. The lyrics are brilliant, and aimed at people in the media (like me).

15. "Ready, Steady, Go" by Generation X
I always liked their debut album so much. "Purist" punks hated them: too pretty, too polished. In a way, they were the blueprint for pop-punk bands like Green Day, Blink 182, etc.

16. "Ain't Nothing To Do" by the Dead Boys
Great American punk rock band. Amazing live performances.

17. "Teenagers From Mars" by the Misfits
We planned a cover story on The Misfits, but couldn't do it: we were forced out of business unexpectedly.

18. "I Wanna Be Famous" by The Bullys
Great NYC punk band that still performs live.

20. "Against All Authority" by the Bullys
Brilliant song by them IMO.

John Holmstrom on the CBGB movie and the East Village of 2013
Posted by Grieve at 2:43 PM

From the snow sculpture in the park to Holstrom's playlist, EV really woke me up this morning.
Best EVGrieve day ever!!!. I'm grateful for you, EV. Punk out!!!