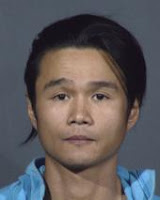 Francis Salud, who is under arrest for the apparent random slashing of a man on East Sixth Street on Jan. 16, spoke to a Post reporter yesterday at the Manhattan Detention Complex.

Salud told The Post he was on his way to score some pot when victim Anthony Christopher Smith walked toward him near Third Avenue and East Sixth Street on Jan. 16.

“Yo, Jamaica, you got some of that good bud?” Salud said he asked Smith.

“I don’t even f–k with you gooks,” Smith responded, according to Salud.

Salud added, “The government is profiting from the conflict between Caucasians and African-Americans, and it’s getting worse.”

Smith strongly denied that he spoke with his attacker. "There was no conversation," he told the Post. "I was attacked."

As previously reported, Smith underwent eight hours of surgery, and needed nearly 150 stitches for the wound from his right ear to his lips. He has partial paralysis on the right side of his face because several nerves were severed.

Previously
Posted by Grieve at 9:47 AM

Leave it to the Post to find a way to connect it to cannabis.

Hey Francis, you called a black guy you don't even know "Jamaica" and assumed he was a drug dealer, and your problem is that he supposedly called you a gook? So it's OK to slash someone across the face because they called you a bad name after you called them a name, and assumed they sold drugs because they fit your sterpotype of a drug dealer? As if buying illegal drugs on the street from strangers is supposed to be a safe thing to do. You know better than that. And what's up with “The government is profiting from the conflict between Caucasians and African-Americans?" Have you even looked in the mirror recently and noticed that you are not in fact Caucasian? You slashed a stranger across the face and injured him for life. You terrorized a neighborhood in a city filled with slashings and road rage from walking time bombs like you. Don't try to turn this into some kind of "government conspiracy" or racial issue, or try to portray yourself as the victim. You are as dangerous and scary as your picture suggests, and just as delusional. Something tells me Bellevue is going to need a lot more strait jackets real soon. I hope yours fits you to a tee.

“The government is profiting from the conflict between Caucasians and African-Americans, and it’s getting worse.”

Well, he does have a point.

Race has become such a joke in this country, even a mentally disturbed slasher uses it as an excuse! Wow! What next... complaints about the Oscar nominations?! Maybe Jada Pinkett Smith will slash some old white Oscar voter!

Chop this criminals hands off and put him back on the street.

Umm why you carrying a blade in the first place? Sounds like he was looking for conflict.