Where the empty storefronts are 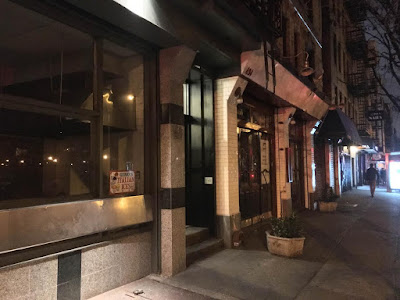 As we noted last week, Avenue A between St. Mark's Place and East Ninth Street is awfully quiet at the moment. For now, just two of seven businesses are open on the block.

This situation will likely change soon enough. Lucy's will return. (The sign on the door says closed until further notice. She usually does take several breaks during the year, though those generally occur in late July-early August and late November-early December.)

The former 10 Degrees Bistro space will become a cajun-style restaurant via the team behind Shoolbred's and Ninth Ward. And the for rent signs have been removed from the former Sustainable NYC storefront. One EVG reader saw the folks from Top A Nails next door in here. (That could have just been a coincidence.)

Anyway, seems like a good time to look at a few other blocks with multiple empty storefronts... such as East 14th Street between First Avenue and Second Avenue... Danny's Cycles closed this location (due to a rent increase, according to some longtime customers) ... next door, the space has been Vegtown Juice, Chubby Mary's and Led Zeppole in the past three-plus years... 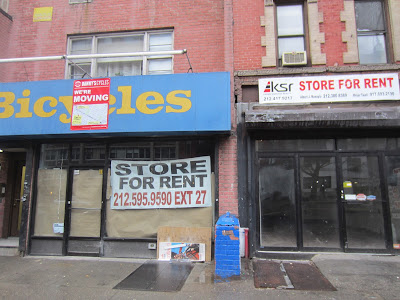 The west side of Third Avenue between East Ninth Street and East 10th Street has seen a lot of turnover in the past year, including the departures of East Village Cheese and Excel Art and Framing Store (both found new locations) and Organic Avenue. Five spaces are vacant (two of them are for rent).

There have been rumors that the Duane Reade at East 10th Street will eventually expand into at least two of the empty storefronts (and there are now approved work permits for the renovation on file with the city)... 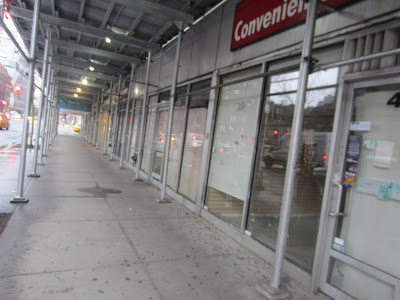 ... and directly across Third Avenue — the retail strip in the base of NYU's Alumni Hall between East Ninth Street and East 10th Street has many vacancies: Four of six storefronts are empty ... Citi Habitats moved out in June 2014 ... Birdbath Neighborhood Green Bakery closed in July 2014 ... the Subway sandwich shop closed early last October ... followed by Saint's Alp Teahouse ... 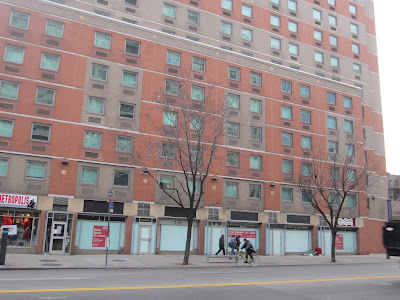 ... the north side of St. Mark's Place has been hard hit... starting with the (temporary for now) closure of Nino's on the corner... then four of the next five storefronts are empty. The former Hop Devil Grill, Ton-Up Cafe, the Belgian Room and Luca Bar. 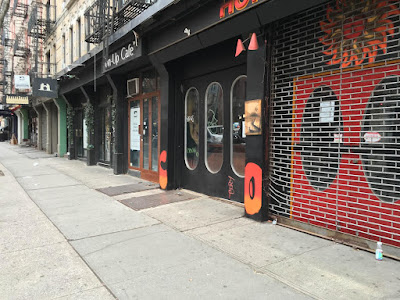 There is one incoming tenant — Sweethaus Cupcake Cafe is apparently opening at the old Luca Bar space at No. 119. 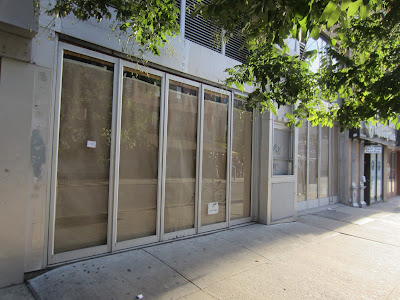 ...and another long-empty block to note: Avenue B between East Fourth Street and East Third Street... these four storefronts have been unoccupied for years now, including the old Max restaurant at No. 51, now entering its fourth year of vacancy ... and No. 47, the former Le Souk, has been mostly barren for nearly seven years.

There have been a number of brokers trying to rent these spaces. For now, there aren't any for rent signs on the retail properties... 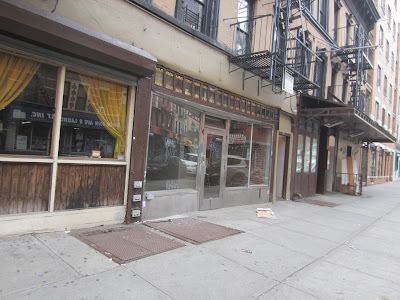 Previously on EV Grieve:
There are more than 20 empty storefronts along Avenue B (2008)

If these spaces are not rented, sometimes for years, why aren't the asking rents reduced? Is it the tax law that incentivizes the owners to keep them empty?

Am I the only enjoying the quiet these empty storefront provide? Not all but some will surely become loud restaurant/bars or even worse a sports bar soon enough so "enjoy the silence".

there must be a reason for there to be so many empty stores. tax deduction - advantage, something. i don't think that's enough to keep a store empty when commercial rents are so sky-high, even with a slightly reduced rent.
do you think the rezoning plan that has not passed might have something to do with it? or are the landlords contemplating selling or emptying the buildings?
there are also a lot of empty stores out of the neighborhood, not all of them with for rent signs.


The last time I saw so many empty store fronts in such a small area was "the bad old days".

@ Anon @ 9:01...I'm with you on the quiet aspect...but, I'd like it if there were stores, useful ones, it is a shame that it seems we only get a choice between empty windows and Party Central.

Like, Sock Man is out now, and I bought stuff there every other month. My kid grows, he needs new socks. Socks wear out, I buy new ones. *That* store is useful.

It's such a weird combination of upscale expensive development/construction and empty storefronts/blight. Like when Benny's Burritos closed, it was still full every night. But these small-business owners can't make a profit at these rents unless they go so upscale that they're only affordable to the new 1%ers buying into the neighborhood. It makes no sense. Even the new rich moving in, presumably, are not going to want a neighborhood where the blocks are lined with empty storefronts.

And don't forget the derelict hole on corner of Ave A and 5th st. where the drugstore used to be.

On a happier note, there is a dry cleaners again at 60 East 3rd Street (where Sunrise Cleaners was and closed in 2014). Just something to add to the chatter.

"it's a shame we only get a choice between empty windows and Party Central."

Exactly! Thank you, olympiasepiriot - that is a good summary of the state of our neighborhood: Run by developers for their own benefit, with all the consequences suffered by those of us who actually live here.

Businesses used to open because there was a need for them in the area, but now we just get whatever businesses that can afford the lunatic asking rents. I hate living in an alcohol-ghetto.

Most new businesses fail within the first five years of their opening. Small business owners in the EV are finding that the new escalated levels of commercial rent will prohibit them from opening a business in these empty spaces. That's the reason these spaces are empty now. The new residential rents, which are very high, are causing landlords to overstate the potential of their empty spaces. But business owners are not being fooled. Instead the landlords are just fooling themselves.
Perhaps they will figure it out. But don't bet on it.

"he new residential rents, which are very high, are causing landlords to overstate the potential of their empty spaces. But business owners are not being fooled. Instead the landlords are just fooling themselves."

I'm not so sure about that, in the past couple of years a lot of businesses have opened and closed within the first years, optimistic that it would only take some weeks before they would prosper. I opened my business here 16 years ago and new I had to have a good lease and enough backup funds to get me through the first couple of years or I was doomed to fail. The great thing about the EV was it was the launching pad for many businesses which grew too big for our on average small commercial spaces. Today it makes no difference how small a storefront really is, landlords and their real-estate minions think Prada will move in soon.

It's all catching up in the EV. My building has 7 apartments, 2 are posted by the landlord owing $24,000. each. Can't pay the rent. The restaurant owners I know tell me business is down 15% over last year and has been slowly declining for a while now. Greed and stupidity have had its way for years in the EV. Now it's payback time. The frat crowd supports sports bars, cheap takeout and struggles to pay the rent. Maybe we'll get more mature renters and a more diverse retail. Maybe.

@12:07pm: I join you in hoping we will get more mature renters, but I believe that as long as this area is dominated by dormitories, we'll be stuck with these bars & other "frat-friendly" businesses.

FWIW, the same thing is happening at my little neighborhood on the borderline between carnegie hill and east harlem, tons of long-empty storefronts. There must be tax breaks involved, otherwise why would so much prime real estate go empty for so long? Even the fancy little places for maternity clothes and cute widdle kidde clothes are going bust, along with the mom-n-pop shops that had been here forever.

I live in 6th st btwn 1st and 2nd and more than half of the storefronts are empty and have been for years. At least three long-established Indian restaurants out in the last 2 years. (We gained David Schwimmer's custom mansion, though.)

One reason why the storefronts remain open is because many are former bars and restaurants, which were licensed by the State Liquor Authority. Once there is a license at a premise it is easier to open a new licensed premise at that location. In fact, an restauranteur once told me that he went to the building owner and told them that he wanted to change the restaurant to a furniture store, and was told that he cannot do this. A license brings up the market value of the building, this is quite profitable for the building owners. Who cares that the neighborhood has lost necessary goods and services, like laundromats, shoe cobblers, bakeries, etc. It is all about the bottom line.

Real estate is a long game. Count up the amount of new residential units coming on the market in the neighborhood soon. There's going to be a lot more people living here, that will make the storefronts worth more. Vacant, no taxable income, so wait for the next wave of top top dollar.