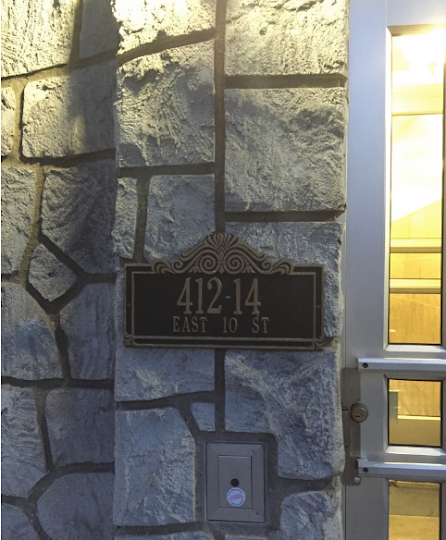 The ceremony will highlight Lead Belly's time in New York, when he played for children in Tompkins Square Park, performed at Carnegie Hall, Town Hall, and the Vanguard, was the subject of two New Yorker pieces during his lifetime, and laid the groundwork for the folk revival.

A plaque will be affixed to the building which Lead Belly called home for around a decade in the 1940s, and where he hosted folk greats including Woody Guthrie, Pete Seeger, and Cisco Houston.

The event will commence at 3 pm (the start time was originally scheduled for 4:30), and will include special guests. Music may follow at a nearby establishment. 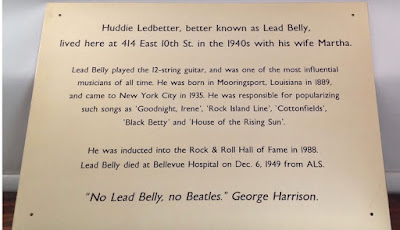 Lead Belly, who died on 1949, was born on this date in 1888. There is a Lead Belly Fest at Carnegie Hall's Stern Auditorium on Feb. 4 featuring Buddy Guy, Eric Burdon of The Animals and Marky Ramone, among many other musicians.

How cool is that?!? I had no idea; will definitely wander down and check this out. Wish Howlin' Wolf had lived in the nabe, he's my personal fave, but Leadbelly is a wonderful substitute.

A plaque should be affixed to 103 Ave. A honoring Julius and Ethel Rosenberg, who lived there in the 1940s.
They were assassinated by the goons at Pyongyang-on-the-Potomac.

And I always thought it was "Leadbelly". That's what I always called him. Now I am so embarrassed.

Lead Belly is on that East Village celebrity map (the map itself is not to scale and hard to read) but as I walk by here all the time, this block has all new meaning for me!

For those who may not be familiar with his music, here's a video playlist from the Lead Belly Fest in London last June:


(AMAZING that Eric Burdon, at 73-years old, can still wipe the floor with "House of the Rising Sun". Just saw Eric 2 months ago, now 74, and the performance was TWICE as good as the vid in the playlist......AMAZING! ;^)