Renderings arrive as construction kicks in at 438 E. 14th St. 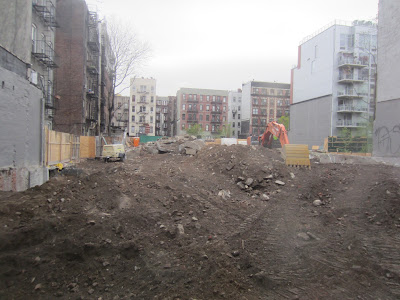 Construction activity has picked up in the last week-plus at 438 E. 14th St., site of the former Peter Stuyvesant Post Office.... 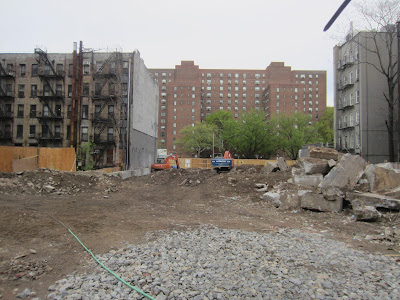 And along with this work ... the renderings have arrived on the plywood here between Avenue A and First Avenue... providing the first, official look at the new retail-residential building on the way in (and up)... 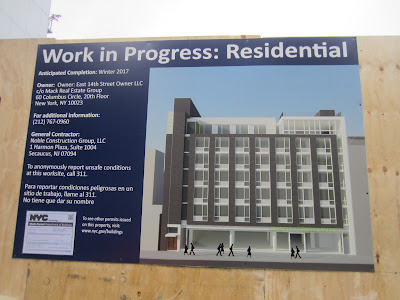 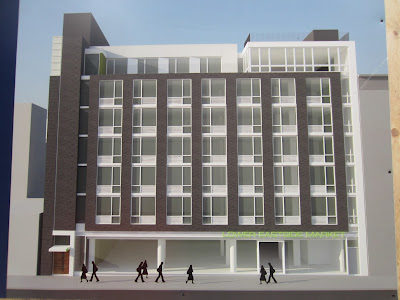 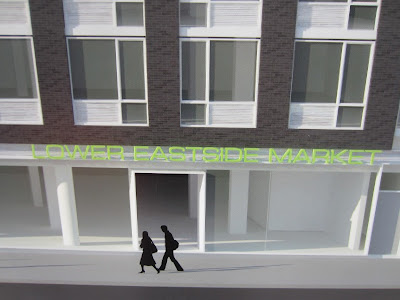 We couldn't find the information about the project at the website of Benenson Capital Partners, whose company has owned the East 14th Street property since the 1940s. In February, we found the following about the new building:

Benenson and the Mack Real Estate Group have formed a joint venture to develop a mixed-use residential and ground floor retail property in New York City's East Village. The 80/20 property will provide both market and affordable housing units. The property is located less than a block from the L train and within blocks of Union Square, which is one of New York's busiest subway stations. Construction is expected to begin shortly and end in late 2016 or early 2017.

In any event, this makes seven active construction sites in a span of several blocks...

Just the kind of middle America corporate park banality we've come to expect. And just in time for the L train shut down. Have fun with the lack of transportation.

When I see buildings like this, it makes me really wonder about the architects.

After they design such a banal building do they look at it and feel pride in their work? Do they think this awful gray box looks good?

Or is it that the developers want to build something as cheap as possible so they force the architects to come up with stuff like this? What an awful place to work that would be. Imagine going through years of schooling and really appreciating architecture as an art and then having to work at a place that spits crap like this out.

There's research showing that awful buildings like this have a psychological cost on people nearby.

Not ever new building looks this awful. Some actually look pretty good. However, it's a shame at the amount of crap like this is sprouting up.

I've never studied architecture, but I can pile boxes haphazardly on top of one another like nobody's business - anyone want to hire me to design the next "luxury" eyesore for the EV? I promise it'll look better than this!

Usually people have a bad reaction when architects push their art to the limits yet with time come to appreciate breakthrough design. In this case the owners settled or requested a throwback building taking cues from counsel flat building in the UK or socialist era housing seen in East Berlin. Let's face it NYC has not really led the architecture world since the 1930's but we keep sinking to new lows with these penny pinching lack of creativity buildings.

I like the tie-in between boredom and stress. Where is the architectural counterpart of Jane Jacobs? Let her ride to our rescue and call out these horrible architects for what they are--gulag planners.
I once asked an architect why modern architecture is so banal. He cited cost as one factor. Costs are increased by all the regulations and taxes propagated by the State entity.

I used to work with a guy who had trained as an architect in the 1990s. After about 10 years he quit and went to work in tech because he just couldn't face the destruction of his designs and shoddy workmanship of the lowest cost contractors the developers used - he said it was just soul crushing.

Told me that the final straw for him was walking around a new construction building he had designed and seeing all the cracks in the finishes, the cheating out on all the fittings and surfaces he had specced - and then to put the icing on the cake he put a tennis ball in the centre of one of the rooms and it rolled all the way into a corner! He said if they can't even have the building level and look pristine on the day it's finished how is it going to look in 10 or 15 years?

The post-Reagan USA (and post-Thatcher UK) is going to leave a legacy of cheapness and mean-ness for decades or centuries to come and will hopefully be looked back on as an example of how lowest cost and most profit is a terrible way to run a society. There will be almost nothing architecturally worth preserving in this city from the 1980s through to 2020s. Contrast that with the 1880s to 1920s buildings that are still standing and impressive today.

That is one ugly building.

Gojira, you nailed it!

I'm not against any development on 14th Street because it's been a dump forever - that's one thing that hasn't changed and therefore this, in theory, is an improvement. The ONLY problem with this and related developments is regarding TRANSPORTATION. How many buses can they run on 14th Street? Where's the 2nd AVENUE Subway? If you think everything is overloaded now, just wait in another year when all the buildings on Avenue A etc. open. As usual we invest in apartments without doing anything for the INFRASTRUCTURE.

I'm surprised no one called it what the style is academically referred to - 20th century brutality. The effort in design was to create a lack of horizon lines (think of Stuy Town space, one can never get a fix on the sky connecting to the ground) scrambled walkways Union Sq and Tompkins are good examples and obviously, monotony in design, which itself is very disorienting. The goal was to prevent potential mass gathering from being able to use the space effectively for organized protest. Anti-riot, as it were. The style was often used on university campuses. Seems that the 14th st. building et al is affecting such a style. Very disturbing.

Gojira, don't insult Soviet-style architecture like that!!! No acai bowl for you!

But just think, if the developers did build something that was architecturally desirable, you guys wouldn't get to sit around all day and spew your negative crap online about this and every other thing that gets built in NYC.

And FYI - you can't stop progress because of a pending subway closure. It's a short walk or bus ride to Union Square. And lastly, the post office that closed is now located at 14th and 1st.

Close your laptop, take an architectural design class and go sell your awesome ideas. You can change the game or just sit there and continue to bitch all day. I sadly predict you'll choose the latter.

Now where’s my file folder of the download of “The Fountainhead”, Bill, can you help me out here?

@2:33 Speaking of bitching, where do you teach your Bitching Online Class?

@12:34: I liked the slightly down-at-the-heels aspect of 14th Street, and I miss it now that developers are marching us all toward "luxury" uniformity and blandness.

As to the mismatch between development and infrastructure, the blame for that goes 100% squarely onto MICHAEL [I am the Emperor] BLOOMBERG (who, I guess, thought Citibikes would take care of all the transit improvements NYC would need). He's not the brightest bulb in the chandelier.

There was ZERO thought given by NYC under Bloomberg to any of the things that are concomitant with residential development, namely public transit, firehouses, police dept. coverage, schools, senior centers, etc. I'm pretty sure Bloomberg figured all the older people would just die off conveniently, so the city would just be filled with the young, the lovely, and the rich. And that is the problem with the Bloombergs of this world: they see what they want, and care nothing for the underpinnings that are not "sexy" but still quite necessary for a livable city - because, hey, lack of transit will never be a problem for Bloomberg!

Same shit with High Line and now the approved "Diller Island" on the Hudson River - these places are funded by billionaires, and they serve to make those people and their developer friends ever richer. Do you think anyone who did High Line development gave a flying fig about how there's essentially ZERO public transport west of 9th Avenue? NO, because, again, none of that affects the developers in any way!

Well well well... mom just joined the comment section.
I do praise beautiful buildings but when and where is there a new building in the neighborhood that could be considered so. This city is only about making a buck that's why anyone that has none has nowhere to live. This type of building has taken its cues from public housing of the post war period to save cost yet give people shelter. The big difference is these buildings are just about return on investment and the residents in most cases are paying market rate to live in a building that looks like public housing.

The mini mart post office is a lite cream cheese version. Visit Coope Square to see the two for one sale. Plus arch school takes five years minimum. There are some new construction bldgs that are relevant and lovely. 152 Second Avenue comes to mind.

Idk, I kind of like it. Nothing says classy modernity like a shit brown and off-white geometric facade.

And the people in the houses
All went to the university,
Where they were put in boxes
And they came out all the same,
And there's doctors and lawyers,
And business executives,
And they're all made out of ticky tacky
And they all look just the same.

I can't tell if that's a Fedders or a Friedrich air conditioner, but I hope they build it fast because summer is coming.