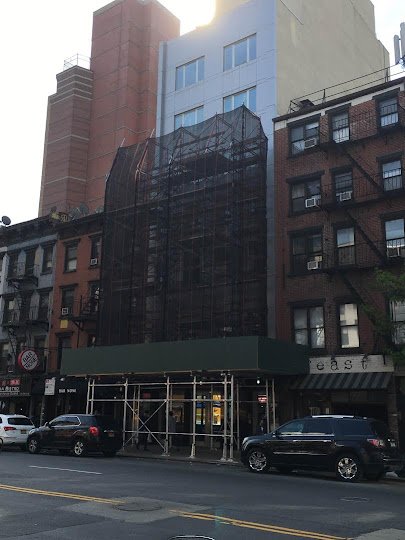 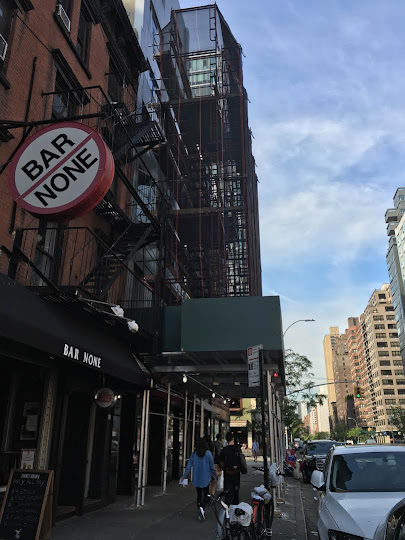 We don't know what kind of renovations are in store for the former three-level soccer bar for a new business called Vinyl. (The plans on file with the DOB only call for the sidewalk bridge and scaffolding.)

Bruce Caulfield, a former Nevada Smiths partner and veteran NYC bar and business owner, along with James Morrissey (The Late Late on East Houston) and Gerard McNamee (GM of Webster Hall) were OK'd by CB3 earlier this year to open a coffee house, vintage vinyl record store paying homage to Thin Lizzy and bar/restaurant all under one roof. (We wrote about it here.)

Nevada Smiths closed last September after nearly three-and-a-half years at this location. They were previously down the block at 74-76 Third Ave., which was razed to make way for The Nathaniel.

New concept for Nevada Smiths includes record store paying homage to Thin Lizzy, plus a bar
Posted by Grieve at 4:15 AM

So glad I don't live near 3rd avenue, it's become a campus strip mall.

Thin Lizzy tribute bar/restaurant/record shop called "Vinyl", ugh I don't understand the appeal guess I am too old. Or maybe I am too young.

@8:36am: So sorry I DO live near 3rd Avenue, b/c it's become a campus strip mall. NYU, thank for for exactly NOTHING, or more to the point, for being the catalyst for wrecking our neighborhood.

PS: As to Nevada Smith's, I would love to know what shenanigans took them out of business!