Report: Eastville Gardens sells for $44 million on 8th and C 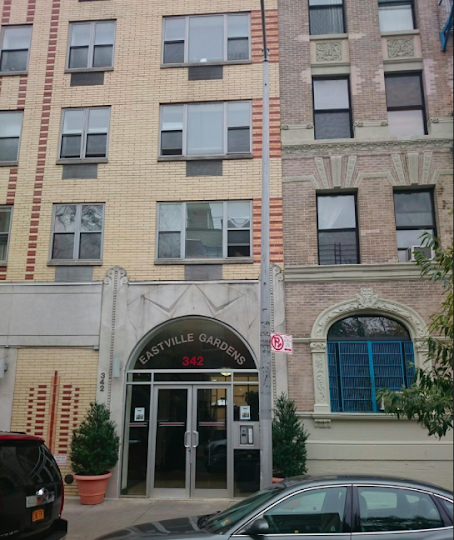 L+M Development Partners is the new owner of the Eastville Gardens, the 7-story residential building with an Associated Supermarket in the retail space on Eighth Street and Avenue C.

According to The Real Deal, who first reported on the transaction:

The developer paid $44 million to owner BFC Partners, which finished developing the building at 342 East 8th Street in 2002. The seven-story building, near Avenue C, has a mix of market-rate units and affordable housing. A Baptist church is also on the site, but doesn’t appear to be part of the deal.

The Commercial Observer reported that L+M and BFC swapped Manhattan residential properties as part of a 1031 exchange.

Eastville Gardens is on the site once occupied by El Jardin de la Esperanza.

Here's more on what happened there via The Local/New York Times:

In 1999, community gardeners occupied the site of the Esperanza garden with a giant frog sculpture that doubled as a tree house. Even after the site had been bulldozed, a late-night party descended into chaos as 150 people stormed the lot, clashing with the police and injuring seven officers. Gardeners had previously launched a court case, but the New York Supreme Court ruled the project could go ahead. (In response to a suit filed by then-attorney general Eliot L. Spitzer, another Supreme Court ruling halted all work on other community gardens — the day after the East Village site was bulldozed.)

Donald Capoccia, who operates BFC Partners, is behind the Jupiter 21 residential building at 11-17 Second Ave. ... as well as part of the venture developing Essex Crossing (along with L+M Development).

Not sure what, if anything, this might mean for the Associated. The owners can't seem to get a break. The same owners ran the Associated on West 14th Street that recently had to close due to an exorbitant rent hike ... as well as the Met Foods on Third Avenue and East 17th Street, which closed in April 2015. Principal owner Joseph Falzon and his partners have reportedly been working with Blackstone to come to an agreement for the Stuy Town Associated before their lease expires for that store in 2017.

And what will become of the unused lot between Eastville Gardens and 115 Avenue C? The only activity there the past 14 years has been someone cutting back the weeds. 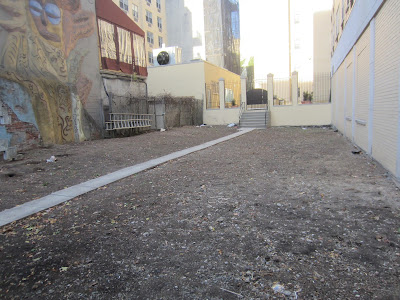 [Photo from November]
Posted by Grieve at 4:20 AM

This is big money moving in, not piddly Croman money. We can only expect more developers on C moving forward unfortunately, here comes luxury, shit.

That "lot" is supposed to be a community garden, but Capoccia kept it locked up.

This type of "cash flow" to major cities is unsustainable, period, for the cities and the nation...but here we are.

I watched NY1 yesterday and the discussion was about the uncontrollable population explosion the city is experiencing. On top of that the Bloomberg years did it best to make commenting via automobile near impossible with raising tolls for B&Ts, eliminating car lanes and parking spaces in the city to "encourage" everyone to use mass transit. What Bloomberg forgot though was that the MTA was not able to expand the subways to handle surge of passengers. The L train and tunnels is a great example of what was once a minor line serving a low populated areas of the city which now has several times the riders ever expected. I understand NY state is in charge of the MTA and funding for any work comes from them and the Feds. One of the guest on NY1 mentioned a tipping point when people will eventually leave the city do to the hassle of getting around and commenting. That sounded like a silver lining to me.

These arent two bit scammers like Cronan. They have far more money and are corporate types. They will slowly remove any stabilized tenants with lawyers not goons.

$44 million on Avenue C; if you'd said that even 10 years ago, people would have wondered what drug you were on. SMH.

Seeing how the greedy landlords/developers KEEP crawling out of the woodwork to take over this neighborhood wholesale is disgusting. It's evident that they don't see the people living here as anything but stupid, poor, older, and easy to manipulate. And we certainly aren't entitled to live in a stable neighborhood, from the developers' POV. (In fact, "people like us" should go move far away from the developers' POV - I'd say the Bronx, but even that is getting somewhat gentrified now.)

@ 9:48: I don't think many people EVER commuted to work in Manhattan. There hasn't been sufficient parking here since the big bang.

That "lot" is supposed to be a community garden, but Capoccia kept it locked up.

We all need to embrace change. This is 2016. We cannot live back in the squalor of the 70s to the 90s. As my Aunt always said, "Either adapt to whom and what is around or you will get left behind."

I am not gonna accept being assaulted, which is what this is. Dictators, demigods, facists and folks like Isis also believe we should embrace change.

There is now construction going on in the garden. Some kind of bleachers have been put up, and other funny little structures. The construction workers told me it's going to be a "garden." Maybe they're sprucing up the empty lot to make it more attractive for the multi-millionaire apartment buyers they're trying to attract.

Yes! The Garden will live again in honor of Carmen Pabon!