Report: Rat complaints on the rise 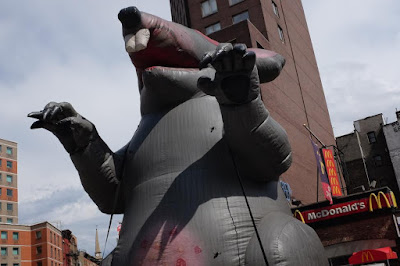 At this current pace, the city's rat complaint record set last year will fall in 2016.

As previously noted, our very own Community District 3 ranked No. 1 in 2015, according to the Health Department, as having the worst rat problem in Manhattan.

She said rats in her district ... feast on garbage from eateries and scraps left in Tompkins Square and Seward parks.

“There are more mountains of garbage on the street waiting to be picked up. Our increased development does not have the infrastructure to support it,” she said.

“The worst locations are city-owned properties. The Department of Health cannot issue summonses and clean up and charge back to the property owner if necessary.”

In related news... the trash can had been missing from the container marked "Keep Council District 2 clean" for the past four days on Avenue A at St. Mark's Place... 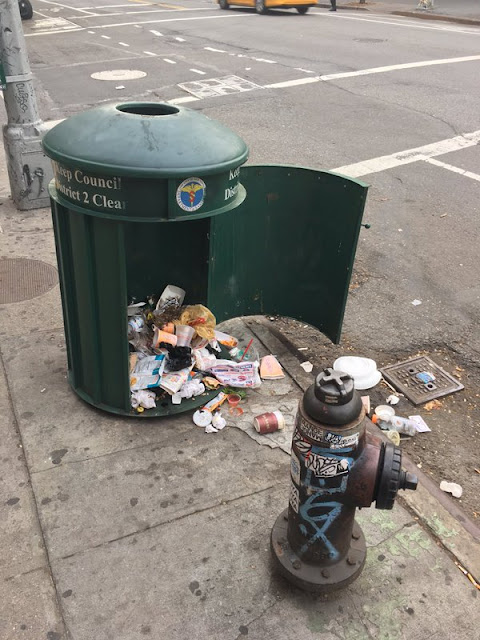 Previously on EV Grieve:
The East Village will be testing ground for a 'rat reservoir pilot'
Posted by Grieve at 8:14 AM

"The worst locations are city-owned properties."

Of course, Comrade Stetzer fails to draw the correct conclusion.
After all, she eats from the tax payers' wallet.

Privatize gubment property and watch it become cleaner and better managed. Then privatize the city clean up crews.

I got a $100 fine the other day from sanction for a bag stuck under the wheel of car in front of my building. This is not the way to solve this problem.

Sanitation supervisors are going into small neighborhood businesses asking owners to "adopt" the trash bin in front of their business by excepting trash liners and changing them. The very people giving harassing violation fines for curb not cleaned 18 inches out,sidewalk sandwich advertisement too far from building. Yet they have the gall to come around and ask someone else to do the job they are paid for. If they did the job they are paid and pensioned for with a little interest and effort instead of looking to outsource the work the rodent problem would be less.

We need a Rat Ray Gun.

Maybe if the Mayor has another press conference in TSP they will clean up the garbage...but another part of the issue is, some people are slobs.

The answer is more collection.Trash is all over the EV from residents and tourist - 6 million average per month. The city wants their business but doesn't want to clean up after them. PICK IT UP, CITY!

My building is always getting fines for having trash mixed up with recycling, improper garbage collection etc., and our landlady constantly threatens to pass along the fines to tenants. (Not sure if that is legal.) But what I always tell her is that with our building one of the few along our stretch of the block that has bins outside, we have no control over what is put inside by passersby and neighbors. In fact I have several time witnessed people from neighboring buildings putting their garbage in our cans. Not sure what the solution is here--I'm afraid that if our garbage cans were kept in the basement inside the building it would only exacerbate the rat problem.

Two comments. The big blow up rat is really not about rat infestations. It is generally used by union for strike demonstrations, but has been seen as an icon against business rats in general.

The second comment is that the EV is one big rat fest. The main reason for this is the way that both commercial and residential locations are allowed to bag and place their garbage. The city should require all establishments and residences to have, and I use this term rather loosely since it is impossible to have, "rat-proof" containers. "Rat resistant" might be more applicable because these little guys are smart not to mention they have the numbers. It is estimated that there is one rat for every person living in NYC. I think in the EV that number is higher.

The other reason is the city sanitation department. They do not provide enough public trash receptacles in neighborhoods of high volume transient visitors like the EV or the Upper West Side where humans go to eat, drink, litter, urinate, defecate and regurgitate their intake. More receptacles in the EV and less on Park Avenue and 83rd Street would be sensible, but no...we all know it won't happen that way.

So let's be clear...control the rat population? Start with the humans.

One thing I love about the city is when I go out to get a "I woke up and can't go back to sleep" snack at 3:27am and I see a rat in the distance scurrying to wherever it goes.

Always makes me think of charlotte's web or ratatouille or maus...