Without a liquor license, Dahlia's decides to close for now 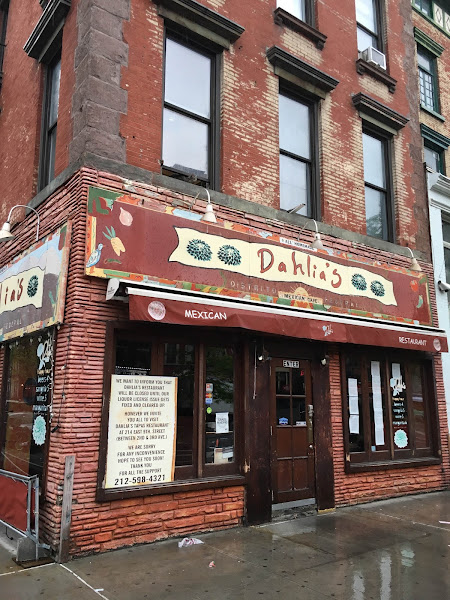 Back in February, the SLA temporarily suspended Dahlia's liquor license after serving a reported 50 minors one night.

Since then, we haven't seen many, if any, diners inside the Mexican restaurant on Second Avenue at East Fifth Street ... even with meal deals that include a soft drink.

So, for now, Dahlia's has closed until the liquor license issue is resolved, as the sign out front shows... 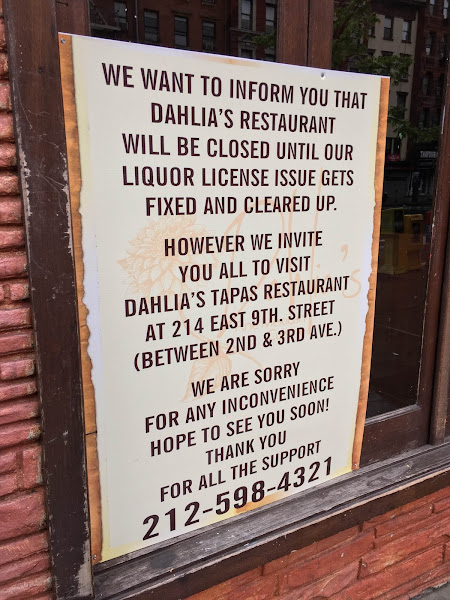 Patrons are directed to their sister establishment, a tapas bar on East Ninth Street.

According to the Post, officers from the 9th Precinct a half block away found the exits at Dahlia's locked "and more than 40 well-heeled teens — one only 15 years old — quaffing 'monster margaritas' and mojitos" one night in January.

Said SLA Chair Vincent Bradley in a statement: "In addition to demonstrating a total disregard for the law by blatantly catering to minors, this licensee further jeopardized the health and safety of these young patrons by crowding them into a locked bar to avoid detection by law enforcement."

On Feb. 12, the SLA charged Dahlia's with 55 violations, including 50 separate sales to minors, failure to supervise, and code violations for exceeding maximum capacity and having locked doors. The licensee, named as Huascar Then, was also arrested.

More about the underage drinking bust at Dahlia's; plus, reaction from NYU students
Posted by Grieve at 4:31 AM

I like how the word "issue" is used to soften the reality that this place got busted for serving a large number of minors. The 'issue: is called breaking the law.