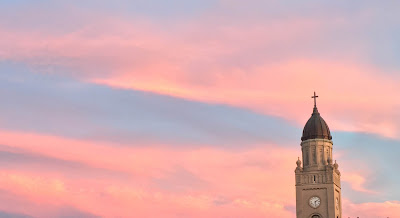 [EVG photo from the summer]

Father Sean McGillicuddy solicited suggestions for the new name via the church bulletin.

The three top proposals are:

• Most Holy Redeemer and Nativity Church

• The Nativity of Most Holy Redeemer

Possible new name aside, the neighbor told us previously that several of Father McGillicuddy's initiatives have been perceived as "ruinous" by some of the parishioners, who don't feel comfortable speaking out about the changes.
Posted by Grieve at 4:15 AM

Email ThisBlogThis!Share to TwitterShare to FacebookShare to Pinterest
Labels: The Church of the Most Holy Redeemer

Shouldn't we have a EVGrieve contest on the name?

"Most Holy Redeemer and Nativity" gets the order of those events backwards, since He had to be born before he could redeem the world (by dying; and most people don't get a 2nd act).

(And what's with that "Most"? It's not like there's a cousin Mortimer who's the 2nd-most Holy Redeemer.)

John XXIII was canonized just a year and a half ago, so that seems too much of a fashion statement.

"The Nativity of Most Holy Redeemer" needs an article, but they can probably get someone to donate one.

I don't think that "Church of the Annoying Priest but Way Cool Crypt" will wear well, but it seems to fit right now.

and why are they changing the names?

Father McGillicuddy? Are you serious? I thought that was a made-up name!

@blue glass - they're taking advantage of a recent merger (with the former Church of the Nativity) to rebrand.

This is so fucking lame, just keep the historical name. What is wrong with people, finding shit to do for no reason.