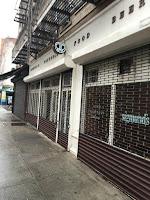 Residents who live near Sigmund Pretzel Shop at 29 Avenue B between Second Street and Third Street note that the restaurant has been closed for the past week.

The Sigmund's Instagram account only mentions their Urbanspace Vanderbilt location in Midtown. The popular pretzels are on the menu of several restaurants in the city and sold via carts at various locations and events.

In the summer of 2013, Sigmund closed to renovate the Avenue B space, from what they called a place for a "neighborhood snack" to more of a "neighborhood restaurant" featuring items such as sandwiches on pretzel buns as well as a beer and wine license. They opened here in the fall of 2009.

The closing is official.

Hadn't seen them open since last Spring. I thought they had closed down.

When all these bagel places kick, it seems that there will be a glut and with competition only the best or the ones most liked will survive. Bring back the bialy and knish!

Croxleys poco mamas and cantina dont really breed a laid back lets hang out and have a pretzel and pint crowd. Feel for Sigmunds, it was always nice to stop in for a pretzel and a beer and tip for around $10.

I went sat at nine pm and were closed that's the second time on a weekend they were closed.I saw the place intact through the shuttered window and a new fridge in the main room.They post that they are open until midnight ..:Sad ,all I wanted was pretzels and beer

Another one bites the dust....Sad