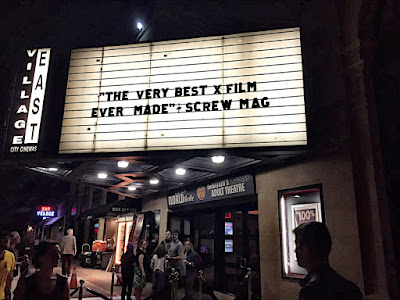 Crews for "The Deuce," HBO's upcoming drama series starring James Franco and Maggie Gyllenhaal, continued to film in parts of the neighborhood today (they were shooting a scene at Josie's on Sixth Street earlier)... the above photo via @slicksean shows the altered exterior of the City Cinemas Village East on Second Avenue at 12th Street ... transformed into an adult theater...

I am very interested to see Maggie in this picture.

I did a double take when I saw the marquee early that morning, but quickly realized, by the old 60's cars parked across the street that this was a shoot. But the little boy walking by with his parents did not and asked his parents, "what does that x-rated mean?" They didn't know what to say and quickly walked on up the avenue. Maybe they told him it was new X men movie.

Looking forward to this. Hopefully its everything that Vinyl wasn't in terms of depicting 1970s NYC.