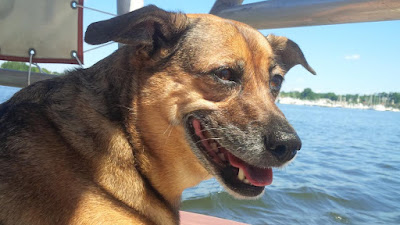 This unseasonably warm weather (last week anyway!) made us realize that it’s been quite a while since Miss Kita the Wonder Dog of East 10th Street has checked in at EVG.

Miss Kita had a very busy summer doing her best to insinuate herself into as many swimming holes (concrete or otherwise) as possible.

She also spent some weekends sailing on Long Island Sound — one of her favorite ways to piss away a summer day.

Now that the days are growing shorter she’s back to spending more time in the neighborhood and most frequently in Tompkins Square Park.

Meanwhile, Miss Kita wishes everyone a marvelous Halloween, though she herself does not celebrate the holiday.

Kita the Wonder Dog of East 10th Street is on the mend!
Posted by Grieve at 4:10 AM

Kita......psssst.....Kita, c'mere......I think I got a deal for you and 'da gang.....there's this guy runnin' for President of the humans and he's lookin' for votes ANYwhere.....dead people, people who WISH they were dead (considering the choices), mascots, babies, clowns (of ALL persuasions), angels (lapsed and otherwise).....and now he's goin' FULL ANIMAL!

It's a 100 bucks a vote (50 for cats....not sure why the lack of respect for the pussies).....but you gotta know how to pull a lever, and keep the paws clean in that they might need pawprints for ID.
His name is Drumpfster, or somethin' close to that. Yeah, you remember Runtfuck Rudy? He'll be out in the back alley around midnight tonight speadin' the cream..... but BE CAUTIOUS....'dat bitch is C R A Z Y as ever!
STILL knocks me out that these stupid humans think they are in charge....of ANYthing. Better for us compadre. Be safe brother.

Welcome back, Kita, you've been missed!

Kita doesn't go to the dog parade? Poor dog! I bet he would love it. What's wrong with dog owners these days?