At the Moxy hotel protest on 11th Street last evening 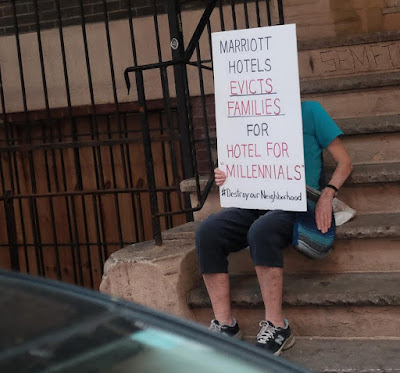 A group of residents, preservationists, local elected officials and union reps came out early last evening to protest the incoming hotel by Marriott's Moxy brand slated to replace a row of buildings at 112-120 E. 11th St. between Third Avenue and Fourth Avenue.

The speakers blasted Mayor de Blasio's administration, who despite the purported dedication to affordable housing, is allowing the 300-room hotel aimed at millennials to move forward.

According to the Greenwich Village Society for Historic Preservation (GVSHP), who helped organize the rally, the five buildings were ruled "landmark-eligible" by the city in 2008. However, when the buildings faced the threat of demolition this past summer, the city said that they no longer qualified for landmark status, per GVSHP. 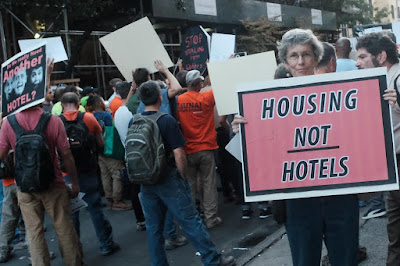 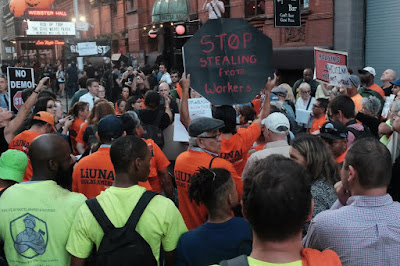 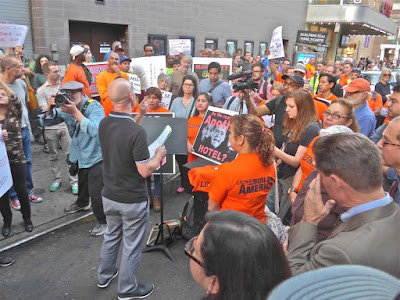 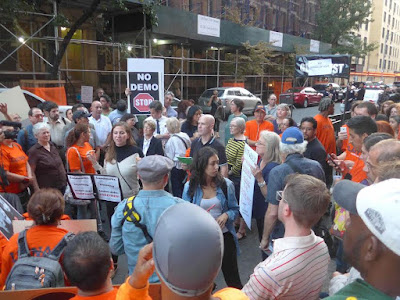 Here are a collection of comments distributed to the media following last evening's rally..

"Community groups, preservationists, affordable housing advocates, and labor all agree that this development stinks. Something is wrong when a Mayor who claims to care about neighborhoods, average New Yorkers, affordable housing, and organized labor allows his campaign contributor and political ally to avoid landmark protections so he can demolish historic buildings with affordable housing to put up a high-end hotel with non-union labor. Preserving these buildings and the housing they provided represents everything New Yorkers and residents of this neighborhood want; the hotel plan represents everything they do not want." — Andrew Berman, GVSHP Executive Director

“It is disappointing, but sadly not surprising, that a project like Lightstone Development’s Moxy Hotel on 11th Street has been approved by the City of New York. Disappointing because it will eliminate desperately needed neighborhood affordable housing, provide no decent career pathways for New Yorkers, and is being driven by a developer known to use contractors with a history of safety violations and worker exploitation ... Not surprising because Mayor de Blasio’s appointment of Lightstone’s CEO David Lichtenstein to the EDC raises serious concerns about who is watching out for the public good of the city’s economic driver plans." — John Skinner, President/Political Director Metallic Lathers Reinforcing Ironworkers Local 46 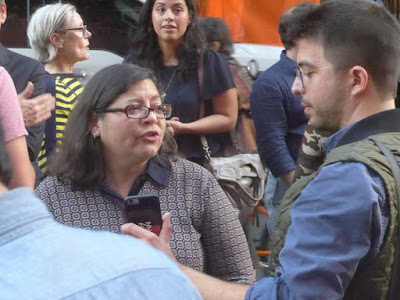 [Photo of Rosie Mendez by PB]

"I stand by my original statement and my continued disappointment that we are losing five buildings in my district that contained several dozen affordable rent regulated units, as well as the fact that these were architecturally and historically significant buildings built in the late 1800s. Instead we will have a hotel that will be architecturally out of character and out of scale with our neighborhood. I am extremely disappointed that this mayoral administration has not come forward with any legislative/zoning solutions to prevent these types of 'as of right developments' from reoccurring. — Council Member Rosie Mendez 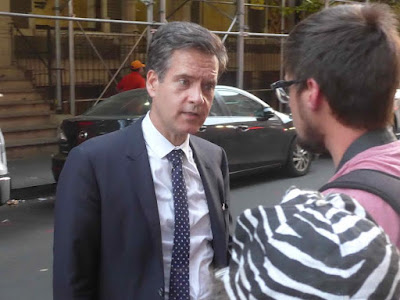 [Photo of Brad Hoylman by PB]

"It’s wrong that units of affordable housing on an historic East Village block are slated to be demolished and replaced forever by expensive hotel rooms by a developer who has a poor safety record in protecting workers. This case is a glaring example of the work we need to do to protect the historic fabric and character of our neighborhoods and ensure we use union labor for new construction." — State Senator Brad Hoylman

Permits filed to demolish 5 buildings on 11th Street to make way for new hotel (58 comments)
Posted by Grieve at 10:16 AM

I cannot wait to vote against the Mayor at the time of the next election, that's if his term is even completed without his having to step down.

If this Millenial playpen has a roof deck, 311's going on speed dial.

Of course if will have a roof deck, otherwise it would be for baby boomers.

Well alright! Heartening to see that kind of turnout.

So horrible that this is happening - loss of housing, buildings and neighborhood character.


And a hotel inevitably transforms a residential area into a commercial area - the start of a tsunami that destroys residential communities.

It was a great turn out. To bad it was allowed it proceed. Our local leaders did nothing to notify the nabe of the pending hotel plans to organize an earlier response. Then they come out and say they are against it. Sloppy and inconsiderate representation by our pols. I will vote against all incumbents. THERE MUST BE SOMEBODY OUT HERE WHO CARES ABOUT US! AND IS WILLING TO RUN FOR OFFCE.

Blows Against The Empire back in the Village again....GOOD to see.

Yeah it's definitely the millenial's fault! They're the generation who stocked the landmark preservation board! They are also the vast majority of the city council and I believe billy D is what, 27, 28 years old now? And I'm sure the developers are a bunch of 24 year olds fresh from business school. Damn millenials, always time traveling to screw things up for the boomers.

How is it that they could legally evict rent regulated families to make way for a hotel development? Were there buyouts? I don't understand.

diblasio thinks he is donald trum and that rules do not apply to him.
money, good or bad press, money, rubbing elbows with famous people, money - that's what is important to him.
he is blatently unconcerned with the poor or middle class. he doesn't even tell a good liel
our local elected "officials" are better at spinning their concern for the unwashed not rich or famous but that's as far as it goes.
what is needed is a good attorney.

Marriot is really fucking up here.

If the construction crew are non-union workers, someone should call the unions to stop the work. This will slow down the progress of work and east villagers will have more time to protest the building of the hotel.

...and where was the mayor? all tuxed out at the Al Smith dinner, with Don Comic-orleone.

@1:08am, any slowdowns of non-union work by union interference would be absolutely nothing compared to the incredible slowdown and cost overruns if the union had the job. If you really want to put a stake through the heart of this, convince them to use the union.

a) Hotels are housing albeit temporary
b) Want for housing sites? Raze the community gardens which are rat condos and open up areas for development like Bklyn, Qns for taller buildings and even Governor's Island.
c) Pay more in taxes to build more city owned low rent housing
d) Vote for a Mayor that sticks to their platform
Just saying.