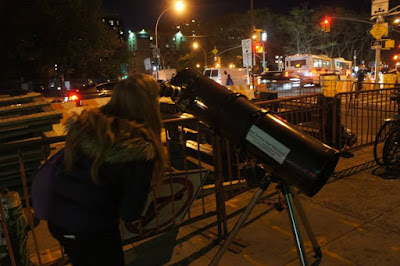 Let's start by cutting-n-pasting this from National Geographic:

Sky-watchers are gearing up for a super-sized moon that will grace evening skies this Sunday, October 16. The so-called hunter’s supermoon kicks off a lunar triple play happening over the next three months.

This month’s full moon is known in North America as the hunter’s moon. That’s because in other months, the moon rises about 50 minutes later each day, while the October moon rises just 30 minutes later. That offers more light overall during a 24-hour day, which came in handy for traditional hunters. [Ed note: Does this make it paleo?]

This month, the moon officially reaches its full phase at 12:23 a.m. ET (4:23 UT) on October 16, which means that the lunar disk will appear nearly equally full on the nights of both October 15 and 16.

Last night, local astronomy buff Felton Davis has his rig up on Second Avenue and East Houston for some supermoon viewing (top photo) ... Unfortunately, not everyone was buying it...

And here's a view after midnight and early this morning via Bobby Williams... 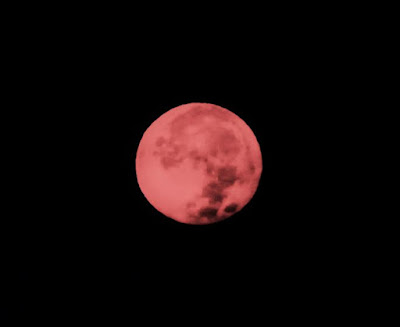 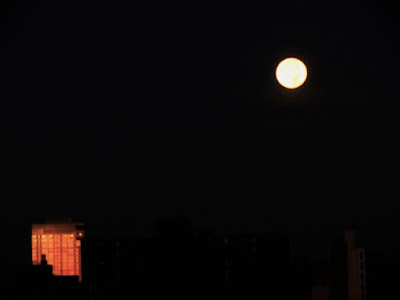 And why does the moon have a reddish tint in the first photo from Bobby? It's sunburnt, of course.

"The orange colour of a moon near the horizon is a true physical effect. It stems from the fact that - when you look toward the horizon - you are looking through a greater thickness of Earth’s atmosphere than when you gaze up and overhead.

The atmosphere scatters blue light - that’s why the sky looks blue. The greater thickness of atmosphere in the direction of a horizon scatters blue light most effectively, but it lets red light pass through to your eyes. So a full moon near the horizon — any full moon near the horizon — takes on a yellow or orange or reddish hue."

Anyway, keep an eye up tonight... and I believe Felton will be back on Second Avenue and East Houston for a better view...
Posted by Grieve at 9:40 AM

Kinda surprised that this Moon Over Middletown post turned sooo political towards the end.....into an actual ROO-SOO promo:

A Drumpf-Bentz ticket promo if I've ever seen one.

(OK...OK....it's a stretch, but I'm all alone out here in the Canadian wilderness with a freakin' satellite dish on my head pullin' in the netcon; by accident gulped down 3 times my Sunday Morning Medications, and the rabid ferrets keep nippin' at my balls.......I NEED AN OUTLET!)

(And Eden is ABSOLUTELY correct......I can see the biggest fuckin' pully system you have EVER seen on the Northern horizon....I'm OFF.... to investigate....could be dangerous.....I love you ALL!)

There will be a one-hour occultation of Aldebaran in the constellation Taurus, by the waning gibbous Moon, starting at 1:40 am early Wednesday morning, October 19th. How many people would drag themselves out of bed and come see it if I set up the telescope?

Felton: I'll be getting home from work around 2:30am Wednesday and have to to walk the dog