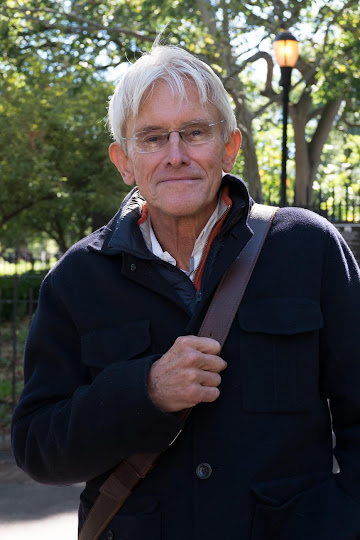 I’ve been here since the early 1980s. I was born in New Zealand, and I went to Canada on a graduate degree scholarship when I was a young man and dropped out of a Ph.D. program and came to New York City. I originally lived on 1st Avenue and 9th Street.

It was completely like a foreign culture. Canada was very restrained, like where I grew up, and New York City was very exuberant and brash. It took me a year, at least, to find a voice loud enough to be part of it. It was a bit of a culture clash almost, even though we both spoke English.

Everyone had aspirations; they were aspiring dancers, or models, or singers, or actors — or something like that. They were very self-centered in a way. It was hard to break through to them, so I didn’t really pick up friends from there, but eventually I picked up friends from other places.

I had sort of clubby friends, and one of them was Ann Magnuson. She moved to Avenue A around this time in the early 80s, and that was considered radical. I moved across the park to Avenue B, and it wasn’t safe, but nothing happened to me. My partner got stabbed once. Someone stole his backpack and then stabbed him in the back. I was always a little bit cautious, but I was never that worried.

One of my first friends in New York City who is a friend today, he and his brother opened a nightclub in the 1980s called Area. These were the days where sort of anything went. After work I would go there. It was very exciting. I was not a drug taker like everybody else but that didn’t mean that I didn’t enjoy myself.

At the time, I worked in restaurants like everybody else. Like a lot of people who dropped out of Ph.D. programs in the 1970s, I ended up cooking for a living. I had my own restaurant called the New Nile. A Spanish friend of ours did a huge magical mural on the inside. The restaurant that I owned was one of the originals in Tribeca, down on Warren Street in the City Hall area. It was open at night, and there was only one restaurant down there — the Odeon.

There was only one condominium that was residential in that neighborhood and it was across the street, and so we had neighbors and friends at first, but because we were close to City Hall our business was stronger at lunch than it was in the evenings. I wouldn’t say it was a financially a hugely successful place, but socially it was pretty great. It was very fun. Then I went back to school, and now I have a psychotherapy practice.

I’m still very fond of the East Village, and I like the fact that I can go to a concert or a play, and I can come back at 11 pm and still have dinner. I think something similar about the neighborhood then and now is the diversity. We have a very diverse community. People have been living there for as long as I have, and there are new ones. I don’t mind the students.

The strange thing is that my building is sort of a micro-perspective of the neighborhood — it changed extraordinarily. I live over on Avenue B and 9th Street with my partner of 30 years, and there are a few oldsters in the building, but the majority of the apartments have been renovated and they’re [full of] NYU students. You get a contact high as you walk up to your apartment, and they’re paying five times the amount that I am.

"Everyone had aspirations; they were aspiring dancers, or models, or singers, or actors — or something like that." Frankly, above all else, this is the most gaping hole in the character of this place today.

The moral of this story is the East Village is becoming a very different place from what it was 10, 20 or 30 years ago for those of us that have lived here that long and remember it. It will not go back to the days of artists, writers and musicians and a place where low income people can make a life for themselves. As with the rest of the city there is a lot of (International) money being dumped here as investment with no concern for the present population and that population's ability to make a living wage or run their own businesses. Even our supposedly "socialist" bent mayor has done little to protect the lives of the people which put him in office. Even private people must submit to the nameless and faceless masters and their investment strategy in our city(s) development. We are now seeing the so called benefits of trickle down economics compounded with the removal of all government control of corporate greed and the dismantling of the middle class. If you are young enough and can't swing the rent here I suggest you find an affordable place to live elsewhere before the tide of greed finds your new "artsy" neighborhood and makes it "safe". If you have been around for more than 30 years I hope you have managed to save something and think Mexico could be an alternative.

Followed the Ann Magnuson link and watched the discussion panel for screening of Downtown '81.
Interesting. I remember a lot of those people. Still have never seen that film. Wish I had known of the MOMA screening just a couple weeks ago.
http://annmagnuson.com/2016/10/15/video-tim-lawrence-moma-panel-discussion/

His partner gets stabbed in the back After giving up his backpack, and Grant says, "but I was never that worried. " Since Grant is a psychotherapist, he should be familiar with the concept of "denial." I lived just a couple of blocks from Grant (though I do not know him at all), went to Area, Odeon and even had a few conversations with his friend Ann M. I can tell you, after three muggings and an eleven stick scar from a knife wound on my face from a mugging, that I was more than a little bit cautious. No level of culture is worth death and pain and fear. I look back at how equivocal I was about living in the EV in the 70's and 80's and think I should have been more of an activist for personal safety and against crime. As a white male, I had my moments, but I shudder to imagine the pain and fear felt by the elderly, single moms with their children and young teens trying to avoid the gangs in the projects.
EVGrieve is brilliant but too often we read about overly romantic views of the EV rather than the reality that many people suffered so people like me could enjoy clubs, art and a bit of pretension.

Those of us which lived here during those days might be glossing over the bad stuff but just about everyone I know had been mugged, burglarized or worse. My first week here included 4 men breaking into my apartment while I was sleeping (I talked them into leaving somehow), had my rent money stolen from my apartment when I left for an hour, and was mugged by 2 guys who held what they said was a gun to my head to steal $6 dollars. Yes I remember all that stuff but I also remember feeling that I was never really alive until I lived here. How I met so many great people and so many were doing super cool stuff and people were truly free to be who they were while respected other's choices not to mention being able to live on a dime.

My apartment was burglarized 5 years ago on E. 12th Street! Yay! It was sooo awesome. Cops did next to nothing. Bad old days still here folks.

I loved the New Nile, a fellow student at SVA did the mural and we went down to see it. Got hooked on the place. Still remember the Bluefish. Only place I ever liked bluefish. Still remember the stairs down to the WC and the hand made booths with cushions along the wall. Once brought about 10 international clients there for dinner, great fun!!!!