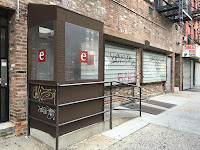 As we first reported last Monday, Evelyn Drinkery has closed after four years at 171 Avenue C between 10th Street and 11th Street.

Now Robert Ceraso, who along with Jason Mendenhall, owns The Wayland on Avenue C and Ninth Street, has confirmed that they will be taking over the Evelyn space for their Drift Inn concept they've been planning the past year.

This marks their third attempt at opening another bar along Avenue C. Plans for both the former Duke's space and current Royale fell through.

This is how Ceraso explained the concept in October 2015:

"We envision The Drift as a laid-back bar that takes some slight inspiration from small seaside bars that we’ve been in over the years. The little places that have a mix of locals, surfers, backpackers and expats. My partner Jason and I have had a lot of experience in those bars over the years and the feel of those places has a special place in our hearts."

And today: "Concept is still the same. Laid-back neighborhood bar. No cocktail list, no TVs. Just a good jukebox, couple of tacos, reasonably priced drinks and maybe a shuffleboard table if we can fit one."

"Honestly, the space is really great and screaming to be a slightly divey, dark and warm neighborhood bar," said Ceraso, who also owns Good Night Sonny on First Avenue and St. Mark's Place. "We don’t have a lot to do. We hope to be up and running before the New Year."

Previously on EV Grieve:
Wayland owners catching a Drift on Avenue C
Posted by Grieve at 4:30 AM

Email ThisBlogThis!Share to TwitterShare to FacebookShare to Pinterest
Labels: Evelyn Drinkery, The Drift, The Wayland

I have nothing for or against these guys, but how many bars do you want to run in the nabe? I am intrigued by the seaside inspiration, we are an island after all, though an unsurfable, unswimmable one, and the backpacker's we attract mostly sleep in the parks and streets...

I have something against them. These millenial era bars have no staying power and clearly don't make enough money to endure. Who or what are funding these failing ventures? Banks, venture capital firms with ceo and vp college dropouts?

Just my opinion reading this site. Which shows these types of businesses opening and shutting down with every other post.

I can't believe, based on the Wayland, that this would be a neighborhood bar. And Kaz is right down the street if you want local color.

I don't see the Wayland shutting down anytime soon. Also, these guys actually try to be a part of the community but all you malcontents just want to ignore that and shit on them.

The bros and millennials dominate this landscape, especially during the weekend, which I can't avoid, seeing as I live on 7th and C. I digress. I'll try not to lament my disgust with the many who scream and vomit like maniacs for hours right outside my door each Friday and Saturday. This area has transformed since I moved in 2010 in many ways for the better. What I enjoy is the ample food choices it now offers. What I don't enjoy is the stupid drunkenness of the privileged and entitled who frequent the bars, who are oblivious and disrespectful, to those of us who reside here, who just seek some semblance of peace. This impending announcement from the geniuses behind Wayland is what seems to be yet another recipe for disaster. I understand the younger set ( I am now 40; probably an old fart compared to the twenty set) require spaces to let loose and run wild like horses, but not at the expense of myself or other hard working neighbors who didn't sign up for this shit.

No offense, but Kaz is horrible. I miss Cafecito.

You win the Asshat of the day award. No staying power? The Wayland is the best place in the East Village, as you read time and time again in reviews (real reviews from publications, not patron reviews). Are you just jealous? Obviously you don't know what a classy place, excellent cocktails or great food is. Just keep your sour jealous attitude out of their places, Asshat s don't fit in well anyway.

You have people who were born and raised on Avenue C showing up at the community board, begging for them to do something about the shit-show on Avenue C. Residents begg for a closed the facade, stating they would have to move otherwise, one woman even had soundproof windows installed, ok.

Oh you want that, well nooooooooo, this is what is good for you and you will just have to swallow it.

I have an idea, lets bring back Mickey's Blue Room!!!

I love how people bitch that the East village has become too upscale and they miss the old days of drugs and craziness. Then turn around and bitch because the bar patrons are too loud. Which is it?
The guys at the Wayland did TONS for me and for my neighbors during Hurricane Sandy. They've supported every single fundraiser since - of which, we've thrown 8. They are good guys. Yes, on the weekends, the clientele is young and can be rowdy. But that's hardly their fault for making a great space that attracts young people.
It's also NYC, folks. If you don't like noise and craziness, move to Iowa. Or, Park Slope is nice apparently. Anyone wants to have a drink ... I'll be at Drift, Sonny's or Wayland.

Noise is one thing, craziness is enough. How 'bout YOU move to Iowa? I hear there's lots of open space to act like an ass out there.

When longtime neighborhood residents complain they're not the problem you're the fuckin' problem.

You can be young and respectful - see Coney Island High, CBGB, Spiral Continental when it had live music, etc. Bowery Electric and Mercury Lounge now. But I bet you weren't around then to know.

To ANYONE who complains in NYC, YOU'RE the problem! I've been here 10 years, apart from growing up in the burbs. Since the day I moved in, I love it. Everything about it. The food, the drink, the jackasses hootin' and hollarin' even when I'm off to bed early. I don't like some things, but I surely don't waste my time complaining about them, I'm too busy enjoying life and having fun! Get a life if you complain about anything in NY F'n C!