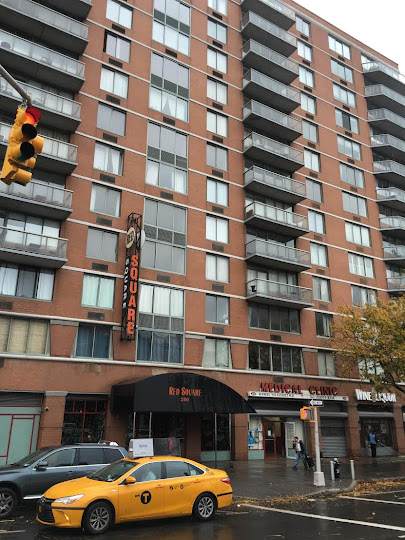 Back in August, news broke that Red Square, the residential complex at 250 E. Houston St. between Avenue A and Avenue B, was in contract for some $100 million, according to published reports.

Ahead of the final sale, the statue of Lenin was removed last month from atop the 13-floor building. (It will reign again nearby on Norfolk Street.)

Now a building resident passes along a letter that he or she received from the Dermot Co. announcing the new ownership... 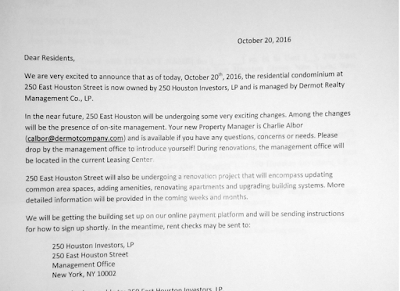 The new owner is 250 Houston Investors, LP, and is managed by Dermot. (A news release on the deal, which didn't disclose the terms, states that "The Dermot Company, in partnership with Rockwood Capital, LLC, announced the joint-venture acquisition of 250 East Houston St.")

The letter to current residents also notes that 250 East Houston (the name Red Square has apparently been retired) "will be undergoing a renovation project that will encompass updating common area spaces, adding amenities, renovating apartments and upgrading building systems."

According to the reader, one of the first actions by the new management was to "cut the staff salaries by 30 percent. The doormen were making around $16/hour, now cut to $11. They were given ONE DAY to accept or leave. Not being union employees, they had little choice."

The reader continued: "Should be interesting to see these new owners try to sell this place as 'luxury' with unhappy employees."

Meanwhile, another Red Square 250 E. Houston St. resident wrote in to say how treacherous the building's elevators are.

Both elevators at 250 Houston have been malfunctioning for more than a year. Shoddy and ineffective repairs are being made as often as 4-6 times a week and have not alleviated severe problems in either elevator.

And what about new ownership?

The elevators need immediate and substantial repairs. The new management will replace them — there's even a rumor that they are going to take both offline to do that.

I don't feel safe using them — and they shouldn't be allowed to operate that way for the next 6-12 months.

The building, which features 130 rental units, also has 23,000 square feet of retail space. According to the Post last August, the retail space was not going to be part of the deal. There are four vacancies in this strip of shops, which include a Dunkin' Donuts, Subway (sandwich shop), Sleepy's (for the rest of your life), China Town Chinese restaurant and a FedEx Office Print & Ship Center.

Per Streeteasy, there are currently two rentals available. A 2-bedroom apartment with balcony for $4,875 and a 1-bedroom unit for $3,000.

The building, the creation of Michael Rosen, opened in June 1989.

Previously on EV Grieve:
Rumors: Red Square has been sold
Posted by Grieve at 4:30 AM

Sounds like thugs are going to run this place. Go for the weakest (non-union) employees first, remove any chance of a living wage then aim your sights on those paying the lowest rent. Scoundrels.

Rockwell bought dermot about a year ago dermot had 101 ave d and like 10 other buildings.

I assume these apartments aren't stabilized. I wonder how far they'll try to raise the rents.

This is not a surprise... the top dogs at Dermot are Trump supporters ...

That statute should have never been put up.

Funny how "luxury" has come to mean screwing over labor. Yep, faux marble countertops sure are worth cutting someone's living wage!

I don't know how much of a difference it would make, but it would be admirable if the tenants got together and approached the new owners to complain about the pay cuts and also reach out for more press on that. The owners and developers come in here and take over the neighborhood and make so much money and won't even pay a living wage.

Labor needs to see the upside here. Once rentals become condos, new owners will increase tips dramatically (due to being much richer, albeit denominated in RMB instead of USD). On the flip side unlikely to be occupied, unless their kids happen to be doing gap semester at NYU.

let all your ultra wealth Chinese friends know that they can probably still score a green card by investing with this developer as well, in addition to purchasing condo/CCP meltdown lifeboat.

I feel bad for non-union workers they always seem to get the short end of the stick and there is nothing they can do about it.

"I feel bad for non-union workers they always seem to get the short end of the stick and there is nothing they can do about it." That is why unions are good for blue collar workers despite what Republicans have been saying since Reagan.

There's no reason to expect accountability from these sorts of investors any more than from a guy at a craps table. Because that's basically what it is, not a long term investment strategy, but gambling on the real estate bubble. What could quality building services for tenants possibly have to with that? It'd only sap the cash flow that could be put down at another table, er, building.

If anyone wants to organize a protest against paycuts for doorperson and I'm guessing other building workers, please feel free to use the above math.