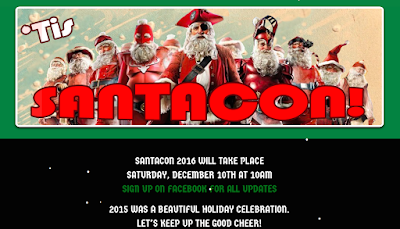 The organizer's of SantaCon have announced the date for this year's SantaCon — Dec. 10.

There's a Facebook event page to follow for more details. Not much is known now, such as what bars are participating this year and what other neighbors will be part of this.

Gothamist reports that it will start in Williamsburg. After that, who knows.

In 2015, SantaCon kicked off in McCarren Park before departing for the East Village.

The Daily News reported that the NYPD made five arrests and handed out an even 100 summonses — ranging from open container violations to disorderly conduct to public urination — during SantaCon in 2015.

Previously on EV Grieve:
SantaCon announces its path through the East Village for 2015

A SantaCon 2015 postmortem (first of several perhaps) and a look ahead to next year! 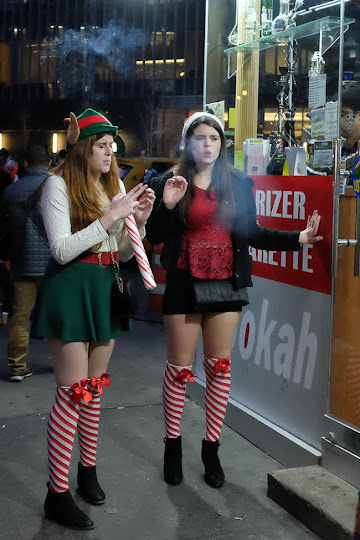 [Photo from SantaCon 2015 by Derek Berg]

Email ThisBlogThis!Share to TwitterShare to FacebookShare to Pinterest
Labels: SantaCon

Lol these two girls look like the never smoked before, which is a good sign not to start.

Here come the comments....
Do we really suspect that this gift to theme and sports bar will be centered anywhere other than the East Village?
There is something more disturbing than the over drinking about this "charity event" that bothers me, it's the lemming like culture of it all. I think about how all this energy could go towards something that really benefits the individual and possibly a real charity while not putting out the neighborhoods which it ravages each year. I see no end in sight as the colleges each year are refreshed with young people that can't sadly imagine anything more fun than this.

Thanks for the tip time to head out for the weekend

Bring it on. After a summer of bottomless brunches, we can endure one more day of drunken innocence.

these two girls look like the never smoked before

They look like they have been smoking since eighth grade.

I still don't get the appeal of Santacon. And I'm someone who tailgates at Giants games., dresses up for Halloween parties and drinks too much in general

Are we going to hold Jim Glaser responsible this year for presenting a plan that would surely PREVENT a widespread shitshow, rather than permissing him (under the cover of pseudoanonymity) to push forward with any plan for a traveling party that suits his interests?
(And that just so happens to usually be a plan that gets a bunch of willing bars to serve as pit stops across the city, with little security, in exchange for a percentage of the bar receipts to fatten up Kostume Kult's bottom line)

The reason we have Santacom in the EV is that our politicians have no clout. And they are told by the Police/Mayor/Whoever that its ours. Get over it. I keep asking where our politicians are. But it seems we HAVE POLITICIANS IN NAME ONLY. WE ARE ALONE.

I for one, welcome our drunken santa overlords.

SantaCon, the one time of the year that I completely agree with all the bitching and moaning that goes on in the comments of this blog.

Complaining about Santacon is akin to complaining about gentrification... I suggest either planning a weekend out of town (always my plan) or spend the day on the UES with a museum crawl.

WE REFUSE TO ALLOW THE ORGANZERS TO HIDE WHILE THIS EVENT
MAKES US ALL MISERABLE EVERY YEAR BY BRINGNG THOUSANDS
OF SCREAMING, VOMITING, URINATING DRUNKS TO OUR DOORSTEPS!

**** THIS EVENT PROMOTES RAPE CULTURE ****
DRUNK WOMEN ARE GROPED AND TAKEN
ADVANTAGE OF EVERY YEAR!

HELP US TAKE BACK OUR NEIGHBORHOOD!

WHEN: FRIDAY, DECEMER 9TH AT 6PM
WHERE: MEET AT SW CORNER OF 11TH ST AND 2ND AVENUE

No, because Santacon can and should be stopped and isn't dependent upon market value.

I see no reason to be held hostage or having to flee my own home because a group of spoiled adultkids who don't know how to party are being protected by the shadowy group that's behind this shitstorm.

I like that photo. It captures a certain naive cluelessness (among other things) in a way that words can't fully do.

Same weekend as the St. Nicholas Christmas Cookie Walk takes place. Guess I'll run out at 11 AM, fill up a big box, and then retire to my abode to binge-watch something on Netflix and snarf buttery goodness.

I wouldn't care if these people gathered in bars and drank and had fun but they take over the sidewalks and harass people who don't want to engage with them and puke everywhere. It's unbelievable that the city allows this to happen.

How does Santacon get away with happening as it's clearly a march and you need a permit to march, right?

The East Village is nothing more than downtown (pick your college town) now.

This shit show illustrates how the city government sees the EV and to some extent Williamsburg as not so much a residential neighborhoods but night life (Vegas strip) part of the city. Fuck those that live here, let the kids do what they please and make the residents clean up after them. There is no place in the city which as the drinking saturation as the EV and Hell Square just south of us. Why should we put up with this, why not move this horror to the UES or UWS? Because those people would bring a law suit against all involved and use their connections with the city to stop it. We're fucked.

That's an awesome photo, perfectly illustrates SantaCon in the here and now. I wonder what those girls are doing now and if they're still living here. If they are, will they recycle their get-up for this year or do something different?

I miss the punk, goth, new wave, and art girls.

The EV bars I go to don't allow SantaCon and its FREE entertainment to sit up front and watch them try to get in. It's a blast. Can't wait!